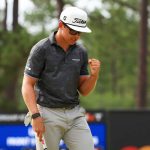 Garrick Higgo's back-nine 32 was the catalyst that vaulted him to his first career Tour victory.

It makes sense that at the event that was supposed to be the Canadian Open, eventually held in South Carolina, that just about nothing would be normal at the The Palmetto Championship. It was one of those weeks on the PGA Tour where anything could happen. And it did.

For starters, there was Chesson Hadley, who blew a 4-shot lead in the final round, limping in with a bogey-bogey-bogey finish to lose by one. There was the no. 1 player in the world, Dustin Johnson, who flirted with the lead with just a few holes to play, only to make a triple bogey on the 70th hole of the championship.

There was Tain Lee, a former D-III golfer who riled up support on Twitter all week long, earning his first world ranking points since 2016. There was even Bo Van Pelt, who was playing in this event after a strung out exemption afforded him a spot in the field, pushing his name to the top of the leaderboard with just one hole to play.

Lastly, there was Garrick Higgo, the actual man of the hour. Playing in his second career Tour start, an up-and-coming talent from South Africa, it was Higgo who posted the quietest back-nine 32 of his life, finding out he won from the practice area.

Higgo was the last survivor of a contending group who all faltered down the stretch at Congaree. With about an hour to play, the CBS broadcast team made a clear expectation: 14 under would probably do the trick. Soon enough, Higgo was the only one who could boast a tally of 11 under.

“It’s amazing,” Higgo said right after the win. “I just stayed patient all week. I’ve worked so hard with my coach, Cliff, on my short game and my putting. And all the guys at Titleist. I guess all that has paid off.”

For further proof of just how goofy this tournament ended, take DataGolf’s score probabilities. When Hadley made the turn, their probability algorithm listed 11 under’s chances of being the winning number at just 0.15%. Or about one in 650.

Higgo winning, on its own, is no true shock. DataGolf ranked him as the 132nd-best player in the world entering the week. He’s played near a PGA Tour average level for most of the last 18 months, winning three times on the European Tour in the past year. In his first non-major PGA Tour start, he’s earned full membership for the rest of this year and the two seasons that follow. Life is good for the 22-year-old, who will now move into the top 40 in the Official World Golf Ranking.

As for Hadley, the contender whose Sunday wounds will likely sting the most, he seemed to have plenty of immediate clarity in how things went down at Congaree: “I can only imagine what it looked like on TV because it looked freakin’ awful from my view. I mean, I could barely keep it on the planet.”