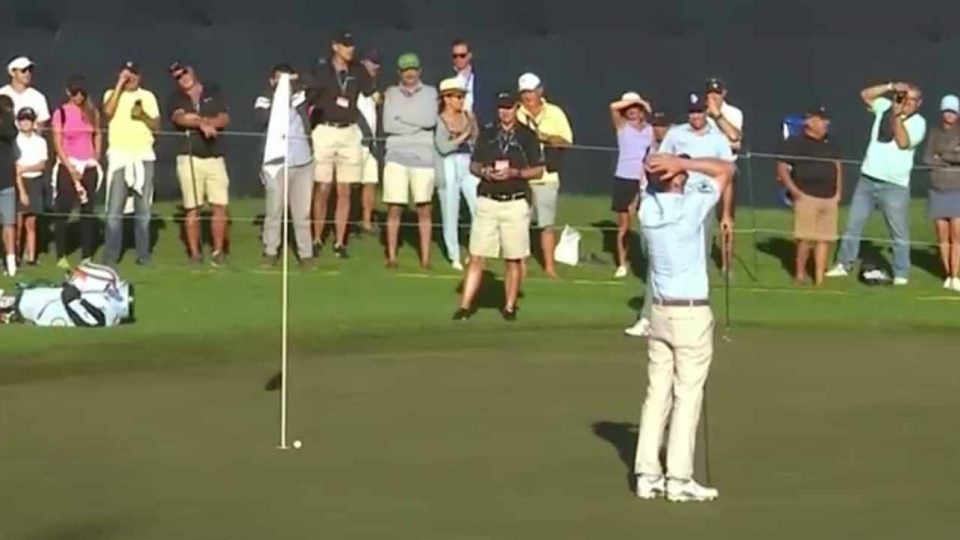 Vaughn Taylor faced an important birdie putt on No. 18 at Mayakoba — but left it just short.
Golf Channel

Vaughn Taylor could have blamed slow greens or bad luck. Instead, he blamed his own nerves.

Sitting one shot back of leader Brendon Todd, Taylor faced an uphill 15-foot birdie putt on the 18th hole at Mayakoba. With Todd staring at a four-footer for par, Taylor knew a make would guarantee at least a spot in a playoff. He studied his putt, a slight right-to-lefter, and started it perfectly on line — but left it hanging on the front edge, just short of the hole.

Taylor put his hands on his head and stared at the ball in disbelief. He reluctantly tapped in for par and a three-way tie for 2nd at 19 under, then watched as Todd finished off his second consecutive win.

After the round, Taylor guessed why he’d left the putt short.

“I’m happy with the way I played. Just wasn’t willing to go down there, so oh well,” he said. Asked if moisture on the greens was to blame, he said he thought it was nerves instead.

“Warming up this morning the greens were a little slow, but I don’t know. I was a little nervous, so usually come up short when I’m nervous.”

For his part, Todd had convinced himself he was going to be headed for a playoff.

Tournaments
Tour Confidential: Are the Rules of Golf STILL too complicated?

“Walking up to the green, I told my caddie, ‘We’ve got to get this up and down because Vaughn’s going to make it.'” Todd said in his winner’s press conference. “I think he’s a great putter and I expected him to make it, so I was a little concerned. It felt good that I had a fairly straight four-footer to match him if he did make it, so I was just lucky that his ball came up short because I think he hit a nice putt.”

The miss was a costly one. Had Taylor forced a playoff, he would have been guaranteed at least solo 2nd and $784,800 — plus more than a puncher’s chance at the $1.28 million first prize. Instead, he settled for a three-way tie for 2nd and $544,000 (I know, I know, you’re still not exactly weeping for the guy).

A victory would have been Taylor’s fourth in his lengthy PGA Tour career, but the T2 still marked his best result since winning the 2016 Pebble Beach Pro-Am and marked just his third top-3 finish of the decade. Shorted putt or not, Taylor still left Mayakoba with plenty to celebrate.