Tour Confidential: Are the Rules of Golf STILL too complicated?

Check in every week for the unfiltered opinions of our writers and editors as they break down the hottest topics in the sport, and join the conversation by tweeting us @golf_com. This Sunday we discuss the Rules of Golf, your golf scorecard, Presidents Cup snubs (again) and more.

1. Russell Henley was penalized eight strokes at the Mayakoba Golf Classic for violating the One-Ball Rule. Henley used a slightly different Titleist ProV1x model for holes 9-12, and that violation of Rule 20-3 cost him two strokes per hole (he missed the cut). This comes days after a bizarre Billy Mayfair rules controversy was reported by Michael Bamberger, and in a calendar year when a considerable number of rules infractions have made headlines. Almost a year after the governing bodies made sweeping changes to the rule book, are the rules still too complicated?

Josh Sens, contributor (@JoshSens): No. There are too many of them for the average player to expect to know them all offhand. But overly complicated? There’s nothing especially murky or obscure about the rules that have been violated recently. Where things have gotten muddy is in how certain people have responded to those violations. But that has to do with the complexities of human nature, not the rules themselves.

Michael Bamberger, senior writer: With Josh. Casual golf cannot be played with obsessive following of the rules. Serious tournament golf requires it. What Henley did show is that he could not live with himself had he known he played in violation of the rules. There’s a sound reason for that rule. If you want to get rid of it, start a petition, but you won’t get far. Henley set the right example.

Dylan Dethier, senior writer (@dylan_dethier): When I caddied for Martin Trainer at the Valspar earlier this year, we were having breakfast just before 6 a.m. on Friday when Henley walked by and heard mention of the name Joel Osteen. He stopped dead in his tracks, pulled up a chair and talked to us for some 20 minutes about the prosperity gospel and contradictions in megachurch culture. “I’m sorry, guys,” he said at the end. “I didn’t mean to ruin your breakfast.” Agree or not, I learned that day that Russell Henley is a man of principle. Credit to him for calling his own fouls here, because he was in relatively innocuous violation of a rule that makes sense.

Josh Berhow, managing editor (@Josh_Berhow): The rules are complicated, but as a pro golfer it’s your job to know the rules. (And credit to Henley for reporting himself.) But when we are playing with our buddies we aren’t arguing over the leaf rule, mulling over drops near a sprinkler head or announcing what ball we’re hitting on the first tee box. (“B1, homie,” is what I fondly remember Tiger telling Henrik Stenson at the 2017 Hero.) But yes, the rules can be a little tough to understand, but there’s only a small percentage of amateurs who actually take all of them seriously in the first place. It’s a different ballgame for the pros. They need to know. 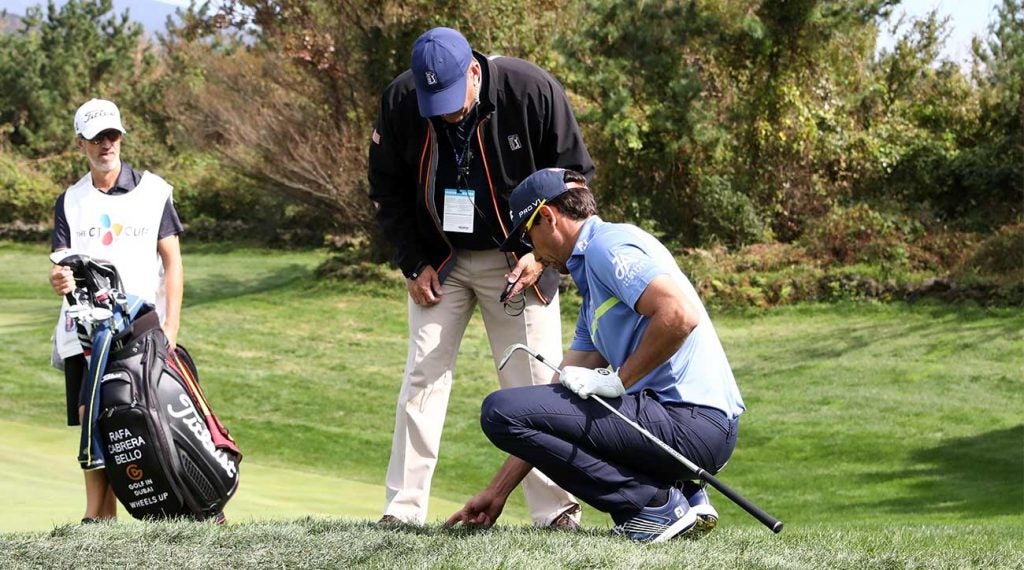 There's been no shortage of rules stories this year, on the PGA Tour and for amateurs.
Getty Images

2. PGA of America President Suzy Whaley said on last week’s Drop Zone Podcast that golf’s universal scorecard needs to change and we need “a new set of norms.” She suggested instead of having options for different tees at the top and others at the bottom (often women’s), all of them should be at the top and golfers can pick which one they want based on the color/yardage that suits their game. What other golf conventions would benefit from a rethinking/refresh?

Sens: Where to begin? Claiming honors on the tee in casual golf. Long pants required, no matter the weather. Having to buy a clubhouse full of drinks if you make an ace. Mulligans — sorry, but you’re hitting three. Before any of that, though, can I please just change my shoes in the parking lot?

Bamberger: She is so correct. If you become a slave to your USGA handicap, you miss the fun of mixing and matching what tees to play from on any given hole. This is maybe not a convention, but American golfers think they cannot advance past the ball of the player who is farthest from the hole. That is absolutely the biggest contributor to our sluggish pace. You should ALWAYS be advancing toward your ball, while being alert for the players who may now be behind you. Safety first, yes, but you can do both.

Dethier: I can attest that when it comes to speeding up play, Bamberger practices what he preaches. I’d never thought about the scorecard thing, and I do think courses are catching up to the times by picking different colors and names for their tees than “men’s” and “women’s,” but I loved Whaley’s perspective on this. For me, it’s all about making people comfortable, so rather than any specific rule, I’d love to see courses continue to focus on a specific vibe. Golf can tend to make people feel like they’re doing something wrong — let’s turn that to welcoming people to the course (and the game) instead. Oh, and the shoe thing. I don’t need to see your locker room.

Berhow: One of the most fun rounds I’ve had was at the Bandon Preserve, the 13-hole par-3 course at Bandon Dunes. We walked onto every tee box, looked around and scanned our options and said, “Ahh, how about this one?” But everyone here is right. It’s about making you feel comfortable at the course, because when you feel comfortable you play better, thus you have a more enjoyable experience and are more likely to do it again. I think some stuffy country clubs are the slowest to come around to some of these new modern norms, but they might benefit from making some of their (younger?) members feel like they aren’t walking around on eggshells.

3. Recent Presidents Cup captain’s pick Patrick Reed said the Ryder Cup controversy he started in 2018 in Paris has been “put to bed,” and there’s no lingering issues heading to Royal Melbourne. Any reason to doubt Captain America?

Bamberger: The very question is un-American. You cannot doubt the man. His name is Captain America!

Sens: Excellent dodge, Mr. Bamberger. Forgiven? Maybe. But forgotten? I can’t imagine. I don’t see Tiger Woods agonizing about a lot of his decisions in Australia. But one that is likely to give him at least a bit of pause is, Who should I stick with Reed? In that sense, I wouldn’t call the matter entirely put to bed.

Dethier: If they win, it’s (closer to becoming) water under the bridge. If things get tight, and Reed struggles with his partner? His presence comes under a microscope. Passing judgment on a one-week team event is rarely fair, but it’s pretty fair that the guy who publicly called out his captain and team just 13 months ago would take the brunt of the scrutiny.

Berhow: Yes, there are several reasons to doubt him. Just look at his track record. But winning is really all that matters here, so if Reed does his job and doesn’t cause any drama, there’s no reason to think we won’t see him at Whistling Straits next fall.

4. Jordan Spieth, Rickie Fowler, Kevin Kisner and Phil Mickelson are just a few of the players who were denied a Presidents Cup captain’s pick by Tiger Woods. Which of these players — or another one not mentioned here — is most likely to bounce back and make the 2020 Ryder Cup on his own via qualifying?

Sens: I’ll go with Fowler. Mickelson has age working against him. Spieth is dealing with serious hobgoblins. And Rickie’s got more firepower than the very talented and feisty Kisner.

Sens: I mostly just wanted to say hobgoblins. Thanks for taking up the cry.

Dethier: According to Wikipedia, “Hobgoblins are humanoids that stand nearly 6’6″ tall on average, a little taller than orcs.” That’s some serious baggage to deal with. The correct answer is Rickie Fowler, who would have made this team had he not gotten married (and picked up a subsequent bacterial infection). But Collin Morikawa may be as reliable an answer as any of the above.

Berhow: Wow, this got weird. Anyway, the answer here is quite obviously Jordan Spieth. No chance he misses two team events in a row. He’ll be eating cheese curds in Sheboygan in no time.

5. Tommy Fleetwood won the Nedbank Golf Challenge on Sunday to claim his fifth career European Tour victory, yet the 28-year-old has four runner-up finishes and no wins in 62 starts on the PGA Tour. Why do some of Europe’s best players — i.e. Fleetwood, Casey, Poulter, Monty, etc. — thrive on the Euro Tour but struggle to win on the PGA Tour?

Bamberger: Let us not forget Seve! Also Langer. Also Westwood. As Tiger said when he missed the cut at the British Open this year, “I just want to go home.” They prefer home. Most people do.

Sens: I was going to say the same — home cooking. Who doesn’t love it? Plus, the fields here are generally the deepest in the world, which is why those guys cross the ocean to play in them in the first place.

Dethier: There’s a depth-of-play issue (every single guy on the PGA Tour is intimidatingly good) and a style-of-play issue (you don’t see much in the way of linksy Tour designs) but it’s also just a statistical issue. By my count, Fleetwood has nine top-fives on the PGA Tour. Statistically, those same performances that result in runner-ups on Tour can be wins on the Euro Tour. He may not be an overachiever, but he’ll win before long.

Berhow: Winning is hard, regardless of which tour you are on. But forget winning just a regular event on the PGA Tour, Tommy Fleetwood has to be one of the few major-less pros ready to claim one of the big ones soon. It almost happened at Shinnecock.

6. A day after withdrawing from the Nedbank pro-am due to discomfort from kidney stones, Louis Oosthuizen gamely carded a first-round 63. What’s the most uncomfortable condition you’ve gutted out on the golf course?

Bamberger: Stories due and bosses calling. Wife calling. Kids calling. Bills on desk. Lawn overdue. Mental stress rising. But the promise of 89 if you can play the last three in two over overwhelms all.

Sens: Two solid years of the driver yips. I tried meditation. Hypnosis. Beta-blockers. What finally worked was a visit to a voodoo doctor in New Orleans. True story.

Dethier: Well, the most adverse conditions I played under came after missing so many cuts that I felt a desperate need to win back every $400 mini-tour entry fee just so I could feel good about eating dinner that night. But in the spirit of the question, I remember our high school golf team took two taxi cabs from school to a match one week. Our driver was used to driving his cats around with him, and man was I allergic to those guys. By the time we arrived to our match with Monument Mountain High School that afternoon, my left eye was nearly swollen shut. Safe to say I didn’t perform to the best of my abilities — and we took vans after that.

Berhow: Does firing a couple of low-90s scores during Bachelor-party weekends count? Had some gutsy bogey saves.