9 big-time winners of the U.S. Women’s Open (besides the actual winner) 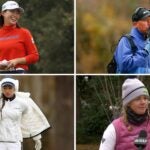 Who else won the U.S. Women's Open?

As golf’s final major championship of the year came to a dramatic conclusion, A Lim Kim planted a flag emphatically in the ground with three closing birdies and waited around to see if anybody could catch her. At home watching, we were all winners already. Watching a major play out on a Monday — in December? That’s the sort of bonus golf that brings some joy to a chilly day at the home office.

Kim’s lead held, changing the career of the world No. 94 forever. But she was far from the day’s only victor. Here are nine more.

1. Amy Olson (and her resilience)

If you watched any of Monday’s broadcast, you heard Dan Hicks talking about Amy Olson playing the final round with a heavy heart. Her father-in-law died unexpectedly over the weekend, so Olson competed under particularly trying circumstances — and showed inspiring resilience. After bogeys at 2, 3 and 4, Olson birdied 5 and 6 and then held steady with a string of pars that eventually left her with a two-shot lead.

Kim’s final three birdies changed the entire complexion of the event, but Olson stayed right in the mix until a bogey at No. 16, where she barely mis-clubbed and her ball trickled over the back of the green and into a poor lie in the rough. She needed to eagle 18 from the fairway to force a playoff, and gave it a sporting effort.

But you’d be hard-pressed to find a better moment than Olson pouring in that final birdie putt to finish in a share of second place.

“You know, we had a really special relationship,” she said. “He’s a big, tough, military West Point guy, loved the Army, but had a particular soft spot for the women in his life, particularly his wife and daughter-in-law.

“And just incredibly generous. Loved to hunt and fish, and we’ll have a lot of great memories to take from those activities, doing those with him.”

2. Kaitlyn Papp (and her future)

This one’s pretty straightforward: Papp, a senior at the University of Texas, birdied the 72nd hole of the tournament to jump inside the top 10 and secure low amateur honors for the event. That’s awesome.

“I learned that I can pretty much handle whatever conditions come our way,” Papp said after the round. “We experienced perfect weather; we experienced kind of difficult weather this week. I think I just learned that I’m pretty mentally tough out there.”

Who’s No. 1? Entering the week, the pre-tournament favorite was Sei Young Kim, who won her past two starts, including the Women’s PGA at Aronimink. But Jin Young Ko still tops the Rolex Rankings, and on Monday, she reminded the golf world why. The USWO was just Ko’s third start of the year outside of South Korea, and it was her best, too. She capped off a solid tournament with a spectacular finish, making four birdies against just one bogey in a challenging final round to post a 68 and finish T2 alongside Olson.

She needed a top-four finish to secure a spot in next week’s CME Group Championship, too, and she knew it.

“This week is my best finish at the U.S. Open, so I can play next week, as well,” she said. “I’m really thankful.”

4. Annika Sorenstam (and her legacy)

If you were browsing the USWO leaderboard on the weekend, you may have noticed the sheer volume of blue-and-yellow flags in contention. Seven (7!) Swedish women made the cut. And while established pros Pernilla Lindberg (T58) and Anna Nordqvist (T54) faded in the final round, the other five cracked the top 30.

Even more remarkable is the fact that three of those women are amateurs. Ingrid Lindblad finished T30, Linn Grant finished T23 and Maja Stark posted T13, just two shots behind Papp for low am. 5. The broadcast (and no commercials)

There was some understandable consternation when the second round of the U.S. Women’s Open didn’t get much time on television. But that shouldn’t take away from how good the coverage was when the tournament was going. Dan Hicks was an excellent anchor, Paige Mackenzie hit all the right notes as color commentator and the supporting cast was great, too — Cara Banks is a strong interviewer and Bones Mackay gets extra points for working in multiple “Fargo” references.

What’s more, the broadcast itself was incredible because it was uninterrupted. Thanks to an investment from Rolex, the entire tournament was shown commercial-free, which is wild. The continuity of the broadcast, the continuous drama, the ability to ping from shot to shot to shot — it all made for a fantastically cohesive experience. And we know viewers don’t like change, but NBC’s streaming app, Peacock, provides a pretty seamless viewing experience during off-broadcast hours.

The experience of watching the entire final round on Monday was almost surreal. Speaking of which …

6. Monday finishes (and hours of coverage)

Can we do more of these? Especially while everybody is working from home, there’s something delightful about having a tournament finish to ease us into the week. Golf makes for a terrific second-screen experience; it’s the perfect corner-of-your-monitor sport.

Typically when we get Monday finishes, it’s just the end of a playoff or a final few holes because of weather or darkness. But this time, we saw the leaders play the entire final round, uninterrupted. It was awesome, it was terrific exposure for the event, and it was a chance to get to know the competitors in a longform way. Big win for all involved.

7. Cristie Kerr (and her toughness)

Any time you dislocate several ribs in a brutal golf cart crash the week of a major championship — and then go on to finish in the top 25 at that same tournament — you officially get mentioned in this column. Just a little policy we have.

8. Hinako Shibuno (and her big-game hunting)

In most columns, the 54-hole leader failing to convert wouldn’t count as a “winner,” but this is among the most positive columns you’ll ever find in the dark, cynical internet world, and I’m here to tell you that Hinako Shibuno was a big-time winner on Monday.

Last summer, Shibuno had one of the most improbable major championship victories in recent memory, capturing the AIG Women’s Open in what was literally her first-ever golf tournament outside Japan. There was no questioning her talent — she won four times on the JLPGA in 2019 alone — but plenty of golfers have won a single major never to be heard from again. In three major starts since her debut victory, Shibuno failed to log a top 50.

Was Monday Shibuno’s finest round of golf? No! She shot 74. But she battled back, playing her final seven holes at one-under par and capping off her tournament with a birdie bomb at No. 18 to finish two shots back.

“I do have a little bit of confidence in my approaches; however, when it comes to shots, my shots weren’t preferable under pressure. So in that respect I learned a lot about myself,” she said after the round. She’ll be back.

Whenever we see golfers tackle cold weather, it’s terrific to see what sorts of outfits they break out. Zach Johnson’s oversized mittens are one look. Jim Furyk’s quarterback-style handwarming pouch is another. The Ryder Cup rain gear is always terrific entertainment. But as temperatures started in the 30s on Monday morning in Houston, we got some serious variety from the contenders.

If you need anything to block out the negativity of the work week, we’d suggest a pair of Yealimi Noh’s earmuffs. The good news? Monday’s already over.