Who is Hinako Shibuno? 5 things to know about ‘Smiling Cinderella’ 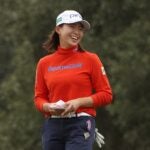 Hinako Shibuno is contending at the 2020 U.S. Women's Open.

As the 2020 U.S. Women’s Open stretches on to Monday in Houston, a whole new set of golf fans are getting to know Hinako Shibuno, the 54-hole leader. Here are five things you should know about the rising Japanese star.

1. Shibuno is a star in Japan.

While she may be a relative newcomer to U.S. golf circles, Shibuno is extremely popular in her native Japan. She won four times on the LPGA of Japan in 2019, establishing herself among the nation’s best players — along with the likes of Nasa Hataoka, Ayaka Furue and Ai Suzuki.

How famous is Shibuno? Well, she’s got a half-million Instagram followers and endorsement deals with Ping, Oakley, Japanese clothing brand Beams and whiskey company Suntory, among others.

“Once I became a celebrity, and celebrity status, it made me difficult to be myself,” she said at the U.S. Women’s Open through an interpreter. “So just recently I was able to get rid of my shell, so to speak, so that I could be myself again.”

2. She made a ridiculous LPGA debut

It’s easy for 2019 to feel like a decade ago, but it was just last summer that Shibuno played her very first tournament outside Japan when she traveled to the AIG Women’s Open. She made her first-ever LPGA Tour start in a major championship and went on to win that very championship, shooting 18 under for a one-shot victory over Lizette Salas. During her run at the 2019 British Open, Shibuno’s warm, unassuming smile earned her the nickname “Smiling Cinderella.” Golfers can tend to be unscrutable, but not Shibuno — she beamed her way to victory.

4. She’s got a baseball background

If it looks like Shibuno has a particularly athletic golf game, that makes sense. She was born into a family of track-and-field athletes — her father threw the discus and her mother threw the javelin. But Shibuno herself got particularly into softball and baseball growing up, joining her junior high’s program as the only girl on the team (and hitting left-handed, too!).

Shibuno played golf from an early age as well, though, taking up the game at 8 at Pal Green Golf Club in Okayama. Recognizing her bright future, she committed fully to golf as a teenager, although she never lost the softball technique (see above!).

It would be easy to say that Shibuno’s win at the AIG Women’s Open was the beginning of a terrific run of golf, but that’s a bit too simple. While she did continue a strong run of form the rest of 2019, winning twice more on the JLPGA, the success hasn’t translated into her subsequent major starts: She finished T51 at the ANA Inspiration, T58 at the Women’s PGA and missed the cut in her title defense at the AIG Women’s Open.

Until now, of course. Shibuno held the 54-hole lead at the 2020 U.S. Women’s Open, showing off a game that made it clear she’ll be around the game for a long time to come.