U.S. Women’s Open live coverage: How to watch, streaming, TV channel for Round 4 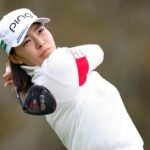 Hinako Shibuno watches a tee shot during the third round of the U.S. Women's Open.

The final major of a pro golf season unlike any other will finish on a Monday. The fourth round of the 75th U.S. Women’s Open was suspended on Sunday after inclement weather hit Champions Golf Club in Houston, Texas.

The USGA said .73 inches of rain fell on the course in a 24-hour span that began on Saturday. Play started and was then suspended momentarily before it was later called for the day. Eighteen players never teed off to begin their final rounds, so there’s plenty of golf left to be played on Monday. This time, with slightly better conditions.

“We want to ensure course conditions are worthy of crowning a major champion,” said John Bodenhamer, the USGA’s senior managing director of championships.

The final round begins at 9 a.m. ET on Monday on Golf Channel, although Golf Channel’s Morning Drive will have pre-tournament coverage beginning at 8 a.m. The broadcast is scheduled to finish around 3 p.m. ET. Streaming the final round is also available on GolfChannel.com with a cable subscription.