How players are coping with an unexpected Monday finish at the U.S. Women’s Open 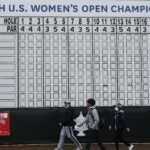 HOUSTON — Hinako Shibuno will sleep on her U.S. Women’s Open lead for another night — and that’s just fine by her.

With a slew of thunderstorms rolling through the Houston area throughout the day on Sunday, the USGA made the decision to suspend play for the day, setting the stage for a Monday finish — a first for the championship since 2011.

“I expected that we weren’t going to play today,” Shibuno told GOLF.com through an interpreter. “I’m not disappointed about it. I’m going to play with new emotion tomorrow.”

When play was suspended at 9:10 a.m. local time, Shibuno was still in the midst of her warmup routine in preparation to chase the U.S. Women’s Open title. But even with Shibuno having more time to think about the lead she has built in her first appearance in the championship, she insisted nerves will not be a factor.

“I’m not nervous now like I was yesterday,” Shibuno said. “I’ve calmed down a little bit.”

That calm feeling is one shared by some of her competitors as they attempt to chase down Smiling Cinderella. As Shibuno left the course for the day to rest for her run at history tomorrow, Lydia Ko remained at the practice facilities for over an hour sharpening her game.

Ko is searching for her third-career major championship, and her first since 2016 as she sits four shots back at even par. She has struggled over the past several years since that initial rise to stardom, winning just one event since 2016. Recently, she has enlisted the help of GOLF Top 100 Teacher Sean Foley in hopes of returning to prior form.

Kaitlyn Papp will also be in chase mode when play resumes tomorrow morning. The University of Texas senior has been a surprise name on the first page of the leaderboard this week, sitting even with Ko and four shots back of Shibuno with 18 holes to play. If Papp were to win, she would become just the second amateur to win the championship since Catherine Lacoste in 1967.

“I’m relieved that we’re not playing (today), because there would be a ton of mud balls and the course would be playing really long,” Papp said. “It’s just another day to get mentally ready for the final round.”

But even with an unexpected extra day of rest and mental prep for the home stretch, there is little the players can do to prepare for the chilly temperatures expected for tomorrow. Although there is no precipitation in the forecast, temperatures are expected to be in the 40s throughout the day.

“Since we played in Dallas last week, I have all of my cold-weather stuff,” said Cheyenne Knight, one of seven Texans in the field this week. “But I might have to go buy some handwarmers depending on when we start tomorrow.”

As of now, the USGA expects play to resume at 8 a.m. CT. But if this week has taught us anything, it’s to be ready for anything.