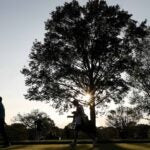 The 120th U.S. Open, the weekend of it, falls on Rosh Hashanah, the start of the Jewish new year.

WHITE PLAINS, N.Y. — Over the years, while typing from this Masters or that U.S. Open, I have trotted out one line probably too often: these are our holy weeks.

I’ve never meant it in anything like a serious way. Golf does come with a lot of ritual. The clothing, the rules, the language, the code. But I would never mistake our game with religion, or a golf course as a house of worship. Please. I do think of a golf course as a sanctuary. That’s why I especially love seaside golf in Scotland, where the game remains windblown and rugged. The less hand-of-man a golf course has, the easier it is to clear your brain and to focus on the important work at hand.

This, from John Updike’s “Farrell’s Caddie,” set in the old country, requires no commentary. On Scottish linksland “energy came up through the turf, as if Farrell’s cleats were making contact with primal spirits beneath the soil, and he felt he could walk forever.”

It just so happens that this 120th U.S. Open, the weekend of it, falls on Rosh Hashanah, the start of the Jewish new year. Rosh is Hebrew for head. Head of the year. Happy 5781, Amy Alcott and Max Homa!

Nervousness shows you care, right? That it matters, that you’re playing for keeps.

One year, during the annual April Tour event at Hilton Head, Easter Sunday and Passover overlapped. I saw Corey Pavin, Jewish to and past his bar mitzvah but Christian for decades now. I asked him if he was accepting dual holiday wishes. “Of course!” he said cheerfully. In 2007, Masters Sunday was Easter Sunday, an overlapping that the winner, Zach Johnson, noted in his first public comments. Masters Sunday is a holy day in a holy week but only with a wink. Easter Sunday comes at the end of Holy Week.

I never expected to wake up in a second-floor room of the Crowne Plaza White Plains on the first morning of Rosh Hashanah, but if this 2020 has taught us anything it’s to expect the unexpected. This is surely the first time the U.S. Open, a June fixture on our calendars, has overlapped with the start of the Jewish new year, an autumnal occasion. Through the magic of internet connectivity, I joined a service this morning. By Saturday afternoon, I’ll be at Winged Foot.

In other words, I’m not going Sandy Koufax on you here. It’s an ancient thing but still told: the great Dodger left-hander did not pitch in the first game of the ’65 World Series, which fell on Yom Kippur, the holiest day of the Jewish year. I never saw Koufax pitch live but I did see him play golf once, at Brad Faxon and Billy Andrade’s charity event in Rhode Island. That was exciting. Very elegant golfer.

Judaism’s so-called High Holiday Season begins with Rosh Hashanah and ends with Yom Kippur, a fast day. Collectively, these days are known as the Holy Days. Also, the Days of Awe. The great symbolic image of this period is that the Book of Life opens with the start of Rosh Hashanah and closes at the end of Yom Kippur. A 10-day period to try to make things right with those you have wronged. This year, Yom Kippur begins right after next week’s Tour event in Puerto Rico wraps up, on that Sunday night.

My daughter and I were with my 92-year-old father on Friday night, for a dinner to mark the start of Rosh Hosh. I asked him what the phrase “days of awe” meant to him. He cited the original Hebrew, yamim noraim. Not really days of awe, in my father’s translation of it, with all due respect to the power of awe. More like nervousness, he said. You can imagine it. If you’re literal about these matters, and the question is who shall live and who shall die — who will be inscribed in the Book of Life and who will not — you can imagine people being nervous.

Nervousness shows you care, right? That it matters, that you’re playing for keeps. Tiger says he’s always nervous, playing in majors, especially at the start and, when he’s contending, at the end. Last year, at the Masters, he played the final hole with a two-shot lead and he needed it. Loose tee shot, loose second shot. He was nervous. We all could see it. We were nervous.

Major golf is awesome and serious and it will turn your nervous system inside out. That’s true on both sides of the gallery ropes. The tension in the Winged Foot locker room, at the 2006 U.S. Open, when Phil was playing 18 on Sunday, was a life force. Everybody in there could feel it. Geoff Ogilvy. The members. The USGA officials. The locker room attendants. Various, sundry others. A small congregation. For those of us who love golf, U.S. Open Sunday is a holy day. No need to use caps. That would be too much.