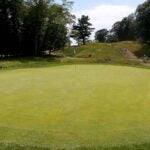 The history will be thick when U.S. Open week arrives in June, but one aspect of next year’s championship will have a completely new look: the routing.

The Country Club, a founding member of the USGA that first opened in 1894, features 27 holes in all across three sets of 9, known as the Clyde, Squirrel and Primrose 9s. The Clyde and Squirrel 9s make up what is traditionally known as the main course, but the USGA has always used a composite routing of their choosing for the 16 championships they’ve held at Brookline, the most recent being the 2013 U.S. Amateur.

The par-3 12th hole on the main course is a short, devilish downhill test with a tricky tabletop green guarded by four bunkers that was recently renovated by famed architect Gil Hanse. For the first time in USGA history, the hole will be included in the routing for the 2022 U.S. Open, playing as the 11th hole that week. The hole can be set up to play as long as 142 yards, or as short as 105, creating a challenge rarely seen by pros at the top levels of the game.

“There’s not enough short holes in golf anymore,” Jeff Hall, championship director for the USGA, said during a media event on Thursday. “It’s a pitching wedge hole, but it still demands execution at a high level. And if you don’t, you will pay the price.”

After accounting for lengthening of some holes and other course tweaks made since the last playing of the U.S. Open at Brookline, the 2022 U.S. Open routing will stretch to an impressive 7,264 yards with a par of 70. The unique routing will ultimately feature 14.5 holes from the Clyde and Squirrel 9s, as well as 3.5 holes from the Primrose 9.

Despite the many changes to the course, golf fans can be sure to expect a familiar experience at one of the most traditional clubs in the country, as the USGA’s Hall noted at the media event.

“It’s fantastic to come back to one of our founding clubs. It’s old school,” Hall said Thursday. “You stand on the first tee at The Country Club and you just look out there and say, ‘This is a U.S. Open golf course.'”