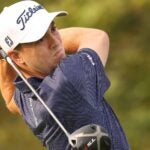 Justin Thomas got off to a hot start on Thursday at the 2020 U.S. Open.

The 2020 U.S Open got off to an exciting start on Thursday at historic Winged Foot, and now the best players in the game will return to try and make the cut at the second major of the year. Here’s everything you need to know to watch the second round.

In general, scores were far lower in the opening round at Winged Foot than most people expected, especially with reports of the terrifyingly thick rough and tricky greens. No score was lower than Justin Thomas’. The World No. 3 and PGA of America Player of the Year went out and shot a five-under 65, the lowest first-round score at Winged Foot in U.S. Open history.

Three players trail Thomas by one stroke heading into Friday’s second round, including Patrick Reed. The 2018 Masters champion made a hole-in-one on his way to a 66 in Round 1. Thomas Pieters and Matthew Wolff later matched him at four under. Four-time major champion Rory McIlroy (67) is also in the hunt after the opening round, while Tiger Woods struggled at the finish to shoot 73, despite a nice birdie run earlier in his round.

Woods and Thomas will get their second rounds started at 1:27 p.m. ET on the 10th tee, and McIlroy tees off at the same time at the 1st. Below you’ll find the complete list of tee times, as well as all the other information you need to watch the second round of the 2020 U.S. Open on TV or stream it online.

TV coverage for the second round of the U.S. Open on Friday will be split between NBC and Golf Channel. Following two hours of streaming coverage on Peacock, Golf Channel will provide six and a half hours of TV coverage from 9:30 a.m.-4 p.m. ET. NBC will follow that with a three-hour broadcast from 4-7 p.m. ET

How to watch U.S. Open Round 2 online

The first two hours of the second round at Winged Foot will be available exclusively on NBCUniversal’s new streaming service, Peacock. This streaming coverage will be offered for free to all viewers, as long as you sign up for a free Peacock account, which you can do here.

In addition, the USGA will provide Featured Group and Featured Hole coverage all day Friday on usopen.com, the U.S. Open app and the U.S. Open streaming app. In addition, you can watch U.S. Open 360, which will include player interviews, live-streams from the practice areas and more. Check out the full second round streaming schedule below.