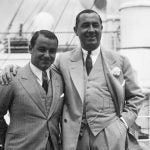 Gene Sarazen and Walter Hagen pose for a photo aboard the RMS Aquitania.

It may seem like the beef amongst members of the United States Ryder Cup team is recent history, born of the modern era. Social media, streamed press conferences, millions of dollars at play — it’s no wonder that there might be some jealousy and irritation amid elite competitors.

But the truth is, drama has followed the Ryder Cup everywhere. Organize the best players in the world into a system they’re not used to and ask them to play for no money, but with implied significance that affects their legacy? Emotions are guaranteed to run hot.

For every modern tale like Patrick Reed slamming Jim Furyk’s decisions in Paris in 2018, there’s a moment in history where a legendary golfer did something just as brash. Actually, even more brash. Take, for instance, the plight of Gene Sarazen.

Sarazen will forever be one of the greatest golfers to ever live, and he knew it. In the spring of 1938, after he had amassed his seven major championships and won the career Grand Slam, he was 36 years old and thinking about everything he had earned within the game. He was short on one goal in particular: a Ryder Cup captaincy.

The Ryder Cup was still in its infancy at the time — it had only been played six times — and Walter Hagen had captained the American team every single time. Great Britain and Ireland had won four of those occasions, and the most recent two Cups. Sarazen, with his 7-2-3 career record in the matches, wanted his time in the lead spot, but he wouldn’t get it.

PGA of America President George Jacobus had kept the status quo in 1937, and even though Hagen was not competing himself, kept Hagen as a non-playing captain and appointed Ed Dudley as the defacto playing captain, despite only competing in two Cups in his career. Without Twitter at his disposal, Sarazen sat down with Paul Mickelson (no relation to Phil, we don’t think) of the Associated Press and vented everything out. The headline on April 6th, 1938 was simple: Never Ryder Cup Captain, Gene Sarazen Quits Team.

To summarize Sarazen’s thoughts would be an injustice, and thankfully Mickelson simply leaned on the spicy quotes for the majority of the article. The dialogue sections go as follows:

“The failure of Jacobus to name me captain of the team is an insult and a wound that will never heal. I think every one will agree my record stacks up favorably enough with that of an other pro, past or present, to have given me one shot at that captaincy. I won every worthwhile championship and I guess I did my share on every Ryder Cup team we ever had. But no, Jacovus didn’t see fit to let me achieve my last and profoundest ambition.

“And so, he can have his Ryder Cup team, I wouldn’t play on another; I wouldn’t accept that captaincy now if it was handed to me on a silver platter as thick as his head.

“What happened last year? PGA politics, that’s it. With Walter Hagen out of competition, I thought surely I would be named captain at last. But Jacobus named his bosom pal, Ed Dudley, playing captain and appointed Hagen as non-playing captain to give me an insult that made me boil inside. I was ready to explode and quit last year when that happened, but I decided to turn it over in my mind. It’s been almost a year since then, and I feel the cut more strongly than ever.

“Perhaps I’ve passed my zenith, but I guess my 1937 record still was as good as anybody’s. Certainly it wa better than Dudley’s and Hagen’s and much better as a working golfer’s than Jacobus’ mark. I am glad I don’t miss as many 2-foot putts on a round as he does chances to do something for the pros.”

Sheesh! Sarazen speaking from the heart there. Since it took some time for news to spread back in the 1930s, we didn’t get an immediate rebuttal from Jacobus. It didn’t spread as quickly as the Twitter replies we saw Wednesday. It took a full day, but it did make the news. Under the headline “Jacobus Denies Charge,” ran a story with this explanation from the PGA President:

“I have known for some time that Sarazen resented not being selected for the Ryder Cup captaincy by the PGA, but he did not tell me personally that it was the reason for his withdrawal.

“As a matter of fact, he insisted he had played in enough international matches, that it was time the younger players got more chance, and that the trips were either too long or tiresome for him.”

That, too was told to the Associated Press.

This was the time of trans-Atlantic trips by ship in order to get the best Americans to Europe for the Cup. Both teams routinely traveled via the RMS Aquitania for a full week before landing in enemy territory. Were these competitions too much for Sarazen, like Jacobus said? It’s hard to be sure. The reason this story is lost from our memories is because there was no 1939 Ryder Cup. There was no 1941 Ryder Cup, or any other Cup held until 1947. World War II kept the Cup from being played for a full decade, extinguishing Sarazen’s fire for captaincy in the loudest way possible.

By the late 40s, when the seventh Ryder Cup was played, Sarazen was still playing competitive golf, but just not on the highest level. Whether he could have made the team in ’47 or not, he kept his word and wasn’t involved.

Brooks and Bryson wish they could hold a grudge that long.