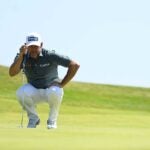 Lee Westwood has placed himself in the kind of rarefied air no player hopes to find.

Another major has come and gone for … everyone but one player in the field. That’s the way it was always going to be, even if it feels like dozens of players could have claimed it at any point.

For Lee Westwood, these facts bring with them an unfortunate record. This Open was his 88th major without a victory. Over the last 26 years, he’s competed in 88 major championships, come painfully close to winning, but never actually gotten the job done.

Westwood has finished in the top 10 19 times and in the top 3 nine times. And for most of those performances, he’s probably been quite happy. So maybe we shouldn’t be surprised that Westwood is in fact very happy to be the new record holder.

He was asked about it earlier this week, before any shots were struck, and he embraced it head on: “I do care about that. That’s nice, that record. It shows I’ve been a good player for a long, long time. There’s not many people who have played in as many major championships as me.”

He’s not wrong. It’s always an accomplishment when any player plays in their 100th career major. We saw Phil Mickelson and Ernie Els do this a couple years ago at the same time. It’s indicative of how many solid seasons pile up, one year after the next, without a serious dip in form. Westwood has been good this entire time, and will likely play in his 100th career major a few years from now. He has been playing some of the best golf of his life this year, after all.

But the record remains!

If he is unable to win a major at some point in his career, he will likely go down as one of the greatest players of all-time to never win a major. Perhaps the greatest player of all-time to never win a major. His biggest competition might be fellow European Colin Montgomerie, who had a wickedly successful European Tour career, but never got it done in the biggest events. Oddly enough, it was the next question in that same press conference where Westwood was asked about holding that distinction as well.

Here was the question, before the asker was cut off: “People put you up there as the best player never to win a major, you have the longest run —“

And Westwood’s response: “Another accolade, yeah. I love it. Thank you.” He also chimed in on Twitter Sunday afternoon.

Fair enough. Here’s hoping he sheds both those distinctions in the coming years.