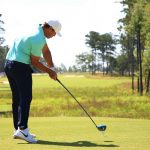 At this week’s U.S. Open at Torrey Pines, who does the journalists and betting analysts like? Or the caddie? Or the old-school gambler? Gimme the facts, storylines and trends. Gimme that inside-the-ropes look. Gimme your gut feeling.

Bet 1: Brooks Koepka, to-win, +1,900. I occasionally fall into the trap of betting storylines. But this one is too lovely — Brooks backs up a month of smack with his fifth major win.

Bet 2: Justin Rose, top 20, +200. He’ll hang around the top of the leaderboard, just as he did at the Masters and the PGA Championship.

Bet 1: Brooks Koepka, top 5, +350. Kopeka has proven time and again that major weeks are where he really shows up. I expect this one to be no different.

Bet 2: Justin Rose, top 10, +400. I really like these odds for Rose, who has two top 8s in the majors this year thus far and is a former champion at Torrey.

Bet 3: Marc Leishman, top 20, +240. Though he doesn’t have a stellar U.S. Open record, Leishman won the Farmers at Torrey last year. Given his comfort and familiarity with the course, I think this could be a breakthrough week for him.

Bet 1: Webb Simpson, top 20, +170. Simpson pops big time when I crunch the stats I figure will apply to this golf course and the U.S. Open set-up. He has great history in this championship, including a win in 2012. He’s also been a force in major championships lately as well as at BIG golf courses like Torrey Pines — eighth at Winged Foot, fifth and 12th recently at Augusta, and top 30 finishes at both Bethpage and Royal Portrush.

Bet 2: Charley Hoffman over Tommy Fleetwood, full tournament head-to-head matchup, -135. Fleetwood often shows up in majors, but his form has not been great as of late. Hoffman is arguably having the best season of his career and grew up on this course, of which he’s played 22 times over the years in the normal January slot for the Farmers Insurance Open. He’s also been a successful U.S. Open player, having missed only one cut in seven tries. He, too, comes off of a top 20 finish at the recent PGA Championship.

Bet 3: Ryan Palmer over Carlos Ortiz, full tournament head-to-head matchup, +125. Ortiz is getting a lot of love this week because he did well back in January at Torrey Pines at the Farmers Insurance Open, despite shooting a final-round 78 to fall off the pace. Palmer, meanwhile, finished second in that same event and, by my numbers, should be the favorite over Ortiz. Palmer also finished second at the Farmers in 2018, with a 13th and a 21st squeezed in between.

Bet 1: Jon Rahm, to-win, +1,050. “Rahmbo” has emerged from isolation and should be fired up considering the negative press he got for the circumstances that led to his W/D at the Memorial. Let us not forget that he had a six-shot lead through 54 holes last time out against a field that had 11 of the top 15 players in the world participating. Rahm returns to the site of his first professional victory, Torrey Pines, where he won the 2017 Farmers Insurance Open.

Bet 3: Max Homa, top 20, +275. Homa returns to his home state, where he always plays well as proven by his victory at Riviera earlier this season. Like Torrey Pines, Riviera has the rare kikuyu grass and poa annua greens. Homa has finishes of 18th and ninth, respectively, on this course.

Bet 1: Jon Rahm, top 5, +250. Solid argument for the best player in his prime without a major. Has motivation after Memorial mishap, a win at Torrey Pines, and three other top 10s in his past five starts. More than a handful of rounds in the 60s on the South Course, which tells me he knows something about the greens. Another guy who has made a meaningful eagle putt down from the back-left corner of the 18th green? Tiger Woods.

Bet 2: Xander Schauffele, top 5, +335. Has played in the U.S. Open four times — fifth, sixth, third and fifth aren’t too bad. Showed his motivation to play well in his home tournament by placing second at Torrey Pines in January. Good bet his previously disclosed favorite taqueria would host the after-party should he hoist the trophy.

Bet 3: Max Homa, top 20, +275. California kid returning home after his West Coast dominance. Owns an 18th and a ninth in his past two starts at Torrey Pines and has never been more confident in his game as evidenced by his T6 at Jack’s two weeks ago. It would be his best finish in a major by a long shot, but a much more fun four-day bet than Bryson DeChambeau to MC Hammer at the same odds with his “bomb ’n gouge” strategy. Good luck.

Bet 1: Will Zalatoris, top 5, +800. When someone shows you who they are, believe them. After watching young Will’s showings in the majors, I believe he’ll be in the mix again.

Bet 2: Brooks Koepka, top American player, +1,200. As if the social media feuding with Bryson weren’t enough to fire him up, this is a major. We know what Koepka does in majors.

Erick Lindgren. Lindgren, the 2008 World Series of Poker Player of the Year,  has won more than $10.5 million in poker tournament earnings and is an avid sports bettor. @EdogPoker

Bet 1: Bryson DeChambeau, to-win, +1,500. Bomb and gouge. Bomb and bouge. What worked at Winged Foot will work at Torrey, too.

Bet 2: Jon Rahm, top 5, +250. A top five won’t make up for the million-plus he missed out on at the Memorial. But it will earn me some nice beer money.