WATCH: Pro tops shot out of rough on opening hole at Bay Hill 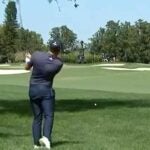 Tyrrell Hatton's 40-yard top was only the tip of the iceberg for a brutally difficult day at Bay Hill.

Things started on the wrong foot Thursday, when the 29-year-old Brit put his chances of making the cut in jeopardy with an opening-round 77. A brilliant Friday 67 steered Bay Hill’s returning champion back to earth, but left him with plenty of work to do over the weekend.

For a moment on Saturday, it seemed Hatton’s opening round was an aberration. He played his final nine holes at five under and entered the final round at a respectable six under for the week, five strokes off the lead. Another solid round on Sunday would place him in prime position for a backdoor top-10, and could even leave him in contention if conditions firmed up further.

Instead, Hatton’s final round at the Arnold Palmer began with a (literal) dud on the very first hole. After pushing his drive left on the 459-yard par-4, Hatton attempted to punch his second shot through the rough and onto the green ahead.

When he made contact, Hatton’s ball didn’t pierce through the air on a trajectory toward its target, and it surely didn’t travel the remaining 181 yards to the pin.

No, Hatton’s ball skipped out of the rough by only a foot or two. After a split second, it caught a tuft of grass up ahead, bounced a few more times and came to rest.

He’d topped it. And worse yet? He still faced a brutal up-and-down to save par just feet from where he’d originally stood.

Ever emotional on the course, Hatton swooshed his club toward the turf in disgust. His ball had traveled a whopping 41 yards.

He would go on to make bogey on the hole, his first of five on the day through only 15 holes.

Ironically enough, Hatton’s performance could leave his overall score flirting with even par for the week — a fitting equilibrium after a week filled with anything but.