How to hit the perfect low stinger, according to a pro 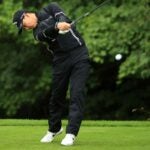 The stinger is a shot that many can admire, but there are few who can hit it effectively.

With a low, penetrating ball flight, there are few shots that inspire awe like the stinger. Tiger Woods made the shot popular in the 2000s, and Gary Woodland has since taken the torch, putting on a show with his low trajectory.

But while the shot is one that many can admire, there are few who can hit it effectively. High-level players have the shot in their bag, but for most recreational players, it remains a shot of their dreams. But the shot is not as difficult as you might think.

Min Woo Lee, a former U.S. Junior Amateur champion who is making his PGA Tour debut this week at Pebble Beach, is among the pros who can hit the shot with ease. And during his preparation for his week at Pebble, he showed the folks with the Tour’s social team how to pull off the stinger.

As a kid from Perth, Australia, Lee knows a thing or two about playing in the wind. Growing up and battling those conditions forced him to learn the low-trajectory shot, and he has since become quite proficient at keeping the ball out of the wind.

The first key for a stinger, Lee says, is to put the ball in the back of your stance. This will help you bottom out on your swing sooner and punch the ball beneath the wind. The next step is to focus on hitting down on the ball.

And while it might seem intuitive to tee the ball as low as possible to hit the ball low, Lee recommends doing the opposite. Tee the ball up a touch higher than normal and you’ll have an easier time making a descending blow and hitting down on it.

“It sounds weird, but I tee it up higher than usual,” he says. “If you want a very low one, you tee it up just a little bit just to hit down on it a bit more.”

If you follow these tips, you will be hitting stingers in no time.