ST. LOUIS — Tommy Fleetwood is running out of Nike irons. In a world where Tour pros can make last-minute tweaks at massive equipment trucks on site, the 27-year-old Englishman is forced into a simpler approach: he only has one set left. So what happens if he breaks a 7-iron this week?

When Nike exited the hard-goods world in 2016, it left its staffers in golf club limbo. While many former Nike players sought new club deals, Fleetwood was among those to stay with his current set, the Nike VR Pro blades. They’ve served him well of late, racking up top-20 finishes including a runner-up result at the U.S. Open. But the world No. 11 knows the irons won’t be around forever.

You may also like One shot shy: Tommy Fleetwood’s historic, heartbreaking final-round 63

“There’s always a sense of, oh, if I change my irons, they might not be as good or might not perform as well,” he said. But that 7-iron scenario? That would be no cause for panic. “It happened in my last set of irons, happened in Mexico, and the hosels on the 7 and the 8-iron bent from wear and tear, so I actually had 12 golf clubs for that week,” he said. “Mid-irons are all right. You can go soft or hard with the ones in between.”

PGA Tour’s Jonathan Wall reported last week that Fleetwood had tried to buy a fresh set of VR Pros that Paul Casey has sitting at home, but he ran into a problem: “They are as rare as rocking horse poo,” Casey told Wall of his remaining Nikes. “And I will not sell them to him. Or put it this way, he hasn’t offered me enough money.”

Fleetwood had a laugh about his exchange with Casey, he said Wednesday. “I saw him on Sunday, and he was like, do you really want those clubs? I think he thought I was joking. But, no, it’s fine, absolutely fine. And I don’t want P.C. on my irons anyway.”

Fleetwood’s golf club limbo at least puts him in good company. Former swooshed-up staffers have done more than okay: Patrick Reed, Brooks Koepka and Francesco Molinari each used to play Nike clubs but have won the year’s first three majors without equipment deals on the books. Fleetwood, who swings a TaylorMade M3 driver, electric-blue Nike Vapor Fly fairway woods and Callaway Mack Daddy wedges, hopes to round out the Grand Slam of former Nike staffers this week. But he acknowledged with a shrug that the clubs won’t be around forever. 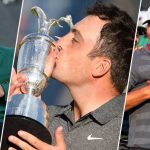 You may also like Free agent Grand Slam? None of this year’s major winners have equipment deals

“Once this set goes, I’ll quite happily change into something else. It’s just that I have the ability at the moment to play with a set of irons that I’ve loved and played with for so long,” he said.