Tiger’s return raises a familiar question: Is the golf world too fixated on him?

LA JOLLA, Calif. — Early Sunday morning, the tide swelled high along the bluffs at Torrey Pines and a sea of people swept toward the 10th hole of the South Course, drawn by one man’s gravitational pull.

It had been like this all week at the tournament-within-a-tournament otherwise known as the 2018 Farmers Insurance Open.

A sporting event was playing out, wrapped around the spectacle of Tiger Woods.

One year removed from his last official PGA Tour start, Woods had returned to triumphal grounds (eight wins here as a professional, including the 2008 U.S. Open) with a new swing, a new mindset and a newly repaired spine but surrounded by the same-old frenzied anticipation.

To read the advance press, it was the biggest comeback story since Lazarus.

And the masses responded to it in kind. From Tiger’s first shot of his first round, a whip-hook with driver that led to an opening bogey, they stood behind him 10-deep in full-throated support. His play was spotty. Their cheers were steady.

“Great shot, Tiger!” they bellowed, whether his ball settled in the short grass or the weeds. It was more often the latter.

Over his first 54 holes, Woods hit just 14 fairways, but he spent those same three rounds painting lipstick on a pig with his wedge and putter. He clawed his way into the weekend, hard on the one-under cutline, then did more makeup work on Saturday to salvage a better-than-it-looked score.

With rounds of 72, 71 and 70 behind him, Woods went out with the dew-sweepers at 8:15 a.m. local on Sunday, the second group dispatched from the 10th tee. At three under, he was eight off the pace set by leader Alex Noren, a long way from the hunt but still the center of attention.

Thick crowds shadowed his every step.

Among those in his gallery was Andre Iguodala, the golf-addicted forward for the Golden State Warriors. It was his birthday. He’d opted to celebrate by watching Tiger, live.

In the run-up to the Farmers, familiar grousing swirled in the Twittersphere that the attention paid to Tiger had gone over the top, diverting the spotlight from other players who deserved it.

Accusations fell on the usual suspects; the media was blamed for fan-flaming the story, and maybe so.

But the energy at Torrey Pines suggested this much: public interest in Tiger is not fake news.

What often looked more manufactured was Tiger’s swing. After a routine par on 10 to start his Sunday, Woods reverted to the two-way miss that had plagued his first three rounds. But his short game bailed him out. An up-and-down for par on the long par-3 11th. A par from the rough on the monster par-4 12th. After a layup from the spinach on the par-5 13th he stuffed a wedge to five feet. But what woulda-coulda-shoulda been a birdie wasn’t. In the middle of Tiger’s backswing, an over-eager fan screamed, “Get in the hole!”

Distracted, Woods twitched his putt — and glared at the gallery.

Popularity has pros and cons. 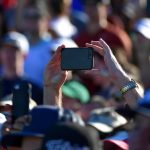 You may also like WATCH: ‘I would beat his ass’: Angry fans, tournament volunteer give mouthy Tiger fan an earful

If Tiger was now hot, he had the wind to cool him, the breezes stiffening as his round wore on. He made the turn in one under, then moved on to a back nine that largely featured more of the same: missed fairways and greens, and a magical short game. He closed with an even-par 72, three-under for the week, seven shots out of a spot in the playoff, in a tie tie 23rd — a better finish than most predicted.

“Today I played a lot better,” he said. “It’s tough conditions out there. It’s tough scoring.”

Asked to grade his performance, he didn’t give a letter.

“Very pleased,” he said. “After not playing for a couple years and coming out here on the Tour, playing a solid four days, I fought hard for these scores. They weren’t like drive down the middle, hit on the green, two putt, one of those yawners. This was a lot of fight.”

Showing a lot of fight is not a first for Tiger. We’ve come to expect it. What to count on in the future is too early to tell. But it’s sure to be the source of fevered speculation.

After an exhausting string of interruptions, all of golf remains caught up in The Tiger Woods Story, with the possible exception of Tiger himself.

Much was made this week that we were seeing a kinder, gentler version of the man who once ruled the game so fiercely, a stop-and-smell the flowers Tiger who chit-chatted with opponents and was playful with the press, who wandered from the 4th tee, mid-competition, to admire the arresting coastal views.

It was a whirlwind of a tournament, the New Woods stirring up the old excitement.

But Tiger seemed to keep things in perspective.

Maybe the rest of us will learn to do the same.