That’s more like it: Tiger Woods makes five birdies in second round of Hero to stay in mix 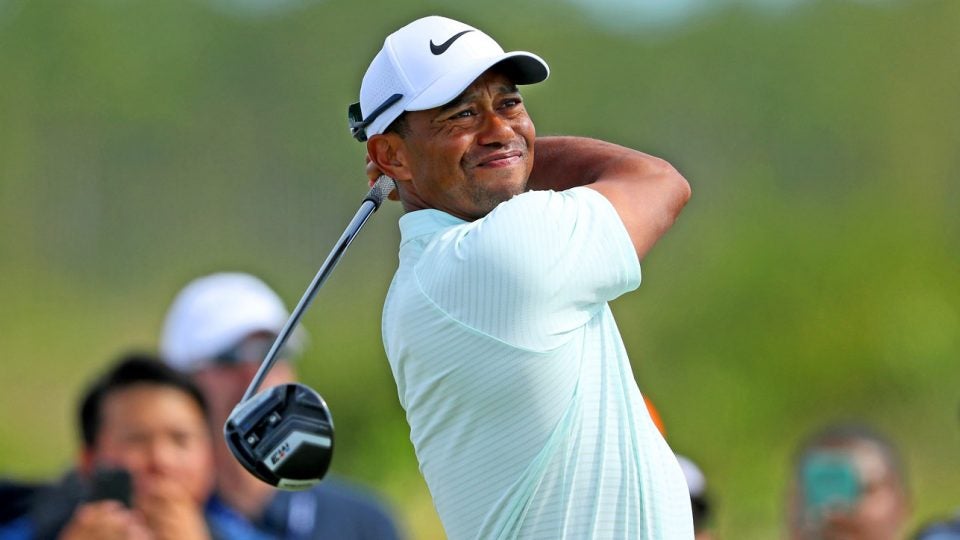 Tiger moved up to No. 14 in the world after ending his five-year win hiatus with a victory at the Tour Championship in September to capture his 80th career PGA Tour win.

After struggling during the first round of the Hero World Challenge at Albany Golf Club in the Bahamas, Tiger Woods rebounded with a five-birdie second round on Friday to finish with a three-under 69. Woods, who now stands at two under for the tournament, entered the clubhouse seven shots back of the leader Jon Rahm.

After opening the day par-par, Tiger moved into red numbers for the first time in the tournament with a birdie at the par-5 third hole. After going par-par at the fourth and fifth holes, Tiger tallied another birdie at 6 to move to two under for the round and one under for the entire tournament. He closed out the front nine with a third birdie on the ninth hole to make the turn at three-under.

Woods began his back nine with four straight pars to remain at three under. While it might not have been what he was looking for after the turn, it was better than how Thursday went for Tiger. After his first round got crushed to pieces following his triple bogey at the 12th hole, Tiger’s tee shot was able to find the green at 12 on Friday.

But after his four straight pars, Woods notched back-to-back birdies on 14 and 15 to move to five-under for the day and four-under for the tournament. 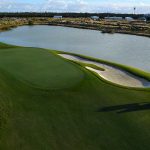 You may also like 3 things to know about Albany, the home of the Hero World Challenge

After 17 holes, it looked as if Tiger was going to have a bogey-free round. But the par-4 18th hole had other plans, where he had to hit his second shot, which came to rest under a bush, from his knees. That led to a double bogey.

While Tiger’s driving continued to be impressive, his short game showed progress from Thursday’s first round. Still, there’s room to improve as Woods left several birdies on the green today.

For the full play-by-play of every shot from Tiger’s second round, check out below:

(ALL TIMES ET / REFRESH THIS PAGE FOR THE LATEST UPDATES)

Full Round 2 Scores / Get to know host course Albany

2:51: Tiger’s 20-foot putt for bogey misses and rolls a good four feet passed the hole. But he successfully sinks the comebacker to avoid his second triple of the tournament. It’s still a double bogey though, which gives him a final score of 69 for the second round and drops him into a tie for 14th at -2.

2:49: Yikes, Tiger is struggling here at the end of his round. He hits another poor chip with his fourth shot on 18, and it comes up very, very short. He’s got a longish putt just to make bogey.

2:45: Tiger launches an iron towards the green 215 yards away, but it doesn’t make it there, sticking just in front of the putting surface, a good 100 feet from the pin.

2:44: With his ball under a bush on 18, Tiger gets on one knee and does a short, sideways punch shot, successfully getting his ball into a playable place in the rough. Now he’s got a long way to the green for his third shot.

2:39: Oof, Tiger’s ball is indeed stuck up under some kind of shrub on 18. They’re waiting for a rules official to arrive and give them a ruling.

2:36: With water running down the entire left side of the 18th hole, Tiger chooses to hit a wood instead of his driver. The water may have spooked him because his shot goes right into a sandy area. There are a bunch of shrubs in there, so he could be in trouble.

2:33: Tiger hits a nifty little chip at 17 that nearly goes in, coming up just a couple of inches short. He taps in to save par and move to the final hole of the day.

2:27: Tiger’s tee shot misses the green at the par-3 17th. He’s really struggling with the par-3s today, unable to hit the green in 1. It’s strange because he’s been so accurate with his driver.

2:12: Tiger sticks with the big stick for his tee shot at 16. He hit the fairway, but his ball rolled just far enough to reach the rough. He should be fine from there.

2:08: Tiger makes a nice two-putt at 15 for his second-straight birdie. Now he’s -4 for the tournament, just four shots back of the lead.

1:56: BIRDIE! Tiger sinks his short putt at 14 to move to -4 on the day, and -3 for the tournament. He’s now just five shots behind leader Patrick Cantlay.

1:47: Tiger pulls driver on 14 tee, and he smashes another one down the middle of the fairway, nearly reaching the green on the short par-4. He’s been driving the ball great all day.

1:45: It’s good. Tiger rolls the three-footer into the center of the cup for another par. He remains at -2 for the tournament.

1:40: Tiger knocks his drive at the par-4 13th ends up in the middle of the fairway. From there he hits a 144-yard wedge and sticks it to 12 feet. He’ll have another good look at birdie there.

1:34: Another birdie putt for Tiger comes up short. He settles for par on 12. Maybe not the result he wanted, but not a disaster like yesterday.

1:29: Unlike on Thursday, Tiger’s tee shot finds its way to the green, and he’s in good position for another birdie putt. Probably no triple bogeys here.

1:26: Tiger misses another birdie putt and settles for par. That’s one he’s going to want back. We’re now off to the par 3 12th hole, which blew up his first round on Thursday.

1:19: Tiger’s second shot gets him close to the green. His third shot is a wedge and is now in another great spot for a birdie. Let’s see how his putting goes here as he’s only a few feet away from the cup.

1:06: Tiger’s second shot gets him on the green, but it’s going to be a long birdie putt here. He wasn’t happy about it based on his facial reaction.

12:59: Tiger closes out the front nine with another birdie, his third of the day. He’s now 3-under for the day, and 2-under for the tournament. Strong first nine holes today for Tiger as he makes the turn.

12:56: After his second shot finds a bunker, Tiger gets himself onto the green and within a few feet of the cup. Let’s see if he can get a birdie.

12:46: Another hole, another great drive from Tiger at the par 5 ninth tee. An opportunity for him to close out his front nine on a high note.

12:43: Tiger misses a short putt and a great chance to birdie at 8. He’ll have to settle for par. Putting struggles beginning to reemerge.

12:39: Tiger continues to drive the ball well today as his tee shot at the par 3 eighth hole finds the green. Another great opportunity for birdie awaits.

12:35: Tiger’s birdie just rolls past the edge of the cup. He settles for par and remains at 2-under for the day as he heads to the eighth tee.

12:32: Tiger’s second shot is a chip shot, and it gets him onto the green. He’s in close proximity to the hole and has a shot at another birdie.

12:23: Tiger is now two under for the day. He’s putting better and needs to avoid errors or mistakes if he wants to get back into contention.

12:20: And he wedges it in there close…and knocks it in. That’s a birdie, his second of the day. And he’s one under for the event.

12:06: Tee shot on the par 3 is another laser, but he missed the putt. Another par. Still even for the tournament as he moves to the 6th.

11:57: On 4 Woods find the fairway, but he misses the green with his approach. Getting breezy out there. He’ll try to get up-and-down to save par.

11:50: The eagle putt misses, but it’s an easy two-putt birdie. Woods is back to even par for the tournament.

11:42: He drives it down the fairway and will take a run at the flag with a three-wood…let’s see what happens.

11:29: Woods bumps it tight and taps for a par on the opening hole. Still +1, with the rest of the field teeing off over the next 90 minutes.

11:22: Woods’s opened tee shot is yanked left into a sandy waste area. Second shot comes up short of the green. And we’re off and running.

11:15: Today the field tees off in reverse order of the standing, so Tiger, one shot out of last place, is in the first tee time of the day and paired with Hideki. Time to make some birdies!