Tiger Woods opened his 2019 season Thursday at the Farmers Insurance Open at Torrey Pines. Given that it was his first competitive round of the new year, it was the first time the 14-time major champion teed up with the new rules changes in effect. It also marked the first time he could putt with the pin in.

Many golf fans were eager for the strange sight of Woods putting without removing the flagstick, and they only had to wait a few holes into his round to get their wish.

On the par-3 8th hole at Torrey Pines’s South Course, it happened. Woods hit his tee shot safely on the green, but a full 15 yards from the hole. Given the length of the putt, he opted to keep the flagstick in for the first time in his Tour career.  You can see a screenshot of the moment here:

Unfortunately for Tiger, his birdie putt missed, but the flagstick wasn’t to blame. Tiger’s putt tailed off wide left, avoiding contact with the cup entirely, though he successfully saved par to remain at even for the day.

Woods had this to say about the putt after his round: “Part of me wanted to have (caddie) Joey (LaCava) down there to tend the flag, because I just felt like I might be slapped two (strokes) if this putt happened to go in. So that part, I’m trying to get over that. I’m trying to get used to it. But we’ll see.”

Woods previously admitted that he’d experimented with the new rule at home and planned on leaving the pin in on certain occasions. During his press conference on Tuesday, Woods said, “Some of the longer putts [I’ll keep it in]… I have been experimenting trying to hit putts downhill at home and see how that feels.” 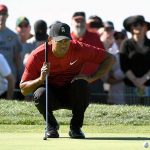 His putt on Thursday was downhill and lengthy, so it makes sense that he chose to try it on that shot.

While this is the first instance of Tiger experimenting with the new rule in competition, other pros have been doing so for weeks. Bryson DeChambeau recently claimed that keeping the pin in is scientifically proven to help in 99% of situations.

Now that we’ve all seen Tiger putt with the pin in on Tour, we can start looking forward to an even stranger sight: Tiger putting with the pin in at Augusta National during the Masters. It may sound far-fetched, but Woods has already implied that he’s thinking about it, saying earlier: “It might be more advantageous when we get on faster greens with a little more slope, i.e. Augusta.”