Tiger Woods has watched from home as pro golfers have dealt with the new rules as the calendar turned to 2019.

But he’s been practicing on his own, too.

“I’ve done one knee-high drop at home,” Woods said on Tuesday, ahead of his first start of the season at the Farmers Insurance Open at Torrey Pines. “Hit the ball in the hazard on 18 at Medalist, and did it and it felt really weird, but I understand that’s just the way it’s going to be.”

The new knee-high drop and putting with the flagstick in have been the main changes to the new rules, and they’ve generated the most discussion, too. The hot topic for Tour players is if, or how often, they plan to keep the flagstick in. This all stemmed from Bryson DeChambeau saying months ago that he plans to do it all the time. 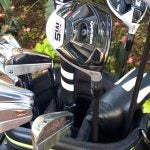 You may also like It’s official: Tiger Woods has new TaylorMade irons, driver in his bag for 2019

Woods said he’s practiced with the flagstick in at home and will keep it in at certain times.

“Some of the longer putts [I’ll keep it in],” he said. “I like having [caddie] Joey [LaCava] there as a reference point, so the flag will be there. He’ll obviously have to take it out. Some of those putts where the hole is kind of visible as it comes up over a rise, I can see it, but it will be nice to have a reference point, so I’ll probably leave it in for those kinds of putts. I have been experimenting trying to hit putts downhill at home and see how that feels. I didn’t find that I hit better putts. It just felt that I could hit it more aggressively, which I did, then I started running it eight, nine feet by. I understand why some of the guys are doing it. It might be more advantageous when we get on faster greens with a little more slope, i.e. Augusta. Having that sense of security on a three-, four-footer down the hill you can just kind of take a cut at it.”

This is Woods’s third straight year starting his season at Torrey Pines. Two years ago he missed the cut and then had fusion back surgery, ending his season. Last year he tied for 23rd, which was the springboard to a successful comeback season.

This week marks his first competitive start since he won the Tour Championship in September. Since then he’s played in the Ryder Cup, faced off against Phil Mickelson in The Match and hosted his own unofficial event, the Hero World Challenge in the Bahamas.

“Way different [this year],” Woods said. “I know what my body can and cannot do. It was like trying to hit a moving target last year and it was quite interesting to try and figure it all out as the year progressed and evolved. This year I have a great understanding of what I can and cannot do.”

Woods’s first round at the Farmers is at 1:40 p.m. ET on the South course on Thursday. He’s grouped with Xander Schauffele and Tony Finau.