Team events like the Ryder Cup often bring out the human, and humorous, side of typically staid PGA Tour pros. That was certainly the case Sunday night, when Tiger Woods was greeted by a room full of cold shoulders after his East Lake victory.

While waiting for Woods to finish his media responsibilities after the Tour Championship, U.S. Ryder Cup captain Jim Furyk devised a prank involving the whole team. He wanted the team to greet the 80-time Tour winner by taking a cue from baseball. Tiger’s caddie, Joe LaCava, was alerted about the prank before it went down, as he told Ryder Cup Radio on Siruius/XM in an interview. 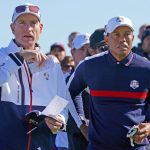 “I ran into Jim Furyk and he said, ‘We were thinking about giving Tiger the cold shoulder like they do in baseball when the guy hits his first home run.’ He asked, ‘Do you think Tiger will be OK with that? I was like, ‘Of course he would. He’s got a sense of humor.'”

So how did it all go down in the end? LaCava has the details on that, too. 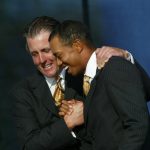 You may also like All 11 of Tiger Woods’s Ryder Cup partnerships, ranked from best to worst

After about two minutes of ignoring the man many of them grew up idolizing, the team finally broke character and congratulated the 42-year-old champion.

It’s hard to imagine a Ryder Cup team pulling this type of prank on Woods back in the early 2000s, but as we’ve all seen, this is a new Tiger. You can expect more hijinks throughout the week because nothing is better for team bonding. And nothing is more important to winning the Ryder Cup than having a team that’s close and willing to fight for each other.