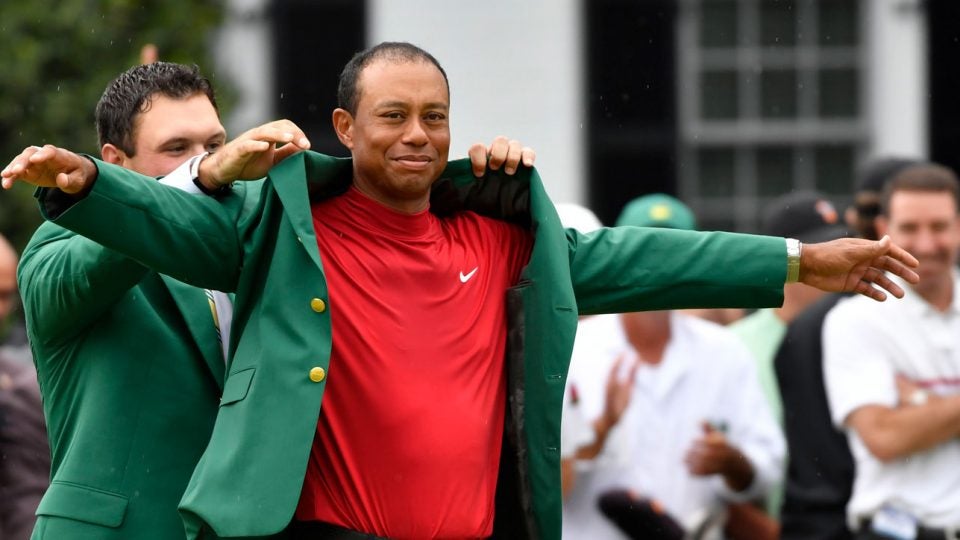 When Jack won in ’86 did people know it was a farewell? Or did they think he was ‘back’? -@NaaderBajwa

I still remember a big SI feature on Nicklaus that came out a month or so after that Masters in which he talked about a renewed desire and focus. That carried him to a tie for 8th at the ensuing U.S. Open, and he made some noise at the ’87 Masters (T7), but he never won again. It was a different era, in which few players were relevant after 40, and prior to the ’86 Masters, Big Jack had been in decline for years, having won only once since 1982, and contended only one time (barely) in the preceding eight majors. So despite the great man’s optimism, I think most fans understood they had witnessed a glorious farewell.

Tiger is in an entirely different position – he easily could have won the final two majors of 2018, and he closed the season with a victory at the Tour Championship. His game is a lot more ascendant than Nicklaus’ was at the time of their respective Masters renaissances. But the cruel thing about golf is that you never know when you’ve just enjoyed your last victory.

Should there be a week off after each major? I tried getting into the Heritage this weekend and just couldn’t live under par. -@JimmyLobus

I’m sure Francesco Molinari would agree – he looked like a dead man walking en route to his missed cut at Harbour Town. I agree with your general thesis, but Hilton Head is the one exception. It’s where the golf world goes to sleep off the Masters. It’s an easy drive from Augusta and such a fun, chill spot to aid in the recuperation. Folks are still buzzing from the excitement of the Masters. But clearly it can be hard for some (many?) of the players to summon the proper intensity. Apparently that applies to fans, too.

Is Harbour Town the true masterpiece of Pete Dye’s amazing course design? Or do you prefer Sawgrass? -@FelixHa

Teeth of the Dog.

I totally dig Dustin Johnson and his game. I think he has been the best player since Tiger’s issues began. I also think he has the most physical talent on Tour at the moment. All that being said, if he doesn’t win 2 or 3 more majors, is he a disappointment? -@JSwinging

Massively! Talent is hard to quantify but wins and losses are not. Dustin began this decade with a signature collapse, his Sunday 82 at the 2010 U.S. Open to blow a three-stroke lead. Since then he has 15 more top-10s in the majors, only one of them a win. En route to this Furykesque ratio he has kicked away major championships in all manner of slapstick fashion.

DJ’s Sunday self-immolations are not limited to the majors. Per Justin Ray, the Heritage was the third time Johnson has shot 77 or worse in the final round of a PGA Tour event in which he held the 54-hole lead. In the last 15 years, no other player has done that more than once. Dustin is so good he can’t help but pile up victories but all the tournaments that have gotten away are also a big part of his legacy.

What’s going on with Jordan Speith? Are you a Stout drinker? What do you think are the best new irons? Have you played at Bandon Resort? Your favorite course at Bandon? Do you walk & carry? -@RLMgrandpa

He’s in a slump. Not really. Cobra single-length.Yes. McLay Kidd’s Bandon Dunes. Usually, but I’m also lazy and can be persuaded to ride in a cart. 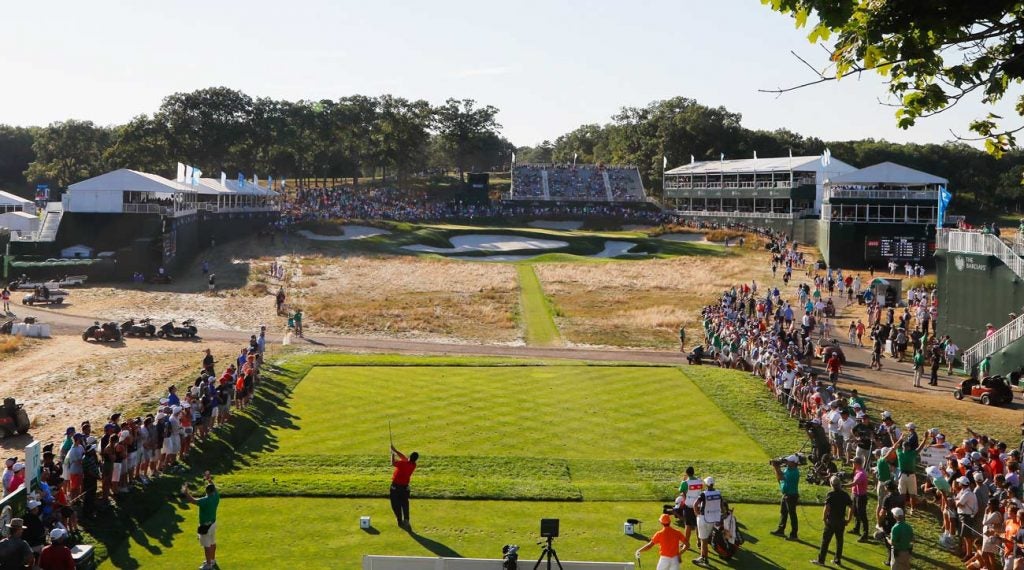 Bethpage Black last hosted the 2016 Barclays tournament. The PGA Championship heads there this May.
Getty Images

Will the PGA Championship grow in stature by becoming the second major of the season? Or will the new position on the schedule hurt it? -@SamDosty_5

Why did the golf world go crazy for Arnold Palmer’s U.S. Open victory in 1960? Jack Nicklaus’s in ’72? Tiger Woods in ’02? Jordan Spieth in ’15? Because they had also won that year’s Masters and thus were halfway to the Grand Slam. By moving up to second in the batting order, the PGA has stolen this glory. Tiger will bring all this mojo to Bethpage, and then some. The Masters is always so exciting there is a strong residual benefit to being the next major, four weeks later. In the old days, the PGA was supposed to be glory’s last shot, but really the golf world was slightly apathetic by the time it rolled around. The August heat also meant the host venue’s greens had to be kept wet and soft, so the PGA usually played more like an everyday Tour event than a major championship. This will be much less of an issue in May. So, all in all, the date change is a homerun for the PGA Championship.

A major in May is all wrong. Throws everything off. It’s like a strike-shortened season. Or like Bonanza on color TV in “Diner,” looks fake. -@MarVistaPete

Nah, the month after the Masters used to be the dregs of the schedule…and then we had to wait another month to get to the U.S. Open. I’m loving the cadence of the new schedule.

How many wins for Brooke Henderson in total? Will she ever be a World number 1? -@TonyWurtzSK

Lifetime? Given that she has now won eight times by the age of 21 there’s no reason BH can’t win a couple dozen tournaments, which would put her in the top-25 on the all-time list. But there are contemporary cautionary tales like Yani Tseng and Lydia Ko to remind us that life can get in the way and derail the career of even the surest of Sure Things. Henderson is a fearless, overpowering player but she also burns very hot – I’ve seen her in tears at a couple tournaments that didn’t go her way. This passion fuels her game but I do fret she will burn herself out. As Tseng and Ko have discovered, tournament golf is an endless grind and building a Hall of Fame career is more of a marathon than a sprint. I hope Henderson will enjoy a long, fruitful run but that is not a given. 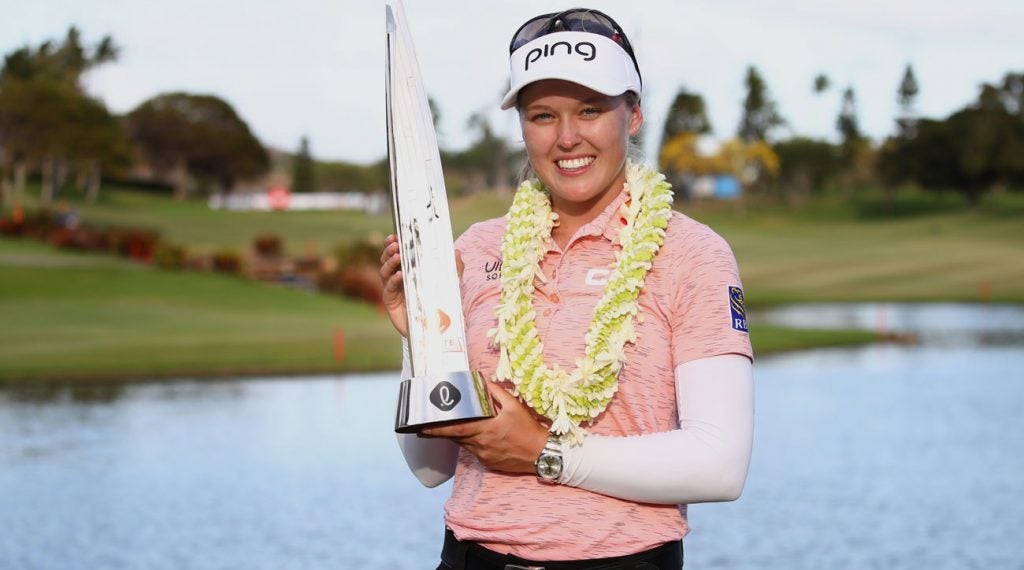 Brooke was so impressive at Ko Olina. At 280 off the tee, could she compete at Harbour Town, Colonial or Waialea? -@GolfInPebble

That would make her the shortest player in the field, which is obviously a big disadvantage on the par-5s and long par-4s but also on 220-yard par-3s. If Brooke played her absolute best she might be able to make the cut, which would be a tremendous accomplishment. I’d love to see her try.

How long before people start calling to include the U.S. Amateur in the “major” category again? It would put Tiger one win closer to Jack Nicklaus. (And Jack still counts his Amateur wins as majors on his own website). -Mike (@ScratchInMirror)

I’m sure he does! But the rest of us moved on long ago. Jack grew up idolizing Bobby Jones; in his heyday he turned the U.S. Amateur into one of the game’s most important championships. But Hogan-Nelson-Snead made the pro game more relevant and then Arnie and Nicklaus himself took it to new heights. I love the Amateur but it’s going on 90 years since it could claim to be a major championship.

I got Woods winning at Bethpage. You too? -@JoeGunter

Yo, Ryan, this column is called Ask Alan, not Ask Alan And Then Answer Your Own Damn Question. But I agree with what you’ve said here, especially the last point. Everyone knows I’m a big advocate for public golf, and a serious problem for New York is that among its best dozen or so courses only Bethpage is able to be enjoyed by the public. California offers gold standards Pebble, Pasatiempo, and Spyglass Hill, a U.S. Open track in Torrey Pines, another major championship venue in Harding Park and sundry others. Turns out the Cali vs. New York debate is not even close.

If they made a movie about TW right now, who would you pick to play him? -@RichWojo

Michael B. Jordan. With Tim O’Neal serving as the on-course body double.

With Tiger now off the board here, who in your view is the most likely player to win another major that hasn’t won one in at least 10 years? -@Cstiles24

Alternate universe in a post-Freddie Couples Hall of Famer world: Tiger retires tomorrow. His post-scandal career, on its own, is it good enough for the Hall? 10 wins, 1 Masters, 1 PGA runner up, 9 top 10s in majors (out of 25 played). -@ShawnFury

And additional bonus points for a player of the year award and spending more than a calendar year at number one. It’s certainly a better resume than Couples’ and arguably superior to recent inductees like Colin Montgomerie and Retief Goosen, so I guess we have to say yes. Which is absolutely wild.

My brother (not a golfer) and I were discussing golf terms and I told him that we take the word “the” out before driver. Example: “I hit driver on four” not “I hit the driver on four.” He started making fun of us golfers. It’s common usage, but is there a grammatical reason? -@RocksBarrington

The only explanation is that it sounds cooler. Just like we drop the ‘a’ before bogey and birdie: “I made birdie on the third hole.” Same with the ironclad rule that ‘golf’ is only used as a noun, not a verb. It is what it is. Anyone who argues to the contrary is not a real golfer.