Dustin Johnson entered the final round at the RBC Heritage with a one-shot lead. In golf, nothing is ever certain, but most fans assumed that Johnson would at least contend for the win on Sunday.

That wasn’t the case. On Sunday, Johnson was one-under through 6 and birdied 18. On the 11 holes in between he was a shocking eight over and fell from the lead to T28 by day’s end (C.T. Pan went on to win). Just how rough was Sunday’s round? Here are some numbers to help put it into context.

10 — Additional number of shots D.J. took on holes 11-15 Sunday versus Saturday. On Saturday, Johnson went par-par-birdie-birdie-birdie on the five-hole stretch. Sunday was a disaster on those same holes: bogey-bogey-bogey-double-double. No coincidence that he shot 68 on Saturday and 77 on Sunday.

1 — Number of players in the field that Johnson beat on Sunday. Satoshi Kodaira had a rough one, finishing with an 11-over 82. Johnson and four others (Cody Gribble, Mackenzie Hughes, Nick Taylor and Charley Hoffman) shot 77. 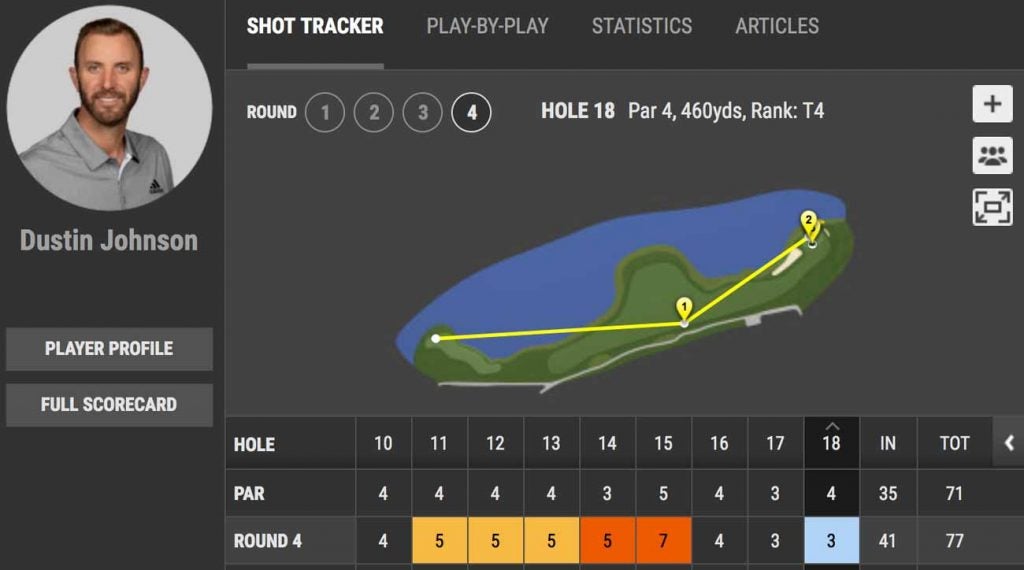 1 — Johnson’s weekly rank in strokes gained off the tee. Despite losing 1.49 shots to the field on Sunday, his mighty tee ball had been so ridiculously good the first three days that he still gained 4.68 shots off the tee, better than any other competitor. Our Jonathan Wall notes in this week’s equipment roundup that Johnson has been gaming a new driver shaft.

3 — Times Johnson has shot 77 or higher when holding the 54-hole lead. No other PGA Tour player has accomplished that feat more than once in the last 15 years, per Justin Ray. Johnson also stumbled at the 2010 U.S. Open at Pebble Beach and lost a big lead at the 2017 WGC-HSBC Champions.

News
How hard is sleeping on the lead? We broke down the 2016-17 Tour season to find out

5 — Stroke-play events in a row that Johnson had cracked the top 10. A bit strange to break that streak when you’re holding the Sunday lead — but Sunday was a strange day for Dustin Johnson.