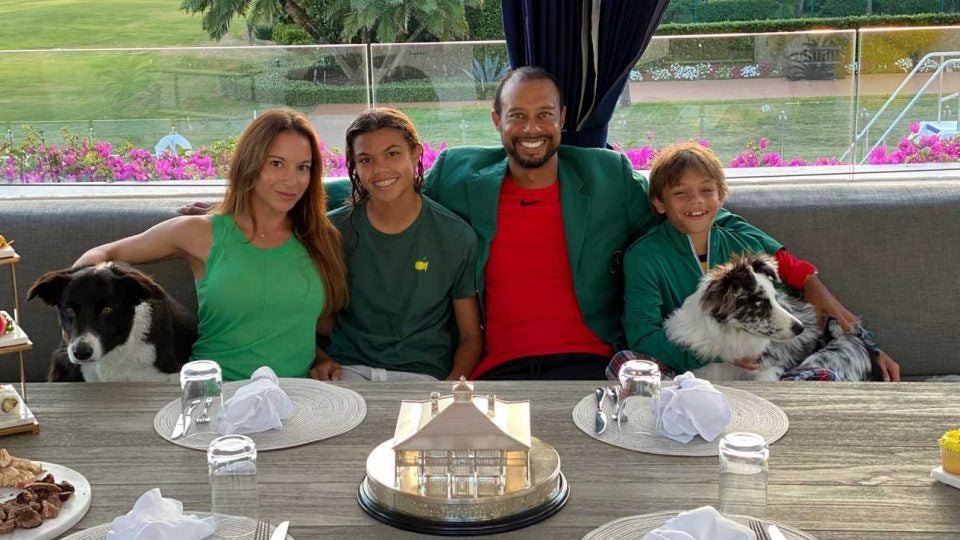 Tiger Woods and family celebrate his Masters win at home in Florida.

The postponement of the 2020 Masters robbed us of a chance to see Tiger Woods defend his title this week at Augusta National. It also means Tiger will have to wait until at least the fall to serve his fifth Masters Champions Dinner. Or so we thought.

It turns out that Woods found a way to celebrate the Champions Dinner at home.

On Tuesday night of this “Masters” week, the traditional night the dinner is held, Woods posted a photo on Twitter of his version of an alternative Champions dinner. In the photo, Woods is draped in his Masters green jacket, but everything else is different than the typical Champions Dinner scene.

Instead of the iconic Augusta National clubhouse, Woods is dining on the porch of his Jupiter Island home. And in keeping with proper quarantine rules, instead of being surrounded by dozens of former Masters champions, Tiger is flanked by his two kids Sam and Charlie, his girlfriend Erica Herman — all dressed in Masters green — and his two dogs.

Masters Champions Dinner quarantine style. Nothing better than being with family. pic.twitter.com/xPK769CWCf

While it might look like Tiger and family are out at a golf club forgoing stay-at-home guidelines for their dinner, that’s actually Tiger’s home. The golf green you see in the background is not from a course, it’s just Tiger’s insane backyard practice facility.

Tournaments
The Masters That Never Was, Part III: A scare at the Champions Dinner, and Phil being Phil

Each year at the real Masters Champions Dinner, the reigning champion gets to pick the menu, and before the coronavirus pandemic hit, Woods planned to treat his fellow Masters champs to steak and chicken fajitas plus sushi and sashimi.

And one additional treat for dessert.

Tournaments
What is would-be Masters week like in Augusta with no Masters? We found out

“I’m debating whether or not to have milkshakes for dessert,” Woods said in February, speaking to the 2020 menu. An all-time favorite memory of his, he said, was watching Gene Sarazen and Sam Snead sip milkshakes on the porch at Augusta National’s clubhouse.

He didn’t reveal if he stuck to that menu on Tuesday night, but it might not matter. With the 2020 Masters now tentatively rescheduled for the week of November 9, Tiger might get to serve his chosen meal in 2020 after all.