What is would-be Masters week like in Augusta with no Masters? We found out 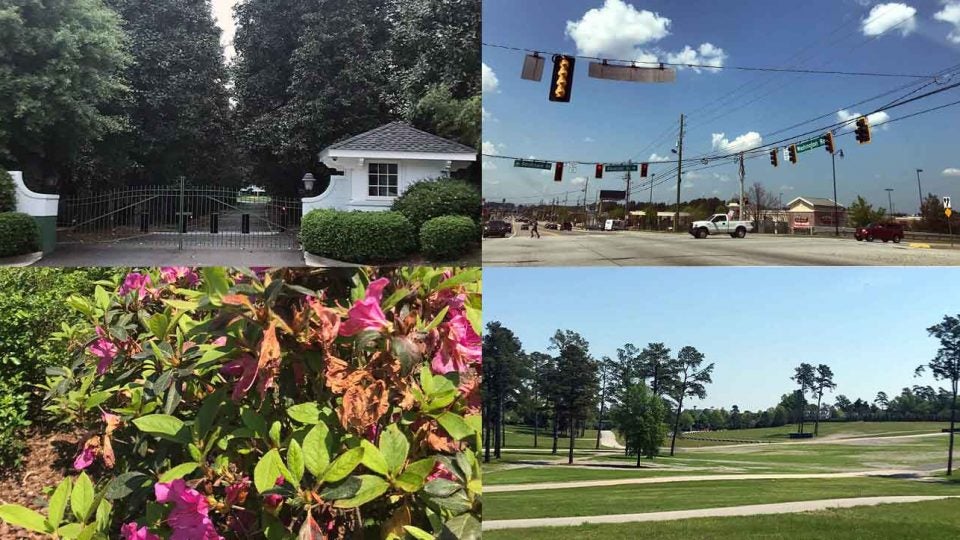 It's eerily quiet this week in Augusta, but locals can now look forward to a November Masters.
David Westin

If locals were sulking, they could take solace in an announcement the club issued just after 11 a.m. The 84th Masters had been rescheduled, with Masters Monday slated for Nov. 9 and the tournament rounds on Nov. 12-15.

Seven months feels like a long time to wait and those dates are better suited for turkey and sweet potatoes than pimento cheese sandwiches, but at least the tournament is back on the 2020 calendar. (The two Augusta National events that are normally held the week before the Masters — the Augusta National Women’s Amateur and the Drive, Chip and Putt National Finals — have been canceled.) 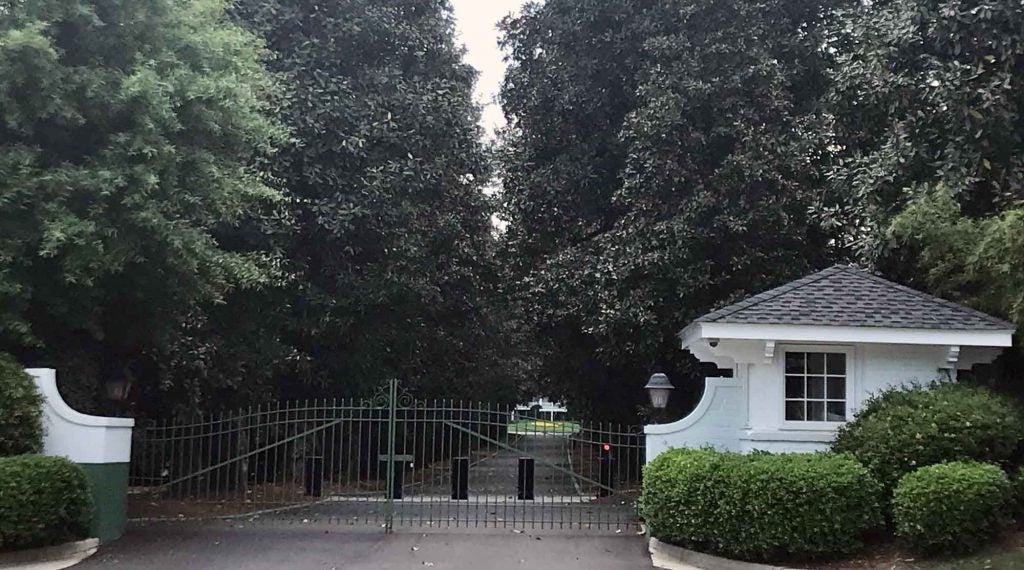 Still, this year marks the first time the Masters hasn’t had a spring date since its inception in 1934, and it was hard for townspeople to block out what should be happening this week, both at Augusta National and across the city.

“There is nothing going on,” Karen English said Monday afternoon. She was walking with friend Kim White on a sidewalk along Berckmans Road, which is the entry point to Augusta National’s parking area and patron entry. They were alone with only the occasional car motoring past them.

After club chairman Fred Ridley announced the postponement of the tournament on March 13, some air went out of Augusta. The famous azaleas around town were blooming early and had no motivation to hang on. There was no rush to finish widening Berckmans Road or the construction of the city’s first Topgolf location. Had the Masters not been shelved, those projects would have been completed by now.

White can hear Berckmans Road from her house and said on Sunday night there was no activity. “Nothing — we never heard a car,” she said. “It was like living out in the country.”

The pleasant weather Monday — cloudy and in the low 80s — made them miss the Masters even more. “Some years it’s freezing cold and to have this weather and not have the tournament …” White said. The forecast for the rest of the week is also made-to-order for golf spectating.

English has parked cars at an off-site lot for the past five years and has become friends with the regular customers. “I was looking forward to seeing the same people,” she said. “To me, the money part, yeah, but I miss seeing those people and developing those relationships. Last year I met the security detail for Mike Pence. I wouldn’t have ever had that experience if it wasn’t here.”

By now, defending champion Tiger Woods and most of the field would have eased off Washington Road and down Magnolia Lane. They would have been preparing, calibrating, schmoozing. Now, the Masters will be the last of the three majors this year (the British Open has been canceled), assuming they’re all played. And talk about a short reign: the 2020 Masters champion will enjoy the title for all of five months before he will have to defend the green jacket beginning April 8, 2021.

Back at the entrance to the club, not only is Magnolia Lane closed, but the Augusta National Golf Club sign to the right of the gate has been removed. That’s how the club signals it’s on hiatus, like so many other businesses in this town of just less than 200,000 people. 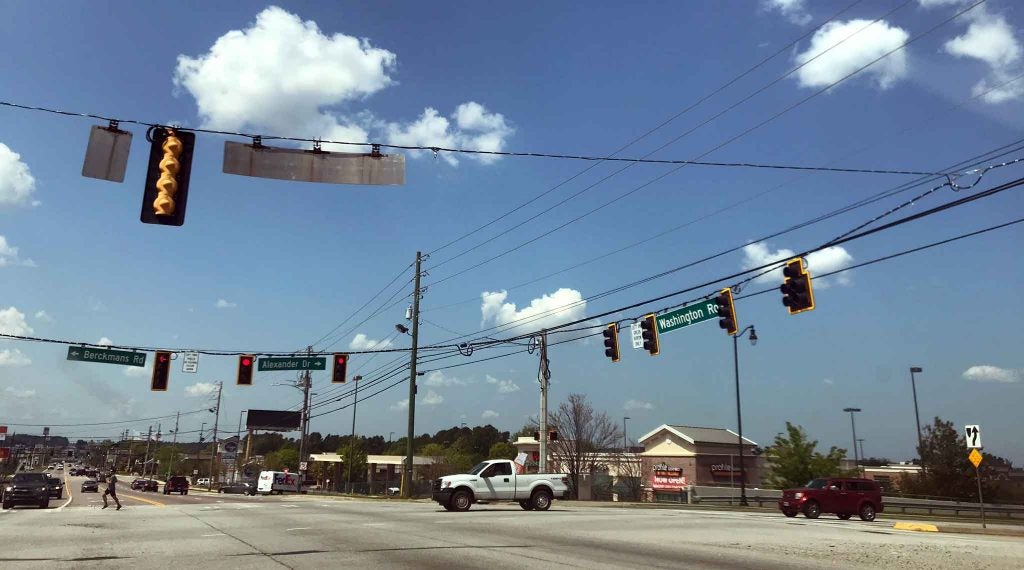 Hooters, less than two miles from Augusta National, is taking only to-go orders. Many other businesses have closed entirely, from Macy’s to the Apple Store to the gentlemen’s club in downtown Augusta, where locals know John Daly spent an evening during his Masters debut in 1992.

Smith would know. He’s a UPS driver and has been zipping around the city with deliveries. He said the volume he’s delivering is “almost like Christmas” but he’s making much better time.

ANGC might be closed even for members now, but that doesn’t mean golf isn’t being played elsewhere in town. Almost all the golf courses are open, after being giving the all-clear from Gov. Kemp, whose order allows the pursuit of “outdoor exercise activities.”

The city enjoys an estimated economic impact of more than $120 million from the Masters. Even though the golf courses are open, they are losing out on a big payday. They typically raise their rates significantly during Masters week and are booked well in advance. Now, they’re serving only their members and walk-ins paying the standard rates.

“It’s going to be quite the hit even though we’re open,” said Dan Elliott, the general manager at Forest Hills Golf Club, a public course with a Donald Ross design that opened in 1928. “You don’t have to be a mathematician to figure that out.”

Added Bill Fowler, a science teacher at nearby Greenbrier High School who plays out of Forest Hills: “Every golf course in town got hurt a lot by not having (out-of-town) play this week.”

During Masters week, Forest Hills charges $200 per round, including cart, range balls and a buffet. Their regular rate, with a cart, is $45 Monday through Thursday and $55 on Friday through Sunday.

Forest Hills refunded the money from advance payments to golfers who asked, but many customers just told Elliott to hold their tee time until the Masters is played.

“The Masters is taking a backseat to the coronavirus,” Elliott said. “To be honest, I’m not sure golf is something to be talked about right now.” 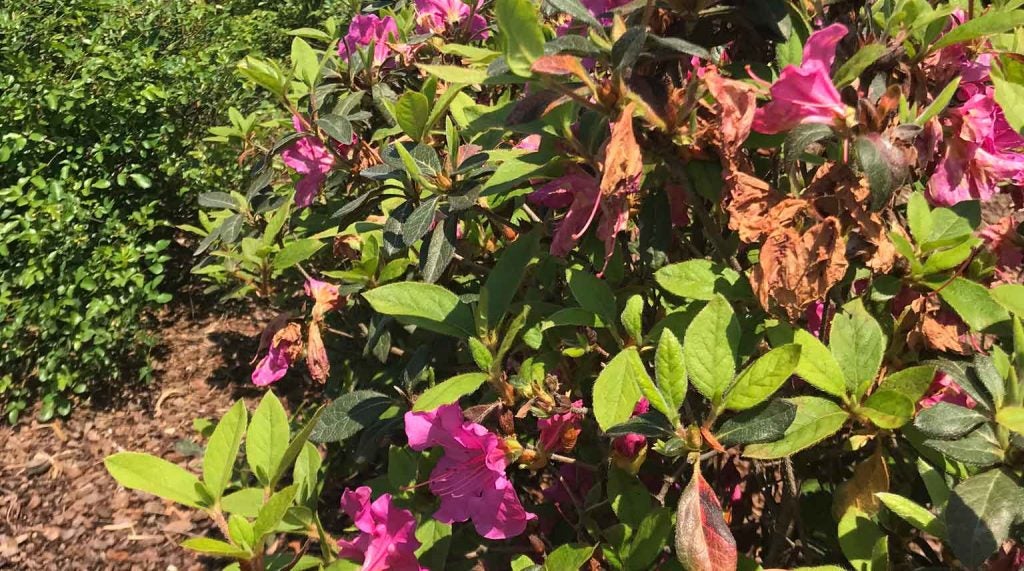 The azaleas bloomed early this year and are already withering.
david westin

Businesses and locals, who rent their houses out to Masters participants and patrons, call the tournament the “Second Christmas” or “Christmas in April” because of the money it generates. “Actually, it’s bigger than Christmas for us,” said Craig Calvert, the owner of an upscale restaurant that bears his name about a mile from the back patron gate at Augusta National.

Calvert’s, which has been in the same location since 1977, is normally open from Tuesday through Saturday. During Masters Week, the doors stay open Sunday through Sunday. “Being open eight straight days, it’s really more than Christmas,” Calvert said. Now, the restaurant is closed until further notice.

“Arnie was the best,” Calvert said. “I was back there prepping once during Masters week and one of the employees came rushing back there and said, ‘Hey, Arnold Palmer is out there and he wants to talk to you.’ He and [Palmer’s wife] Winnie wanted to make a reservation. That was kind of a nice moment when somebody like Arnold Palmer wants to talk to you.”

The restauranter said a Masters week without the Masters has given him “some time to reflect a little bit” on more important things than golf.

Other Augusta-area residents are taking consolation in the fact there will still be a 2020 Masters.

“As a golfer, I can’t imagine a year without the Masters,” said Smith, the UPS driver. “I’m hoping that when it does come, it will seem like everything is back to normal. Maybe that will be a good sign for us – like finally getting back to normal and doing things we normally do. I’m looking forward to that.”

The rest of the world is, too.