PALM HARBOR, Fla. — The last time Tiger Woods teed it up alongside Jordan Spieth in competition, he unraveled. Thursday’s opening round at the Valspar Championship was distinctly different.

More than three years after Woods shot a career-worst 82 during the second round of the Waste Management Open, Woods made five birdies and battled to a round of 1-under 70 in front of a packed house on a difficult day at the Valspar Championship, putting himself in a tie for 8th on a packed leaderboard. Spieth struggled to five-over 76, a surprising result at a course where he has historically thrived.

In that 2015 round, the pair’s games showed a telling contrast. Spieth was embarking on one of the greatest single seasons in golf’s history, while Woods attributed his suspiciously yippy chipping to being “caught between patterns.” He tied for last that week with an Arizona club pro, then slogged through a partial schedule the next several months before disappearing.

On Thursday, the pair’s games contrasted again, and it was Woods who looked far more comfortable amid what he called the “brutal” swirling winds and slick greens at Innisbrook. In the end, he hit seven of 13 fairways, nine of 18 greens, and took 25 putts on a day that pars were better than most.

“The wind was up and down and into the wind it just hit walls up there,” Woods said afterward. “We hit some shots and the whole group, the whole group got fooled a lot today. That’s rare. But it happened today. It was just a tough day all around.”

Crowds poured through the gates all morning on Thursday, intent on seeing one competitor in particular. Thirty minutes before the day’s featured pairing was set to tee off No. 1, 20 or so people gathered by the driving range, studying Spieth’s warmup routine. At the far end, they lined up a dozen deep to see Woods, who has never played the event. Spieth is famous, particularly as golfers go, and is accurately referred to as a “fan favorite.” But he not the same level of famous as Woods, who is the fan favorite.

Satisfied with his range session, Spieth walked through a tunnel of fans to the chipping green, attracting cheers as he went. Woods followed a minute or so later and attracted something altogether more than a cheer. Fans young and old charged up to the ropes for a chance to see him even closer, clamoring for his autograph, his approval, his attention.

Woods set up shop just behind Spieth and they hit chips in parallel, though they exchanged no words; each seemed dialed into his own routine. For about a minute, two of the world’s most famous golfers chipped together in silence, Spieth in front, Woods behind him, less-heralded sponsor’s exemption and University of Illinois student Dylan Meyer behind him.

As Woods, Spieth, and Henrik Stenson headed to the first tee for their 12:46 p.m. time, the crowd and accompanying buzz moved with them.

Spieth said before the round that he expected he’d be more nervous on the first tee because of Woods’s presence. Neither Woods nor Spieth looked anxious as they stretched out on the 1st tee. But they did look to be in deep concentration. Woods’s first tee warmup calls to mind Michael Phelps on the pre-race blocks, getting in final stretches and harnessing nervous energy before the plunge.

Spieth lost his tee shot to the right, Stenson missed his to the left, and Woods punished his 320 yards to the skinny part of the fairway.

A well-played hybrid from the right rough set up Spieth for a simple up-and-down from just short of the green. Woods put himself in a more difficult spot when his long-iron approach sailed into the rough just past the green. Coming back, he hit the first and perhaps most difficult of his day’s spectacular shots: a high, delicate flop that landed just so and then released down a slippery path around the edge of the hole, pausing to peeking in the back side of the cup before settling a couple inches away for a tap-in birdie and a wide smile.

On No. 2, Spieth lost his tee shot to the right again, just a pace from the water hazard, while Woods split the fairway and grabbed a sandwich from Joe LaCava. He spoke and smiled very little for the first several holes but looked very much in his element and in control.

From the front fringe on No. 3, Woods liked the look of his putt so much that he gave his putter a raise and began to walk in the putt until the lip spun it away at the last moment, robbing the onlookers of the fist-pumping delirium they so dearly desired.

Massive crowds, packed shoulder to shoulder several deep, posted up several holes in advance to catch a view of the action. One couple who said they’d been waiting for an hour and a half by the 4th green cussed out the cameramen who inevitably settled in front of them, ruining the view.

“We all know who’s coming,” a marshal called out by the 4th tee. “Good golf decorum and good golf etiquette, please.”

His wishes were largely respected, although it wasn’t clear what category of decorum it fell into when one fan shouted out to Woods, who was mired in a moment of indecision as the wind swirled overhead.

“Everyone’s missing deep left, Tiger,” he said. “They’re all going deep left.” It would have been helpful information, but it went unheeded: Woods chose the longer club and ended up at the base of a tree some 20 yards long of the green. He did well to escape with a bogey.

Throughout the day there was little need to actually watch the group, merely to listen. Stenson’s best efforts were greeted with tepid enthusiasm. Jordan was cheered for loyally. And Woods’s every move was treated with frantic, urgent attention, roars of approval and moans of disappointment betraying the setting, a Thursday afternoon at an early-season event with little historic pedigree.

Early on, Woods was particularly strong with his long irons. His 2-irons off the tee were reliable. He found the edge of the fringe on a blind approach from 244 yards on No. 5. And from 220 yards, he hit it to 12 feet on No. 8, setting up a crowd-pleasing birdie.

Just when it seemed he’d settled into his round, Woods began to make things exciting. After clanking his approach into the front right bunker on No. 9, something happened: As he began to take the club away, someone from the next hole over yelled out “Fore right!” and Woods stopped his swing halfway through, sending a murmur through the crowd. He got out of the bunker, wiped down his club, reset, and hit a high, soft bunker shot that was close but not close enough, as his par putt slid past on the high side.

Woods energized the crowd with a 12-footer for birdie on 10 and made a nifty up-and-down greenside on No. 11 to jump to two-under for the round and into a tie for 6th. By contrast, Spieth’s round went quickly south after his par-birdie start. He bogeyed five of the next seven holes, and struggled on the green: Between the third hole and the 13th, he faced eight putts between 8 and 15 feet and didn’t make a single one. His discomfort was capped off with a missed three-footer on No. 13 that sent him to five-over, where he would finish the day.

Woods’s birdie streak didn’t last long, either: missed greens and missed six-footers meant bogeys on 12 and 13. His frustration boiled over when his approach shot on the par-5 14th came up just short and he slammed his club in frustration. “It’s hard, hard to commit to it,” Woods said of the swirling wind. “If it blows one direction, it’s one club, if it blows another, another club. We got caught in between on probably about three, four clubs today.”

No. 16, the beginning of Innisbrook’s closing “Snake Pit” stretch, bit Woods pretty good — but then Woods bit back. When his 2-iron settled behind a tree down the left side, he was forced to improvise. Then he hit a miraculous hook around the tree, where the ball bent quite a bit but the club bent even more as Woods struck the tree in his follow-through and, unable to hold on, flung the club forward after impact. 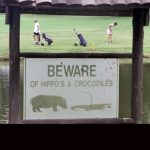 You may also like WATCH: Tiger makes incredible escape from trees after slamming trunk on follow-through
Fans held their collective breath as he walked up the fairway wincing and holding his wrist, but Woods shook off what appeared to be a mere scrape in time to get up and down from the rough just short of the green. His next act was even better, and much simpler: he nearly holed a cut 5-iron on the 199-yard par-3 17th, tapping in for a birdie that got him into red figures and a tie for 8th, where he would remain after parring 18.

“I enjoy when par is a good score,” Woods said. “It’s a reward to go out there and make a couple birdies here and there and I like that type of challenge.”

The day felt like another step forward for Woods, and a surprisingly poor start for Spieth at a traditionally comfortable spot. In 2013, he finished T-7 here to earn temporary special PGA Tour membership, while in 2015 he took home the trophy. He’s finished inside the top 20 in each of his five starts here, and it’s a great course for a player like him: a course that neutralizes distance while valuing patience and creativity around the greens.

Stenson fared little better, shooting three-over 74 to finish in the middle of the pack. “It was a tough day for everyone,” Woods concluded. “I got a great pairing this week, Jordan and Henrik, two great guys.”

A tough day for everyone, to be sure, but less tough for Woods than for many others. Innisbrook is unlikely to get much easier during the group’s 7:56 a.m. Friday round, nor as the weekend approaches, and pars will remain rewards. Over the years, nobody has worked harder to earn them than Woods.

“It’s a really, really good grind out here,” he said.