Tiger Woods’ first round of the U.S. Open explained in 18 sentences

PEBBLE BEACH, Calif. — Tiger Woods’ round, Thursday in the U.S. Open, in 18 sentences, with limited commentary as necessary.

That’s notable, because so often, off first tees, he misses fairways. The first at Pebble is a long iron into an uphill fairway, so if he missed that one, it would have been troubling. He made a par.

2. His pace as he walked off the second tee was studiously slow, just as it was off the first — he was a study on energy-conservation, until he pulled his tee shot on the par-3 fifth left of the cart path.

3. After pars on the second and third holes he stiffed his on the par-4 fourth and spent two minutes, as the others played, taking off a gray sweater vest and putting on a black sweater, which is what he wore when he made his first birdie of the day, from four feet. 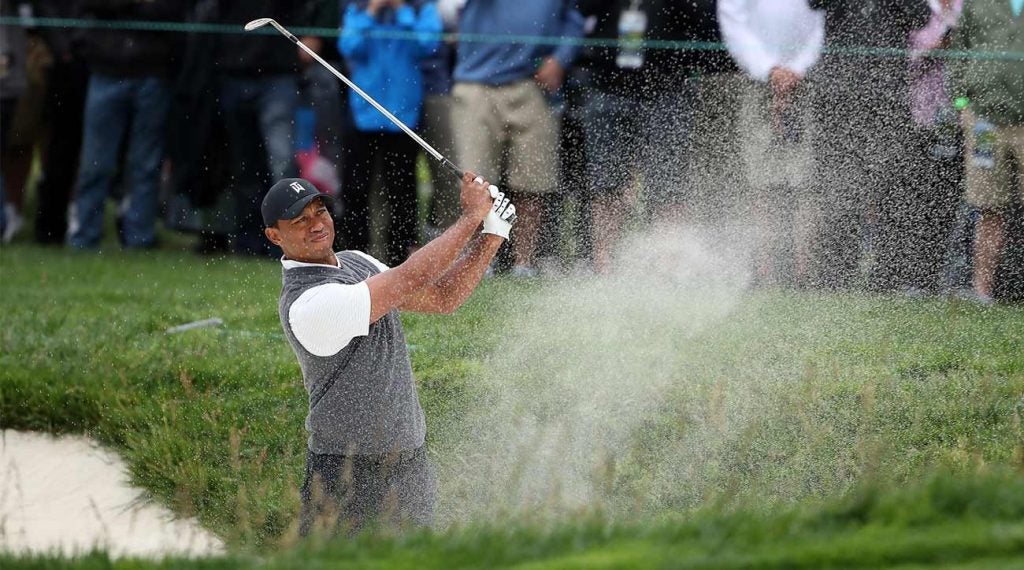 Tiger Woods blasts out of a bunker during the first round of the 2019 U.S. Open.
Getty Images

4. He was out of the sweater and back in the vest by the fifth tee.

In your wildest imagination, would you ever change anything after making a birdie?

5. He was paired with two other U.S. Open winners, Jordan Spieth and Justin Rose, the latter of whom ate a massive Whole Foods sandwich on the front nine and a banana on the back, while Tiger ate nothing, not that this reporter could see, unless you count gum.

6. Woods is accustomed to commotion, but how he played the itty-bitty wedge off the short par-3 seventh with a boom camera rising behind him is a mystery.

7. Michael Murphy, 88-year-old author of Golf in the Kingdom, walked the front nine with my colleague Alan Shipnuck and at one point started talking, with striking alacrity, about Woods in the context of the Hero’s journey.

Per Wiki: [The] broad category of tales and lore that involves a hero who goes on an adventure and in a decisive crisis wing a victory, and then comes home changed or transformed.

He turned one under and he stayed one under. Lots of one-putt greens.

9. When Woods won the 2000 U.S. Open at Pebble by 15 shots, that was not an example of the Hero’s journey, and little about his play on Thursday particularly brought it to mind.

His win at Augusta in April, 11 years after his last major win, was out of the Hero’s journey playbook.

10. Woods smoked his tee shot off 18 with a 3-wood, and it’s a good thing he did, because he only got it about 10 yards past the tree on the right side of the home fairway.

11. Eighteen was his best chance for a birdie on the back nine, until he drew a really awkward lie in a greenside bunker with his second shot.

Nine straight pars on the back, 70, one under for the day.

That tee time will require him to get up at about 4 a.m.

He often does, but you could see them clearly when he took his stance for that bunker shot on 18, with his ball in the trap and his feet out of it.

14. Woods was witness to a clinic, courtesy of Rose, who shot a first-round 65, the score Woods shot in the first round in 2000.

What Woods told Curtis Strange of FOX when the round was over.

17. He talked to reporters.