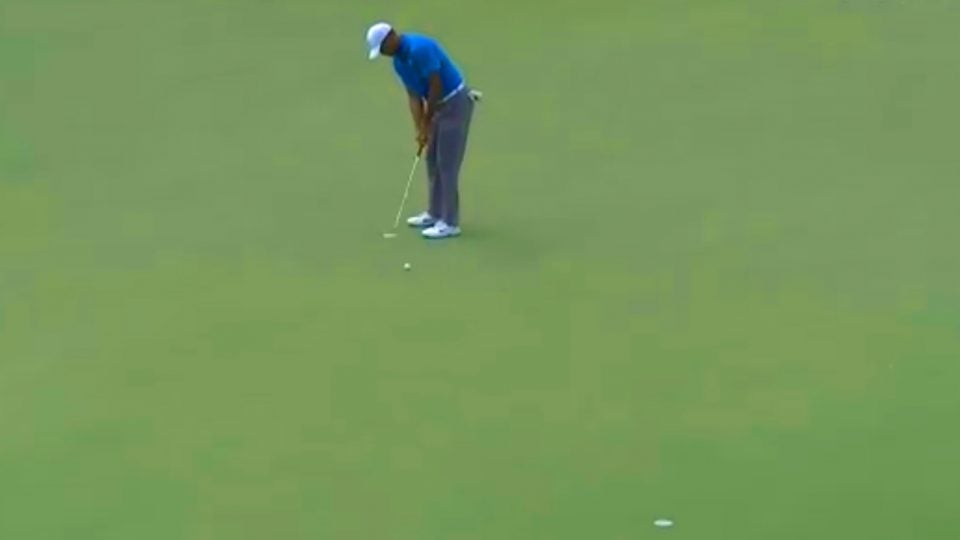 Tiger Woods putts for birdie on the 1st hole Saturday at the Tour Championship.
@PGATOUR

Tiger Woods had an enormous amount of pressure on his shoulders to begin his round Saturday at the Tour Championship. But he got comfortable quickly, ringing up six birdies over his first seven holes to charge into a huge lead.

Woods began the third round tied for the lead with World No. 1 Justin Rose at seven under. After Rose hit a shaky tee shot at 1, Woods powered a drive down the center of the fairway. From there, he hit his best approach shot of the week on the difficult opening hole. His ball came to rest just over 22 feet from the cup. 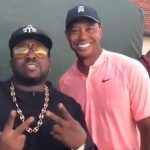 You may also like Atlanta’s got Tiger’s back: Rapper Big Boi shows up to support Woods at East Lake (and post some hilarious videos)

With massive crowds looking on, Woods buried the long putt to move to eight under. Here’s the momentum-building birdie putt.

On top of Woods’s birdie, Justin Rose made bogey at 1, so Tiger walked to the 2nd tee with a two-shot lead, with 35 holes to go.

But he was just getting started.

At the 3rd hole, Woods hit a sterling wedge from 141 yards that nestled up just 8 feet from the hole. He rolled that in to move to nine under.

Another birdie for @TigerWoods.

Is this the week?

Rose gave up another shot at the 2nd hole (which he got back at the 3rd), but Rory McIlroy was also making a charge elsewhere on the course. Woods couldn’t afford to let up, and he didn’t.

On the next hole, Woods hit his third consecutive fairway, then sank a 21-foot putt for his third birdie in his first four holes. That moved him to 10 under, three ahead of Rose and McIlroy.

What did Tiger follow that up with at the par-4 5th hole? Another birdie, of course. This one moved him to 11 under, increasing his lead to four shots. You can watch that birdie below.

He leads by FOUR.

Up the next was the 6th hole, the first par 5 on the course. Woods was not about to break his birdie streak there. When his second shot caught a tough lie in a greenside bunker, he hit a nifty sand shot to get within 7 feet. You can guess what happened next.

It looked like Tiger’s unbelievable run would come to an end at 7, where his tee shot found a fairway bunker. But another amazing shot followed, setting up a 7-foot birdie putt that never left the center of the cup. With that birdie, Woods stood at -13 with a five-shot lead.