In 2016, European Ryder Cup rookie Thomas Pieters put himself on the international golf map, winning four points in five matches during a 17-11 U.S. victory. Despite some pleas for his inclusion as a captain’s pick, the 26-year-old Belgian won’t be on this year’s squad, but that didn’t keep him from letting loose a series of Ryder Cup takes in an interview with bunkered this week.

Pieters, ever a fiery on-course presence (we last checked in with him after he snapped his putter in two) apparently didn’t think much of the setup at Hazeltine National in Chaska, Minn., nor of the American fans heckling from beyond the ropes. 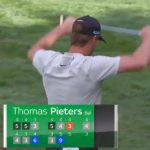 You may also like WATCH: Thomas Pieters snaps his putter in two after ugly quadruple-bogey 9 at the European Masters

“For me, it wasn’t that bad because they didn’t know who I was,” he said of the spectators. “They didn’t have any dirt on me or anything like that. But for Rory, yeah, it was pretty hostile. They shouted stuff at him that you shouldn’t shout at anybody anywhere.”

Nor could Pieters resist a jab at the Minnesota faithful and their tolerance for alcohol. “Maybe that’s because they sell beer at 7am and Americans can’t drink,” he said. “But to be honest, you don’t really hear the words most of the time. It’s just a big wall of noise.”

As for Hazeltine itself? “The set-up of the course was ridiculous. You could hit it anywhere.”

Pieters included U.S. stalwart Phil Mickelson in his critiques, too. “He was sometimes hitting it, like, six fairways left or right but was still able to get it on the green and then make a 40-footer. I didn’t think it was a great Ryder Cup set-up, to be honest.”

You can read more of the Pieters interview here.