By Michael Bamberger and Alan Shipnuck Tiger Woods was disappointed with his rules gaffe but fully owned it.
Photo Illustration / Getty

Ed. note: This is the eighth installment of The Masters That Never Was, a fictional account of how the Masters Tournament might have played out had it been conducted this week at Augusta National Golf Club.

AUGUSTA, Ga. — After an unprecedented Sunday of drama and controversy, the winner of the 83rd Masters remains unknown, but a champion for the ages has already emerged. Rory McIlroy and Jordan Spieth will return to Augusta National on Monday morning at 9 local time to consummate their sudden-death playoff. Tiger Woods will not be joining them, having earned an immortal place in the annals of sport by disqualifying himself as he stood over a short putt that would have won him a second straight Masters, on the second playoff hole.

“It’s the craziest turn of events I’ve ever heard of,” McIlroy said. “I’m gutted for Tiger. But we’ll play on to honor him.”

And Woods will be on campus when the winner finally is determined on Monday — presuming that the McIlroy-Spieth playoff is able to finish in the 11 available hours of daylight.

“Hey, I don’t care when it ends. I’m gonna be here to help somebody into a coat,” Woods said. Earlier in the week, during his press conference, he had said he was starting a chapter in his life where he is committed “to giving to the little ball-and-stick game that has given so much to me.” In a nod to that on Sunday night, Spieth said, “No one has ever walked the walk like Tiger just did.”

Woods’ noble act of sportsmanship — calling a penalty on himself for an infraction that only he could see — capped a pulsating final hour that will be discussed and debated as long as the game is played. No matter what happens on Monday, this 2020 rite-of-spring Masters will go down in history right alongside 1958 (Palmer’s first), 1986 (Nicklaus’ sixth), 1997 (Woods’ first), 2019 (Woods’ fifth) — and, of course, 1935, when Gene Sarazen’s win turned the Masters into the Masters.

McIlroy, needing a Masters title to become the sixth man to win the career Grand Slam, had a 27-inch par putt on the 72nd hole to win the tournament outright. He and Woods were in the day’s final twosome. As McIlroy was stroking his putt, a sound never before heard at Augusta National — the clanging electronic ring of a cellphone — reverberated through the air. McIlroy flinched at impact, smashing what would have been his winning par putt into the back of the cup. The ball fell in, went dark, then popped up and out and finished at the 12 o’clock mark, teetering on the edge of the hole but refusing to drop. McIlroy fell to the ground, arms extended to the heavens in anguish, looking like Willem Dafoe in the climactic scene in “Platoon.” He finally found his footing and tapped in for 69, the same score Woods made.

After signing their cards, the two golfers were hustled to the 18th tee for the first playoff hole. Waiting there was Jordan Spieth, who, needing a birdie at the last to get to 10-under, had holed his third shot from the front left bunker after having his caddie, Michael Greller, take out the flagstick.

The scene of McIlroy missing and laid out on the Augusta green like a flayed fish was an image that golf had never witnessed before.

“These golf gods,” Nick Faldo, the CBS analyst and three-time Masters winner, told millions of viewers after McIlroy’s putt to win failed to drop. “They have a sense of humor you can only call sick. Winning your first green jacket is so hard.”

“And now, Easter Sunday, we must ask ourselves: Can McIlroy rise again?” said Faldo’s broadcast partner, Jim Nantz. “Or will it be the second coming for one of these other proud champions?”

“Well, he’s going to have to get up off that green first,” Faldo said. 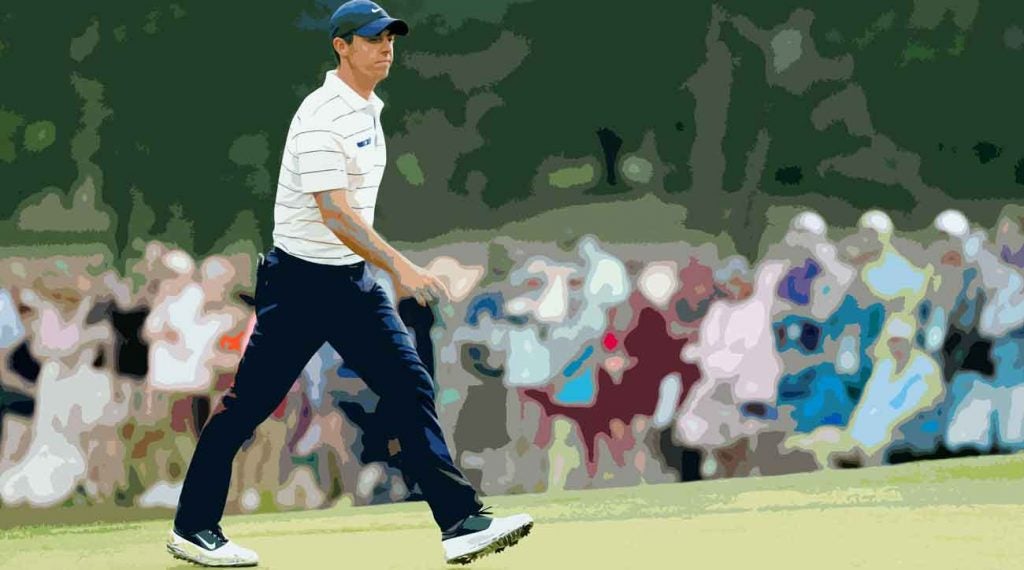 After a crushing miss on 18, Rory McIlroy paced off the green with a head of steam.
Photo Illustration / Getty

Woods and McIlroy made it to the 18th tee for the first playoff hole at 7:26 p.m., 31 minutes ahead of sunset. Spieth already had his ball on a tee, ready to play. Alas, the players were required to draw numbers to determine the order of play, and he was second.

“Just leave your tee there. I’ll use it,” McIlroy said. He smoked a drive, and the tee did not move.

All three players made pars on 18, each missing mid-range birdie putts. After Woods’ lipped out, he pointed at Augusta National chairman Fred Ridley and said, “I told you Freddy, ever since you redid this green, the ball doesn’t take the break the way it’s supposed to.” He saw that Ridley, who had developed chest tightness after the cellphone incident, looked to be in further pain and added, “But it’s all good, Fred. Change is good.”

The playoff moved to the neighboring 10th. Spieth and McIlroy both fanned 3-woods that finished at least 30 yards right of the fairway, shockingly offline. Woods pulled his driver, a club he didn’t really need to hit with his opponents in trouble. But he hit it anyway. Looking to play a high, hard cut, he instead uncorked a double-crossed dead-pull that hit one of the cabins on the left side of the 10th hole and settled in its front yard, leaning against a pine cone. Woods was so far from the usual playing corridor that a pair of cameramen sprinted through the rough, trying to get in position. Pinkertons strained to control the crowd that surged down the hill, jostling for views.

An exhilarating day was getting wilder by the minute. Hope Hicks, Woods’ new communications chief, emerged from the cabin near where her boss’ ball had settled, unaware of what was transpiring. She was dressed in a red-and-black pleather catsuit, part of The Sunday Collection, a new women’s clothing line that Woods’ girlfriend, Erica Herman, recently launched.

Woods, a picture of equanimity, saw her and said, “Hicksie — love what you’re wearing! But one giant step to your right, please, while I take care of some gardening.” Woods then crouched over his ball to inspect the lie, gently moving some of the adjacent pine needles. 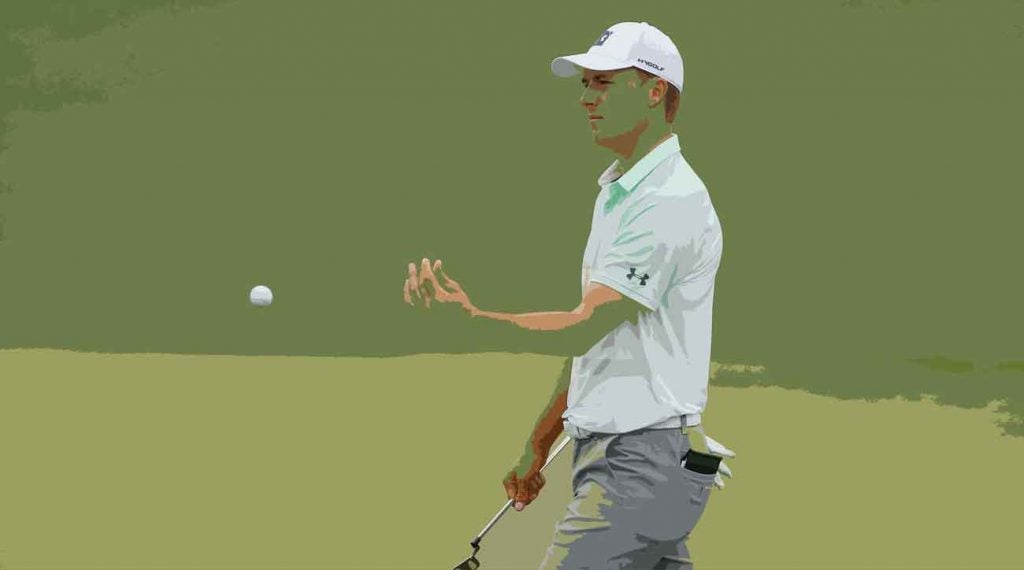 After much consultation with his caddie, Joe LaCava, Woods ripped a hooded 3-iron, disintegrating the pinecone and bending his ball through an opening in the trees. His ball chased to within a few paces of the front of the green. It was instantly a legendary shot.

Spieth did well just to punch out sideways and to the safety of the fairway. Moments later, McIlroy, having found a more favorable spot among the trees, played a sizzling cut shot into the front bunker. Emerging from the forest together, amid all that tension, McIlroy said to his playoff opponent, “This is what it’s all about, isn’t it?”

It was a famous golf quote but from long before either of them was born. Speith, of course, knew it.

The game had never had three more appealing protagonists engaged in collegial battle, at least not since not since its Palmer-Nicklaus-Player heyday.

For his third shot, Spieth played a drawing 7-iron to 20 feet above the hole. McIlory’s splash came up 8 feet short. Woods’ potentially winning chip hit the flagstick but rattled out, trickling 3 feet away. Somewhere, Chris DiMarco smiled wanly. Woods marked his ball and inspected it.

By now the sun had dipped below the pine trees on the horizon. While McIlroy and Spieth studied their putts, Woods stood on the edge of the green, eyes closed, head thrown back. He appeared to be in a meditative state. Spieth narrowly missed his putt, and then McIlroy’s own par attempt horse-shoed out. Twice, in two holes, he had suffered such close calls, but this time he only laughed.

Now the stage belonged to Woods alone. He was one putt away from his 16th major championship victory. Woods walked slowly toward his marker and set his ball down with great care. He was kneeling over it, like a catcher at home plate, examining his ball for an unusually long time.

McIlroy removed his cap, convinced the tournament was over, anticipating a congratulatory handshake. He ran his hand through his hair. Spieth then did the same, with less fanfare. (And less hair.)

But then Woods picked up his ball, leaving its marker right in place, found Fred Ridley on the walkway to the 11th tee and conferred with him. The conversation was short and private, but sources said later this is what was said:

“Fred, this is unlucky but true. I can see it plain-as-day. This is a nonconforming ball. I grabbed a ball from the wrong pocket when I went from the first playoff hole to the second. It’s marked exactly the same as my gamers, but I had asked for some other balls to be made for me that had just a little less shine on them. They’re prototypes. They haven’t been approved yet. It has a duller finish, a slightly heavier paint, sort of like the MacGregor ball that Jack used circa 1970. I’m out.”

Ridley, a former president of the USGA, said, “I believe I would have the authority, as the chairman of this event, to allow you to continue to play, as long as there is no material difference in the two balls.”

“No, I couldn’t accept that,” Woods said. “I would know. You can’t play with a ball that’s not on the approved list. It’s entirely my fault. I was messing with this ball in the practice rounds. I could actually tell it fell out of the air faster. It might be a half-a-gram heavier. Did kind of have a funny flight off 10 tee, right?”

“Your sense of humor in this extraordinary moment reveals the depth of your character,” Ridley said. “But give me a moment here.”

Ridley then made a series of urgent calls, as the sun dropped ever lower. The 10th green was covered in long shadows. In a moment without precedent in the sport, Ridley went to the center of the green with Woods and said, “Our defending champion has a short announcement.”

“Ladies and gentlemen, I know this is not a storybook ending, but life is not a storybook, is it?” Woods said. “I unfortunately have to disqualify myself from the tournament as I inadvertently played with a nonconforming ball — and a ball not yet approved by the USGA — on the second playoff hole.”

An audible gasp went up among the crowd. A child began to cry.

“No need to cry, people,” Woods continued. “As Tom Watson once said after a wrenching loss, ‘This ain’t no funeral.’ In fact, it was Tuesday night, at the Champions Dinner, that Tom shared with me a similar incident from the 1972 Jackie Gleason. Tom said, and I agree, ‘If you’re not 100 percent certain you’ve played by the rules, then you haven’t.’ That’s the foundation of the game right there. I have to step aside here and let my two young friends duke it out, and I’m sure they will! Monday morning, people. I’ll be here. You should be, too!”

There was a rousing cheer, at once similar and different to the response Woods got upon winning his fifth Masters title last year.

Woods then motioned for his daughter and son, Sam and Charlie, to join him. The three of them, hand in hand, walked the wrong way up the 10th fairway, heading to the clubhouse, the moon rising above it.

The playoff recap from The Masters That Never Was will be published on GOLF.com on Monday evening.