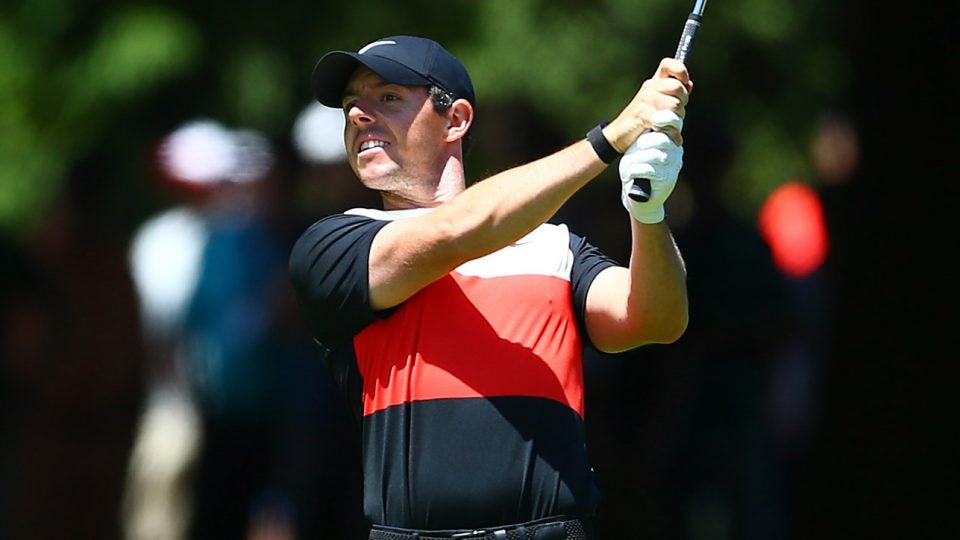 The final event before the 2019 U.S. Open is set for its final round, with Rory McIlroy, Matt Kuchar and Webb Simpson firmly in the mix. Here’s what you missed from the third round of the 2019 RBC Canadian Open.

Rory McIlroy made a run up the leaderboard with a sterling round of six-under 64 on Saturday at Hamilton Golf & Country Club. That was good enough to move him into a tie for the lead heading into Sunday’s final round.

The reigning Players Champion has high hopes for the final two majors of the year beginning next week at Pebble Beach. A win in Canada before boarding a flight to California would easily put him among the favorites to hoist the U.S. Open trophy a week from now.

To do so, he’ll have to hold off a large group of contenders and his two co-leaders: Webb Simpson, who fired a 67 on Saturday, and Matt Kuchar (69).

Tournaments
Why Rory McIlroy says the U.S. Open setup at Pebble Beach is high-stakes for the USGA

Spots in the 2019 Open Championship at Royal Portrush are on the line this week in Canada. The top-three players who finish inside the top 10 who have not already qualified will earn their ticket to the final major of the year in Northern Ireland, and Sunday’s race is shaping up to be a tense and crowded affair.

Graeme McDowell’s chances are of special interest, given that he grew up in Portrush. McDowell is eight under and T9 after shooting an even-par 70 on Saturday. Open hopefuls Adam Hadwin (12 under) and Mackenzie Hughes (nine under) are ahead of him, with three others tied at eight under also looking for an Open birth: Jonathan Byrd, Erik van Rooyen and Nick Taylor.

Defending champion Dustin Johnson began Saturday’s third round at four under, well back of the lead, but well within striking distance for one of the best players in the game. D.J. didn’t quite play himself out of the tournament on Moving Day, but he didn’t help his chances much.

Johnson made four birdies in Round 3, but two bogeys on his first nine cost him. He finished the day with a two-under 68 and will need a heroic round to win his second Canadian Open title in a row.

Tournaments
Wall-to-Wall Equipment: Why Dustin Johnson’s new putter is a blast from the past

Koepka looks to next week

Reigning back-to-back PGA champion Brooks Koepka hasn’t been in top form all week. A second-round 66 suggested he might make something happen over the weekend in Canada, but a disappointing two-over 72 on Saturday dropped Koepka to two under for the tournament.

You can’t blame him if his focus is not entirely on the tournament at hand; he has history on his mind. Next week, Koepka heads to Pebble Beach to attempt a feat that only one other player has completed: three-straight U.S. Open victories.

Brandt Snedeker shot an incredible 10-under 60 on Friday, but he couldn’t keep the momentum going in Round 3. Snedeker offset three birdies with two bogeys, finishing with a 69. With 18 holes to go, he’s T4 and one shot back.