Wall-to-Wall Equipment: Why Dustin Johnson’s new putter is a blast from the past

Built to a T

Dustin Johnson came oh-so-close to winning the PGA Championship on Sunday with something new in the bag. That would be TaylorMade’s Spider X putter (SuperStroke Traxion Pistol GT Tour grip), an updated version of the Spider Tour mallet he’s been using for a majority of the time since the 2016 BMW Championship.

Johnson tested numerous versions of Spider X, going all the way back to the Genesis Open, but could never find a suitable replacement until he returned to a custom T-line that first made an appearance on the crown of his putter during the 2018 Sentry Tournament of Champions.

Struggling with his putting leading up to the 2018 season, Johnson tested 12 identical Spider Tour putters, each with a different sight line (long lines, short lines, dots), before settling on the T-line to improve his aim. Spider X was designed with a True Path system on the crown to enhance alignment and focus, but Johnson still chose to add the same T-line to the crown — a sign he’s likely sharpening his alignment consistency to the hole.

The first time Johnson added the T-line to his putter in Maui, he left with an eight-shot victory. Johnson nearly made it 2-for-2 with an alignment aid that seems to be working for the former U.S. Open champion, who ranked 29th in strokes gained: putting for the tournament.

Mired in a putting slump and looking for a jolt, Luke List took a page from Justin Rose’s book and gave the Axis1 Tour Rose Mallet, initially designed for one of the best putters in the world, a shot at Bethpage Black. The results were incredibly promising for List, who recorded the best major championship finish of his career with a sixth-place showing while ranking second in strokes gained: putting.

List picked up more than seven strokes on the field with the putter, which is slated to hit retail shelves in the near future. Rose’s success with the putter has seen other players give Axis1 a hard look as well. Two weeks ago, Joey Garber and Sepp Straka both switched to an Axis1 Tour-S at the AT&T Byron Nelson.

Jordan Spieth replaced his Titleist 915F 3-wood with a 15-degree TS2 after noticing an increase in distance with his preferred ball flight during testing. Next to Spieth’s Scotty Cameron 009 putter, the 915 fairway wood was one of the “oldest” clubs in his bag prior to the PGA Championship. The 3-wood is still equipped with his usual Graphite Design Tour AD DI 7X shaft.

Aaron Wise, Adam Hadwin and Emiliano Grillo all switched to Odyssey Stroke Lab putters at the PGA Championship. Wise tested several models before settling on a Toulon Palm Beach that helped with his aim and tightened up his stroke consistency. Hadwin opted for a Stroke Lab Double Wide Flow with toe hang, allowing him to release the head and get putts started on his intended line. Grillo had more of a head start, working with a Toulon Las Vegas several weeks ago before feeling comfortable enough with the putter to give it a shot.

It was a good run

The biggest equipment surprise from the PGA Championship had to be Steve Stricker shelving his original Titleist 710 AP2 irons for the new 718 Series. According to Tour rep J.J. VanWezenbeeck, Stricker came around to the idea of obtaining more distance and forgiveness and decided put the irons in play for the first time at the PGA Tour Champions’ Regions Tradition — an event he went on to win the week before heading to Bethpage.

Pour one out for Steve Stricker’s Titleist 710 AP2 irons. Irons were finally replaced last week by 718 AP2, which Stricker used to win on the Champions Tour. pic.twitter.com/dVqkv6QVGA

As expected, Stricker still had the 718 AP2’s in the bag when he arrived. The irons are equipped with Project X 6.5 shafts.

Hideki Matsuyama was once again spotted testing a new putter in addition to his “ace” gamer that usually makes the cut on Thursdays. This time around, it was a Scotty Cameron Newport 2 SSS Prototype made from surgical stainless steel and boasting a Tiger-esque profile.

Matsuyama tested the custom Cameron creation through Wednesday afternoon before ultimately deciding to keep it on the bench.

With the temperature hovering around 50 degrees early in the week, Louis Oosthuizen tested different driver builds to find a suitable cold weather option. Ping Tour reps noted Oosthuizen prefers a softer feel with more kick when the temperature drops, which led him to try out a Project X T1100 (mid-spin) shaft without any tipping. The South African typically has the shaft tipped one inch in his Ping G400 LST driver.

With the U.S. Open and Open Championship being contested in cooler coastal climates this season, it’s possible Oosthuizen will have the opportunity to put the cold weather driver option to the test at some point.

Jason Day was photographed with two different TaylorMade Milled Grind Hi-Toe lob wedges in the bag on Wednesday, a number that made it clear he was still testing different options with the soft turf conditions at Bethpage Black. Day ultimately settled on a C-Grind version that allowed the leading edge to sit tight against the turf and nip the ball clean at impact. 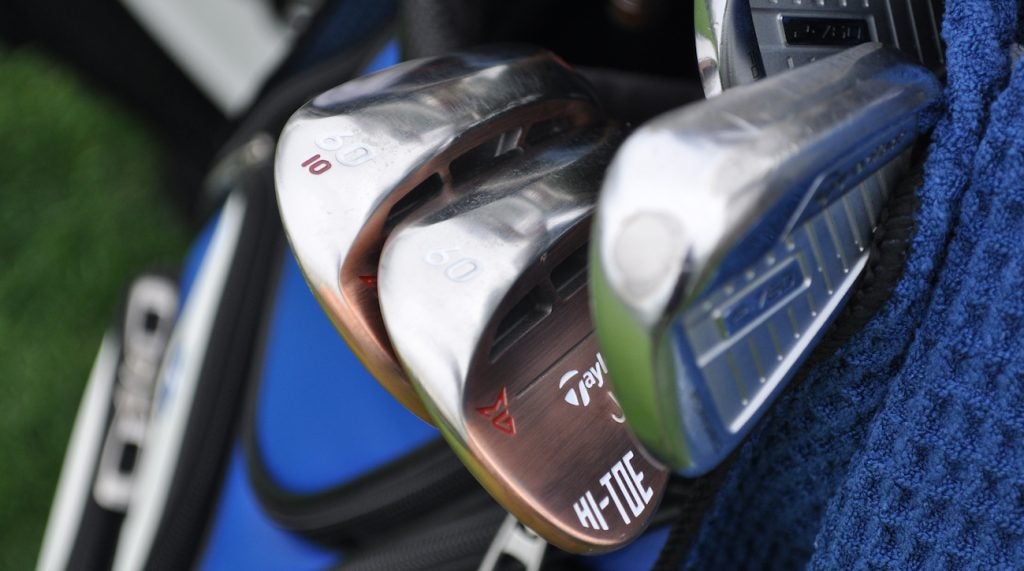