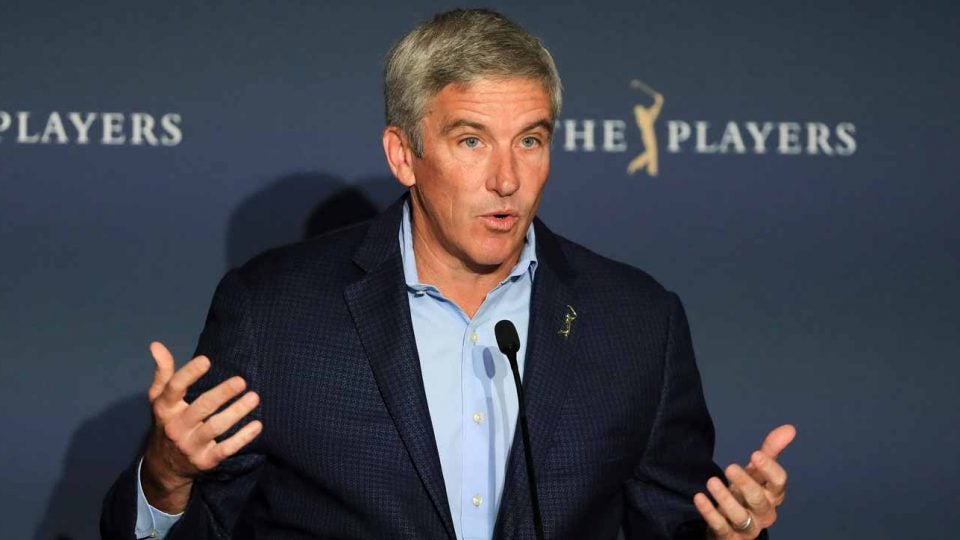 PGA Tour commissioner Jay Monahan has worked with the game's other governing bodies to put together a schedule for golf's return.
Getty Images

Three things, before we dive in. First, I,  like Andy Dufresne, believe that hope is a good thing, maybe the best of things. So when golf’s governing bodies got together to announce an ambitious schedule that would allow many of the game’s biggest events to still be played this year, that was a good move.

Second, I’m going to do my best not to do any pandemic forecasting. I’d be guessing, just like you. Third, I’m just here to ask the questions — any answers we stumble upon just count as bonus. With that, let’s dive into 18 burning questions facing the golf world:

If you, like me, were confused by yesterday’s announcement into thinking that the next possible Tour event was going to happen in mid-June, you’re not alone. Darren Rovell thought the same thing.

That’s not what we said on start date.

That’s right, the Charles Schwab Challenge is still a go for late May! There are, in fact, four events still on the PGA Tour schedule before “Potential PGA Tour Tournament” enters the fray. Speaking of which:

2. What’s the first mystery PGA Tour event that will fill in the schedule?

Couched under “TO BE CONFIRMED,” The Tour’s release mentioned an event to take place June 15-21 — formerly U.S. Open week. Rumors have swirled about a potential Memorial Tournament to be held that week, perhaps without fans. But that’s contingent on a postponement — at the moment, the Memorial is still scheduled for the first week of June.  So what other tournament could fit there? When the first tournament actually happens, we’ll know a lot more, and everything else will follow from there.

3. What does that mean for the Tiger-Phil-Tom-Peyton Mega-Match?

Initially, the plan was for misters Woods, Mickelson, Brady and Manning to play a match in Florida about a month before the PGA Tour was going to come back. Does that mean we’re looking at golf in a few weeks? Does Brady’s new Seminole membership give us any clues? Will this date shift with more potential Tour cancelations? Does Brady know Tampa is on Florida’s west coast, and Seminole isn’t? (I warned you there would be more questions than answers…)

4.  What happens if a player or caddie tests positive?

At the Players Championship, Rory McIlroy faced this question, and gave a simple answer. “We’d need to shut it down, then.” If all the mechanisms get going again only for a player or caddie to show symptoms and then test positive, will everything shut down again?

Tournaments
What is would-be Masters week like in Augusta with no Masters? We found out

5. When will we first see fans?

Look, we’ve got folks betting on mini-tour events. Marble racing. Virtual NASCAR. We’re certainly not going to get hung up on whether or not fans can attend the Wyndham Championship. But it will be one of the obvious questions the Tour will have to address before it can come close to a return.

If the season proceeds as planned, will that be considered enough of a season to keep normal rules in place around promotion and relegation from the PGA Tour? While the Tour has completed a meaningful chunk of its season already, the Korn Ferry Tour has held just six events. Will those players earn promotion as normal? None of this is easy to figure out.

7. What do we call it if someone wins all the scheduled men’s majors?

The Grand Slam seems to require all four. But with the Open Championship canceled, the door opens for someone to win at Harding Park, Winged Foot and Augusta. Do we go with “Triple Crown?” Or is this more like the “Tiger Slam” since it’s just a one-off? Luckily we have a while to answer this one.

8. What are we doing for Ryder Cup picks?

Because the number of qualifying tournaments is continuing to shrink — including the point-heavy Players, Masters and U.S. Open (scheduled the week before the Ryder Cup, too late to determine teams) — is it possible we’ll see U.S. and European teams chosen entirely by captain’s picks? And if that is the case, should we just always do that?! I won’t deny I’m excited by the idea.

9. How many events will Tiger Woods play?

We know the guy doesn’t like back-to-backs. Now we’re talking about a potential schedule with the PGA Championship going into the Wyndham, then three FedEx Cup events, one week off and then the U.S. Open and Ryder Cup in back-to-back weeks. Would he skip the FedEx Cup? We have no idea what his health situation will be in late August, anyway — but we know this feels like a lot of golf for the guy.

Now, for an Augusta-centric back nine of questions…

10. What happens to the Fall Series events?!

This may very literally be the question nobody is asking, but think of it this way: what October events will top pros use as warmups for Augusta National? I’m only half-joking when I say that a lead-up of the RSM Classic and the Sanderson Farms Championship would be a fantastic Southeast Swing in the weeks leading up to Augusta.

Because the Tour Championship wraps up ahead of the rescheduled U.S. Open and Masters, you’d have to assume that the FedEx Cup (and $15 million prize) will be awarded before either event is played. So will there now be two Masters and two U.S. Opens contributing to next year’s FedEx Cup schedule? It seems like it, unless there’s something I’m missing (which also seems likely).

12. How will Augusta National look in November?

The azaleas will be gone, so what will be in their place to make for a dramatic HDTV Amen Corner backdrop? I’m picturing autumnal vibes with a mix of yellows, oranges, reds — and a full slate of fall flowers: Chrysanthemums. Aster. Marigolds?! Even these three types of flowers required a fair amount of fact-checking, so I’ll stop there. But florists with ideas for Augusta, hit me up!

13. Will Jim Nantz be calling NFL games from Butler Cabin?

The problem with a November Masters Sunday is that it runs in direct conflict with CBS’ typical fall Sunday plans. Could we see Jim Nantz and Tony Romo, cozied up in front of a monitor in Butler Cabin on Sunday morning, calling a Jaguars-Colts game happening in London? How CBS will handle college football on Saturday and NFL football on Sunday is an open question. But I expect we’ll see more Georgia Bulldogs gear than usual, especially if they beat the Vols on Saturday.

14. Will Roger Goodell attend the Masters?

Goodell looks good in his green jacket, but will he feel like a sports traitor if the NFL commissioner skips out on a football Sunday to attend a golf tournament? Here’s betting we’ll see Roger early in the week — but perhaps not at the members dinner on Sunday.

15. How will they figure out who qualifies for which Masters?

Wait a minute — I’m getting word this may actually be a question that has an answer! Golf Channel’s Will Gray is reporting that the Masters field has basically been frozen, as if it were happening this week. That means tournament winners from here on out would qualify as normal for the 2021 Masters, while players who might drop out of the top 50 between now and then would still play in the fall Masters. Of course, more canceled tournaments means fewer winners would make it into next year’s field, which could be smaller than ever. Questions abound!

16. How will Augusta National play in November?

The sun sets at 5:25 p.m. on Nov. 15, which would be Masters Sunday. Compare that with 7:57 p.m. on the scheduled April Sunday — so we know we’ll be seeing some earlier tee times. How else will the course be different? The overseed should have fully taken by then, but will it be softer? Colder? Rory McIlroy was already worried about a morning chill. Some of these answers exist here.

17. Could we be looking at a Masters mega-quarantine?

Picture this: golf events get canceled, one by one, through September. With the Masters looming, golf follows the lead of the proposed MLB strategy and sends players and essential staff to quarantine in the cabins at Augusta National and the local Marriott for a month in advance of the tournament. They have no other outside contact. They then play the event in front of zero fans, captured by the bare-bones CBS crew.

18. Will any of this REALLY happen?

This is the big one, and it comes with an honest answer: I have no idea! But if even some of it can happen safely and responsibly, we’ll be excited when it arrives.