Tour Confidential Daily: How much will the suspension hurt Tiger’s chances?

GOLF.com conducts a weekly roundtable with its staff to break down the game’s hottest topics every Sunday evening. This week for the PGA Championship we are answering one burning question each night. Check back for the unfiltered opinions of our writers and editors and join the conversation by tweeting us @golf_com.

Tiger Woods was three under (with no bogeys) through eight holes on Friday at the PGA Championship before weather suspended his rhythm and the rest of the action. How much will the stop in play hurt his chances of continuing to climb up the leaderboard Saturday morning? (He’s three under overall, T23.)

Alan Shipnuck: This is a better outcome for Tiger than sitting around in the air-conditioned clubhouse for a few hours and then having to go out and play a handful of holes this evening — he coulda been stiff and creaky and ruined his round. Saturday morning he’ll have pure greens and the chance to warm up properly.

Sean Zak: I think with this guy, there’s always a visual difference between when he’s hanging on and grinding, and when he’s actually dialed in. It felt like he was getting dialed in today, and I would have expected him to finish around four or five under. That being said, I agree with Shipnuck, it’s better than jumping back out there for four or five holes in the evening. 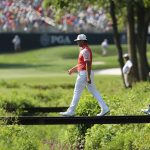 You may also like The odd couple: Polar opposites Woodland, Kisner in control of PGA Championship (and both ready to break through)

Alan Bastable: Don’t love the idea of him playing 46 holes in two days (and he probably doesn’t either), but he’s a world-class grinder. He won’t let it rattle him. Plus, that steamy weather should help keep his back oily. His glutes, too.

Jeff Ritter: Fair point on the creakiness, but the best scenario for Woods would’ve been no storm, and no weather delay at all. Friday was quite possibly the softest, most gettable setup in major championship history. Hard to know if the elements will conspire to make it equally inviting on Saturday. (Although I suppose it’ll still be soft.)

Jessica Marksbury: Unfortunately, a lot. It’s a huge bummer to lose that in-the-zone momentum and nearly impossible to reclaim it when you’ve been interrupted. Can he still have a great back nine on Saturday? Sure. But I think we’ll all wonder what could have been if he were able to continue what he started this afternoon.

Michael Bamberger: I don’t imagine Tiger will be a factor in this great championship when the big trophy is heaved Sunday night — we hope! — but since you asked: long Saturdays on wet courses where others complain has always been good for him and should be again. To return to my first theme, the scores are low and going lower and you have to drive it in play (not his strength), stake it (is his strength), make the 10-footers (not his strength). I’m digging Tiger’s whole 2018 vibe, as player and man. But I don’t see him doing something amazing here.