The odd couple: Polar opposites Woodland, Kisner in control of PGA Championship (and both ready to break through)

ST. LOUIS — Gary Woodland and Kevin Kisner are very different personalities who play the game very differently, but they occupy the exact same spot in the golf firmament: the eh-list. They’re good players who need a breakthrough at a tournament like the PGA Championship to go to the next level. Through 36 holes at Bellerive both are in position for a life-altering victory – with rounds of 64-66 Woodland has the lead while Kisner (67-64) is one stroke back – but both are downplaying the enormity of the opportunity.

“I’m not going to get too caught up in it,” Kisner said in a South Carolina drawl thicker than Bellerive rough. “I think you guys [persnickety reporters] get more caught up in it more than we [the noble players] do. You play the best, you win. That’s about it.”

These two 34-year-olds with a combined five PGA Tour wins have taken different routes to the top of the leaderboard, whilst playing alongside each other over the first two rounds. Woodland is a 6-foot-1, 195-pound ball of muscle whom Zach Johnson describes as “scary long” off the tee. He has swung away with impunity, attacking the rain-softened layout and leaving short-irons into pin positions that on Friday were tucked and tricky.

Kisner is charitably listed at 5-10 and 165, but you can usually add a pound for the wad of chaw stuffed into his lower lip. He is among the most precise mid- and long-iron players in the game and wields a streaky putter that can quickly turn molten. He made a strong run at last month’s Open Championship on a baked old links and the short-hitting Kisner has now contended at the last two PGA Championships, both played on sun-scorched Southern courses with putting surfaces that have needed a lot of water to stay alive.

“The greens are receptive, so my four-iron stops as quick as [Woodland’s] seven-iron,” Kisner says. “If they were firm, I don’t think I would have a chance with the way the greens are situated and the places they’re putting the flags.”

The key for Woodland has been his work on and around the greens. He is the quintessential modern pro, with an army of specialists to fuss over different aspects of his game: Butch Harmon for the full swing, Pete Cowen for the wedges and now Phil Kenyon to babysit the putter.

Woodland and Kenyon, the putting whisperer to the stars, began working together at the Open, where Woodland was striking the ball beautifully but every night bitching and moaning about not making any putts. He was sharing a house with his agent, Mark (Dr. No) Steinberg, who got so tired of the complaining he rang up Kenyon and made an appointment for Woodland on Saturday of the Open, a highly unusual time to overhaul one’s putting stroke. But Woodland’s action is now less handsy and more consistent – during the first round he holed 153 feet worth of putts. On Friday not as many dropped but he remained sanguine.

“If I’m starting the ball on line and hitting solid putts, that’s the key for me,” Woodland said. “I’m not worried about the result as much anymore. … When I drive it in play, I’m playing a game a lot of guys aren’t playing out here, and that’s a huge advantage. Really the putting was the last piece. When I see putts go in, I’m a completely different player, especially with as aggressive as I’m playing right now.”

Neither of these characters lacks for confidence. Kisner carries himself like a multiple major championship winner, and to hear him tell it, such big-time wins are almost inevitable. “It’s golf, man, that’s all I’ve ever done,” he says. “I won everywhere I ever been. If I shoot the lowest score [here], I win.”

Woodland has the jock swagger of a guy who grew up dominating in team sports in his native Topeka, Kan. He was a standout shortstop who at 16 led his team to the NBC World Series title, hitting a grand slam in the semifinals to key a 5-4 victory. In high school hoops Woodland was an all-state shooting guard who carried his squad to two state championships.

Kansas offered him a golf scholarship, but Woodland chose to play basketball at Topeka’s Division II Washburn University. As a freshman he had his best game against Northwest Missouri State, scoring 21 second-half points in a barrage that included five straight 3-pointers. Later that year, in the national tournament, Woodland made the winning free throws with eight seconds left to defeat West Texas A&M. For the season he shot 32 percent from 3-point range and 87 percent from the line, but he was realistic enough to accept that basketball was not a viable career option. So in 2003, at the end of his freshman year, he transferred to Kansas and made golf his priority for the first time. He won four tournaments as a Jayhawk, and this has not gone unnoticed as he strolls the fairways here in enemy territory. 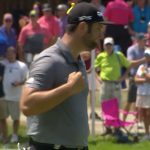 You may also like ‘There’s nobody telling me where the ball is’: Jon Rahm penalized for stepping on ball

“Good banter back and forth between the Kansas and Missouri fans,” Woodland says. “But the crowds are awesome. There’s a lot of energy out there, and it’s positive energy.”

Woodland estimates that up to a hundred of his people are in attendance, and he said the slow start to his first round was the result of trying too hard. For both him and Kisner going forward, the challenge will be metaphysical. At Carnoustie, Kisner came undone on Sunday, playing the first 12 holes in four over to tumble down the leaderboard. Woodland, for all of his prodigious physical gifts, has never had a single top 10 in a major, leading to him to concede earlier this year that he has underachieved in his career.

Zach Johnson has made a careful study of both players. What has held back Kisner in his recent near-misses in the majors?

“It’s gotta be something mentally,” Johnson says. “It’s just a matter of trusting what he’s got and continuing to do what he’s been doing, because what he has is really simple and really, really good. He’s got a great system for all aspects of the game. At this point it’s nothing other than trust.”

As for Woodland, Johnson says, “His short-game is really good. We all know how far he hits it. What I love most about G-Dub’s game is he has great rhythm. There is an ease to how he plays the game that is pretty rare.”

Trust. Rhythm. Belief. It is these ephemeral qualities that will decide the fate of Kisner and Woodland, two demonstrably good golfers who now have the chance to be so much more.