For the first time ever, the PGA Championship will be played on the Black Course at Bethpage State Park on Long Island. Considered one of the most difficult public courses around, Bethpage Black has hosted four professional tournaments in the last 20 years. It twice hosted the U.S. Open in 2002 and 2009, as well as The Barclays in 2012 and 2016.

Preparing for its first major since 2009, the Black Course underwent a number of course renovations over the last few years. Here are the main course changes that players and fans should expect to see at the PGA Championship, according to PGA of America Chief Championships Officer Kerry Haigh and Bethpage State Park Director of Agronomy Andy Wilson.

1. & 2. Re-grassing of the greens on holes Nos. 3 and 14: The greens were re-grassed due to agronomic challenges, according to Haigh. “The contours on hole 3 were not altered while the green shape on hole 14 were adjusted to modify the rear tier of the putting surface, and also add a front left area of the green to allow for additional hole locations,” Haigh said.

3. Expansion of the green on hole 11: The 11th green was modified in the back left to allow for additional hole locations and provide a greater variety of shot selection, according to Haigh. Wilson says the green on 11 now has about 500 to 600 more square feet and a back-left pin placement. “We can get a little more aggressive with the pin placements, so that will be cool,” Wilson said. 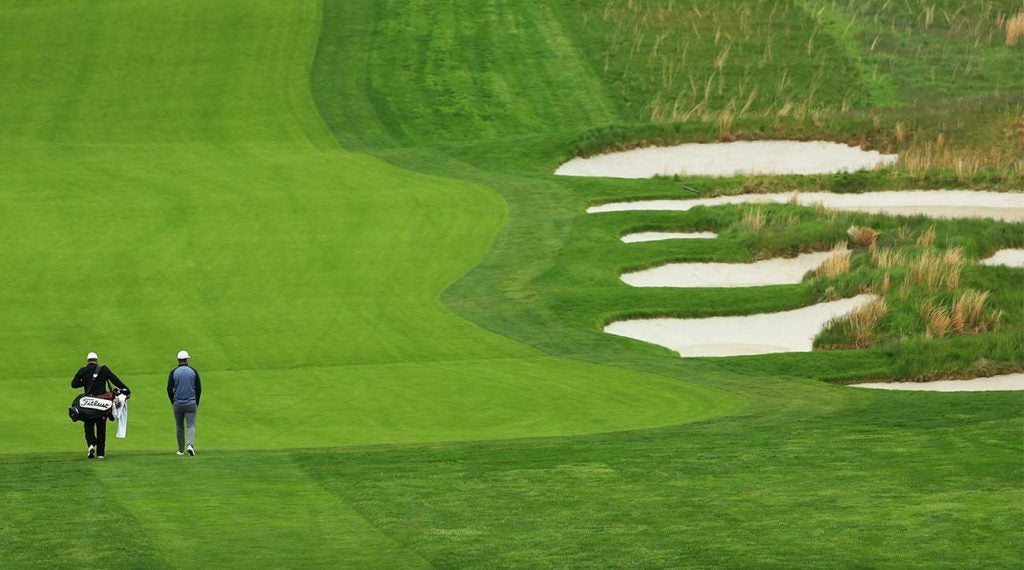 Two bunkers have been added to the right side of the 18th fairway prior to the 2019 PGA Championship.
Getty Images

5. Addition of two right-side fairway bunkers on hole 18:  Haigh says the bunkers were adjusted to provide players with more options from the tee or hit driver. “The fairway had a little bit of an hourglass shape, so the front of the fairway ballooned about 30 yards wide,” Wilson said. “So if someone really wanted to lay up, there wasn’t much danger there. Now if a player wants to lay up, there’s going to be a little more pressure on him to be accurate. If a player wants to go for it, there’s more reason to go for it now that the fairway is wider further down.”