The second major of the golf season is set to get underway, as the PGA Championship heads to Bethpage State Park on Long Island for the first time ever. It won’t be an easy one for the pros, as the tournament will be played on the extremely-difficult Black Course.

At the PGA of America, Haigh is the guy who knows more about Bethpage Black than almost anyone else. That being said, we reached out to get the inside scoop on what golfers, patrons, and fans watching can expect during the PGA Championship. 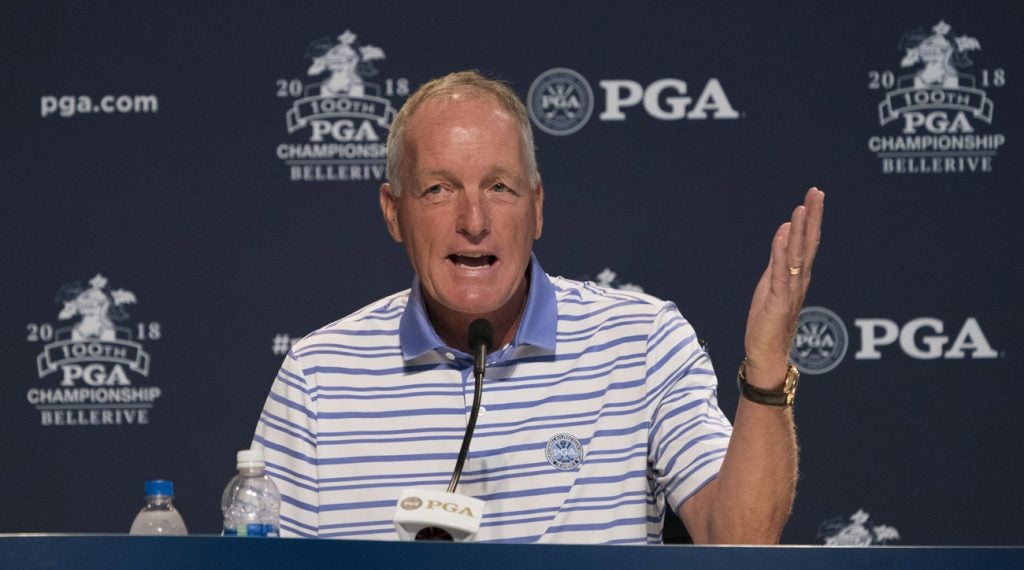 Kerry Haigh is the man in charge of running the show at the PGA Championship.
USA Today Sports

What hole(s) do you think will play as the most difficult at the PGA Championship?

There are a number of very difficult and challenging holes at Bethpage Black. We would anticipate holes 7, 10, 12 and 15 will all test the best players in the world.

How similar or different will the course play given that the event is now in May rather than August?

This is very dependent upon the weather conditions. It is likely that the course will play more difficult in May than it would have in August due to the fact that the health of the grasses is significantly better in May, i.e. the fairways, roughs and greens are all actively growing at that time of year whereas in August they are struggling to stay alive due to the heat and humidity. It is also more likely that we may have stronger winds and more moderate air temperatures which will also make it more challenging as well as more enjoyable to walk around for both players, caddies and spectators.

How big of an impact will that have on the tournament and course? Is it beneficial to golfers and the course that it’s earlier on the calendar?

There will certainly be less wear and tear on the course with the Championship being played in May versus August. Bethpage is one of the very best public golf courses in the world and as a result it attracts lots of golfers. We are excited to be able to play our PGA Championship on a true public golf course that is open to everyone.

What renovations have been done to the course to get it ready for the PGA Championship?

The only significant changes to the golf course since the U.S. Open are as follows: the greens on holes No. 3 and No. 14 were re-grassed due to some agronomic challenges they faced. The contours on hole 3 were not altered while the green shape on hole 14 were adjusted to modify the rear tier of the putting surface and also add a front left area of the green to allow for additional hole locations. The green on hole 11 was modified in the back left to allow for additional hole locations and provide a greater variety of shot selection and hole locations for the week of the Championship. The fairway contours on hole 18 were modified and the bunkers adjusted to allow players to have more options from the tee to hit a driver or less club at their choice/risk.