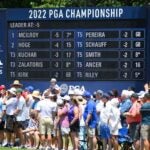 The drama is just getting started at Southern Hills.

Welcome to “Seen & Heard at Southern Hills,” a daily compilation of insights and observations from our PGA Championship coverage team that is available exclusively to InsideGOLF members. Check this space daily — or your inbox, where we’ll also be sharing these dispatches to members in newsletter form — for inside scoops on the year’s second major championship.

With an opening-round 65 that leads the PGA Championship, Rory McIlroy was the standout of the star-studded grouping that included Tiger Woods (74) and Jordan Spieth (72).

Woods started out hot. He had it at two under through the first five holes before he hit the first of several road bumps. Sweating heavily in the Oklahoma heat and laboring after torquey shots, Woods never really looked comfortable after a bogey on the 15th, his sixth hole.

Spieth came into Tulsa with momentum. He seemed to have found something with his pre-shot routine, but he admitted that his quest to shallow out his swing cost some putting practice — and on Thursday it showed.

McIlroy isn’t known for his fast starts in majors, but that wasn’t the case on Thursday. With his driver leading the way, he made four straight birdies on his opening nine and never looked back. Needing only 25 putts didn’t hurt, either.

One thing that really stuck out was the way McIlroy managed to keep the sweat off his hands. Seriously. With the bottlenecks at Southern Hills, players had to endure lengthy waits on some tee boxes. McIlroy often gripped his towel to keep his hands dry. When he wasn’t doing that, he was waving his hands to keep them cool, almost as if he had just washed them and the paper-towel dispenser was empty.

Now, did this play a huge part in his success? Probably not. But it proves that in Round 1, McIlroy did almost everything right.

Finally, we are done talking about odds and over-priced beers. On Thursday when balls go into the air, none of that other stuff really matters.

After all, this is PGA Championship week, one of the four majors of the year, and anything can happen. John Daly — John Daly! — was in the mix early on. He’s riding in a cart this week and still a fan favorite. The 56-year-old former PGA champ was two under after 10 holes on Thursday and made par on the next three to stay on the first page of the leaderboard. John Daly!

But he bogeyed four of the last five, including the last three, to shoot 72.

Yet Daly wasn’t even the best golfer in his group. That honor belonged to 50-year-old Y.E. Yang, of 2009 Hazeltine fame, who shot two under on the front and was one under with two to play before back-to-back bogeys led to a one-over 71. (That pesky 18th, everyone bogeyed it on Thursday.)

Guys like Brooks Koepka and Patrick Cantlay and even Tiger Woods struggled out there, but Daly and Yang? They took advantage of favorable morning conditions. Neither of them will win this PGA Championship, you could probably agree, but it’s proof that when the pre-tournament chatter ends and it’s time to hit the ball, it’s anyone’s game.

A common theme among rookie golf fans telling tales of their first in-person professional golf tournament is harping on the sound the golf ball makes coming off the clubface.

It just sounds different when they hit the ball.

And it’s true! The ball does make a different sound when a pro puts a move on it, and it’s an enlightening discovery the first time you hear it.

But there are some pros who are in a league of their own. And when they hit the ball, it sounds different from their peers.

Enter Will Zalatoris. Watching the lanky Texan smash balls on the range, I had flashbacks to the first time I heard that sound. The sound his ball makes is just different compared to his contemporaries.

The next time you watch Zalatoris play, I’d encourage you to listen for the sound. It’s a subtle difference compared to other pros, but once you recognize it, it sounds like a sweet, sweet symphony.