Masters weather: The weekend forecast for Augusta National is terrible

UPDATED (Friday, April 12, 9:30 p.m. ET): Outside of a brief suspension in play due to lightning late in the afternoon, Friday’s weather turned out to be beautiful for both golfers and fans. The early rain showers went away, and second round play was able to proceed.

However, the weather forecast isn’t supposed to be any better for the weekend at Augusta National.

Rain and scattered thunderstorms are still expected throughout the morning during Saturday’s third round. Temperatures could reach as high as 87 degrees on Saturday, according to the Weather Channel. A low of 68 degrees is forecasted as well for Saturday.

The rain is expected to dissipate later on, as cloudy skies will remain throughout the rest of the day. However, scattered showers and thunderstorms are forecasted to return on Saturday night after play is completed.

So it’s safe to say that both fans and players should be ready for bad weather and suspended play this weekend at the Masters.

Players and patrons alike enjoyed a picture-perfect sunny day for Thursday’s opening round of the Masters. But the Masters weather is about to change quickly and dramatically. Rain and thunderstorms are expected to wreak havoc at Augusta National on Friday, Saturday and Sunday.

First up is Friday’s second round. Despite an early forecast calling for scattered thunderstorms, the rain had already started to fall at Augusta Friday morning before anyone teed off. And the forecast is getting worse and worse.

The high temperature for Friday is 85 degrees, with a low of 65, and rain and thunder are expected throughout the day, especially late in afternoon, as you can see below via Weather.com. That’s bad news for Tiger Woods, who tees off in the second-to-last group at 1:49 p.m. ET. 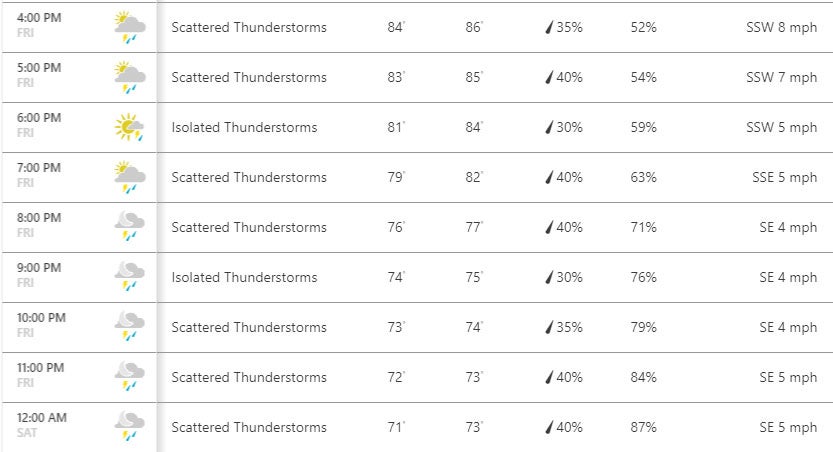 The hourly forecast for Friday at the Masters, via. Weather.com
Weather.com

The Masters weather forecast doesn’t get any better for Saturday. Rain and scattered thunderstorms are expected throughout the morning during the second round. Late storms Friday and early storms on Saturday are a bad combination for a golf tournament, especially one as important as the Masters. 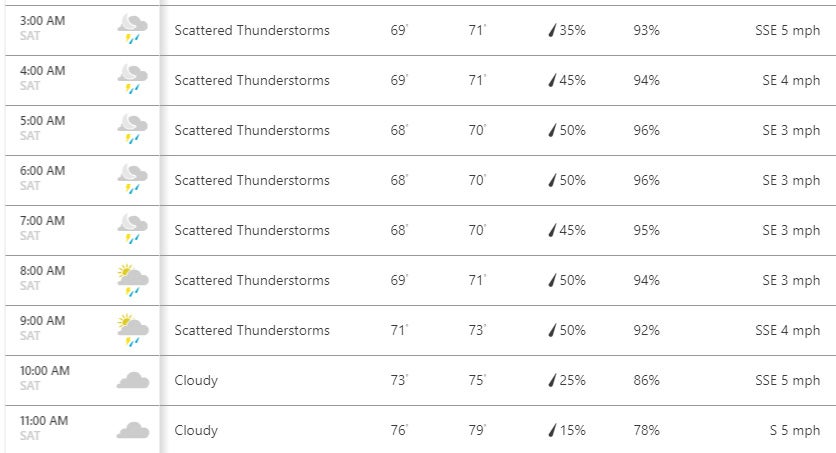 The hourly forecast for Saturday at the Masters, via. Weather.com
Weather.com

But the golf gods are definitely saving the worst for the final round. On Sunday, the players could experience the worst Masters weather in a long time. While it’s a little early to trust exact predictions for Sunday’s weather, right now the forecast calls for thunderstorms all day.

But that won’t be the only weather problem the pros will have to contend with. The wind is supposed to pick up significantly for the first time all week, averaging 16 mph.

Tournaments
As the Masters continues to draw back the curtain, its fabled mystique has suffered

If all of these Masters weather forecasts prove to be true, rain and thunderstorms will have a big effect on Augusta National and the players’ scorecards. The real question now is if the weather will be bad enough to suspend play and prevent any of the remaining rounds from being completed.

Earlier in the week, lightning forced the tournament officials to shut down the course twice. And bad Masters weather is not all that uncommon. In 2014, almost the entire first round was washed out due to rain. In addition, there have been a total of five Monday finishes in Masters history, the most recent happening in 1983.