Lessons from Augusta: Tiger shines, an editor’s pro tips, a Masters rookie gets lucky and more

The 83rd Masters will long be remembered for Tiger Woods’ epic 15th major title, but so much more happened on the grounds of Augusta National Golf Club that week. Here, our staff reflects on their most memorable moments in our Lessons from Augusta.

1. If you find yourself at a golf tournament ft. Tiger Woods, carve out some time to observe him in the short-game area, as I did Saturday morning at Augusta National. The precision and apparent effortlessness (of course, it’s anything but effortless) with which Woods hit chips, lobs and bunker blasts is mesmerizing — soothing even. You can watch him pound balls on the range, but the short shots will give you a better appreciation for his magnificence.

2. If you’re debating the most thrilling shot in golf with your bros, it’s not a debate. The correct answer is the going-for-the-green second shot at Fire Thorn, Augusta’s sublime par-5 15th. Balls launched from the crest of the fairway hang in the air for an eternity. Late on Masters Sunday, there’s more drama in those 3-5 seconds than there is in an entire season of The Bachelor. The nerviest shot in golf is also not a debate: it’s a wedge shot into 15.

3. If you cross a gallery guard at Augusta National…just don’t. Trust me on this.

4. If you watch 2003 Masters champion Mike Weir hit balls on the range, you’ll better understand why his game has been in the wilderness for all these years. With alignment rods at his feet and a water bottle next to his ball (to keep his path on track), he’ll spend a couple of minutes between shots running his swing through a battery of check points. Stance? OK. Grip? Good. Takeaway? Hmm, let’s try that again. Takeaway? Yes, better. In the space of about 10 minutes on the ANGC range, I watched him hit all of five balls.

5. If you cover a Masters as a journalist, you can buy your friends, family and kids shirts, flags, teddy bears, ball markers or $145 lithographs of the 13th hole. But they’ll most appreciate the scrumptious press-building snacks. — Alan Bastable 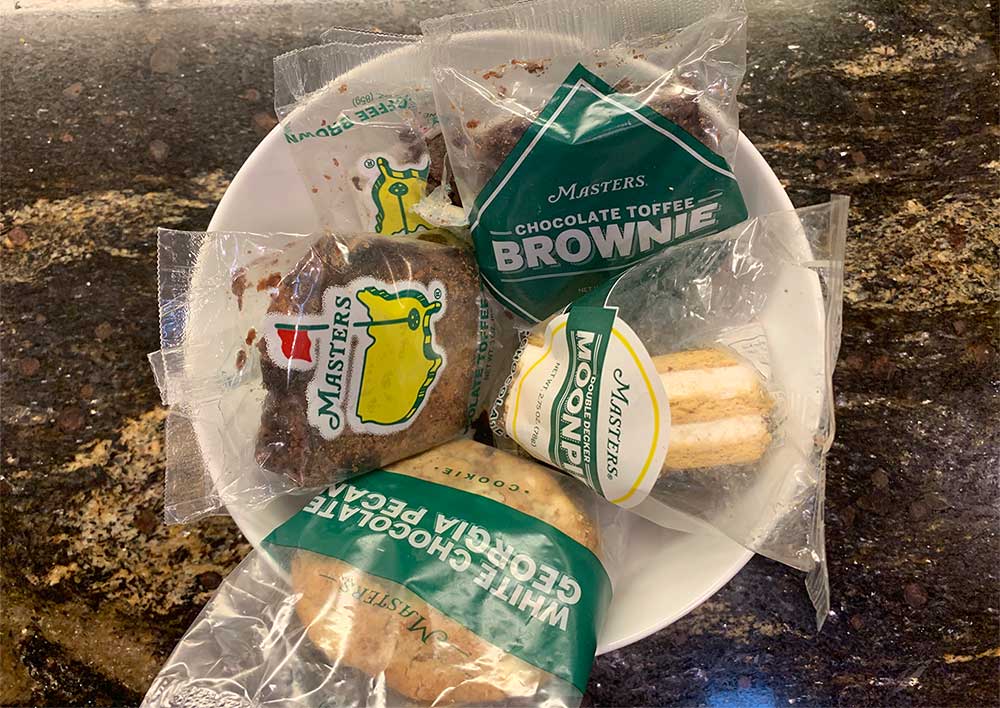 The snacks in the Masters media center? The best.

It can be dispiriting trying to tell the stories of the modern PGA Tour player. To be granted even a sliver of time often requires running through a gauntlet of agents, publicists and other obstructionists. Going straight to the player can be equally unsatisfying. After months of getting blown off by handlers, I recently approached a fellow in the top 10 of the World Ranking about doing a big Golf Magazine cover story. “I’m trying to understand what’s in it for me,” he said. “I have [redacted] Instagram followers and that number is growing every day. I can build my brand on my own.” Okay, but don’t golf fans deserve rich, nuanced, in-depth stories, and not just shallow and silly social media posts?

I brought this ennui with me to the Masters, traditionally the hardest week of the year for reporters to do their job due to the draconian rules of the green coats. But then all heaven broke loose. Ben Crenshaw ambled into the press building, exuding warmth and good cheer. I had set up some podcast gear on the veranda but it took us 20 minutes to make a 100-yard walk, as Gentle stopped to schmooze with his many friends among the scribes. Then we sat down and chatted for 45 minutes. Crenshaw was funny and unguarded as he spun yarn after yarn. Afterward he thanked me for my time. Shortly thereafter Jack Nicklaus his ownself arrived, having previously agreed to a 90-minute sitdown interview. (These days, the standard offer from a B-list player’s agent is one hour for a feature…and that includes the photo shoot.) Big Jack had already had a long day, having awakened before dawn for the ceremonial opening tee shots. But over an hour and a half he was alert and engaged. He told great stories and offered heartfelt thoughts on a wide variety of topics. When the allotted time was up the great man lingered for another half hour, enjoying the televised golf and a wide variety of snacks. It was as if he had all the time in the world and was happy to share it.

Why do golf fans love Nicklaus and Crenshaw so much? Their on-course heroics are only part of it. They have given us so much more. They have always let us into their hearts and minds, one conversation at a time. That is how you build an enduring brand. — Alan Shipnuck 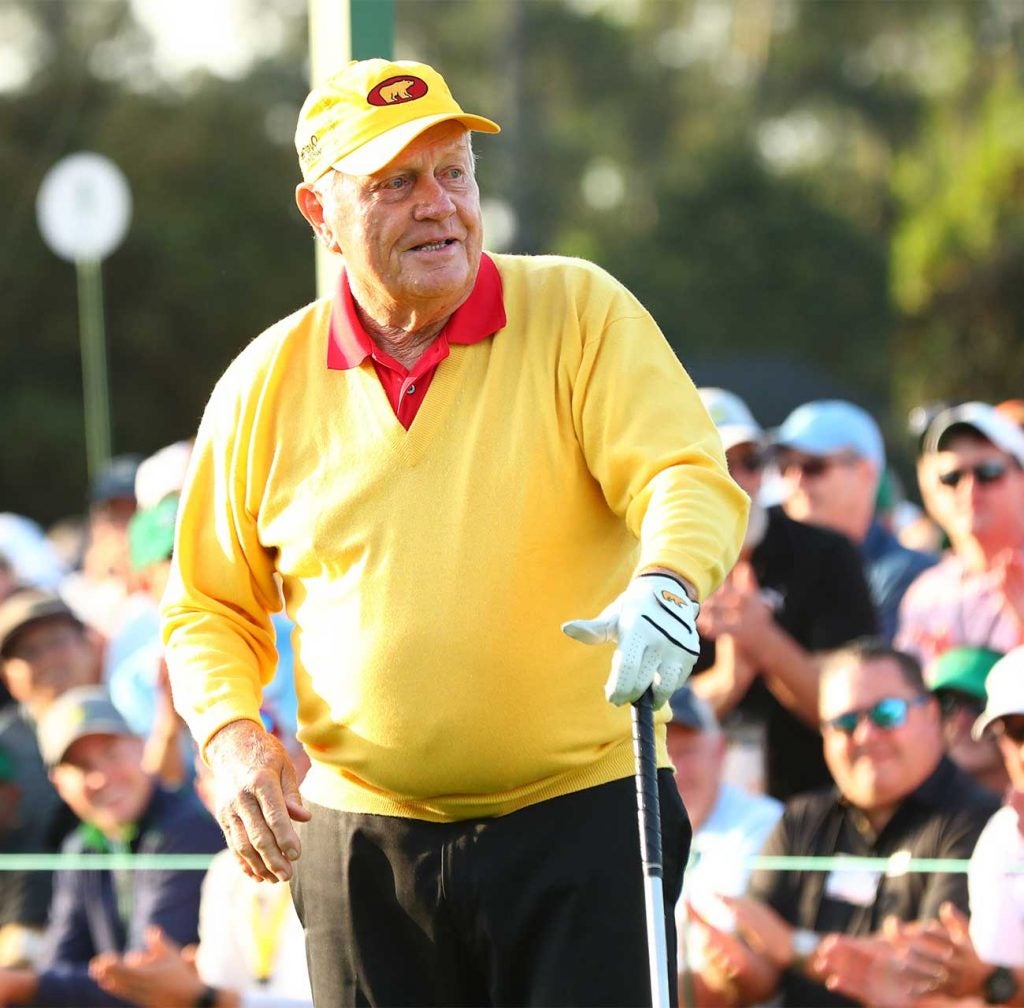 Jack Nicklaus and Gary Player officially kicked off the Masters with their tee shots on Thursday morning.
USA Today

Just after 10 a.m. on Masters Thursday, Rory McIlroy and Tiger Woods stood just feet from each other as they splashed balls out of the sand from the Augusta National practice area. McIlroy was in there first. Woods followed, saying something to McIlroy as he entered that made both laugh. Then they got to work. They didn’t look behind them, but they would have appreciated it. It was just two days earlier that McIlroy and Woods sat in the media center and discussed how much they loved the Masters’ trademark no-phone policy.

On Thursday, hundreds of patrons not more than 20 feet away were zeroed in on the 18-time major champions. No phones, just fixed gazes on two of the game’s best. Little was said save for the oohs and aahs and occasional one-liners.

Some cringed when Woods hit one thin. More clapped when he clanked one off the pin and in. One man put his arm around his wife. “You enjoying this?” he asked. “This is great!”

Woods exited the bunker without saying a word and headed off to the range. The majority of the crowd turned and went with him. They looked ahead, not down. — Josh Berhow 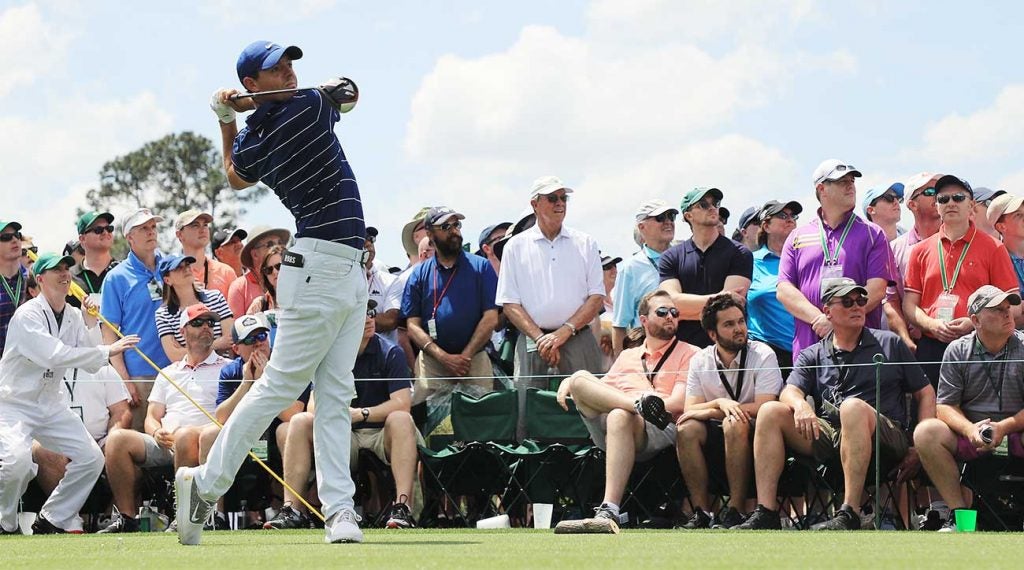 Masters patrons watched Rory McIlroy (and others) with their own eyes and not through their phones.
Getty Images

Turning back the clock (and wardrobe)

It’s common practice for golf’s many clothing manufacturers to send their respective players’ “scripting” to the media during the week before a major championship. Sometimes a limited-edition item is included, but the announcements are generally used as a way to publicize the latest and greatest apparel styles and technology on offer. They’re easy to overlook — or at least they were until this year’s Masters, when one particular player had looks that stood out from the rest: Tiger Woods.

Nike’s scripting for Tiger was basically a throwback homage to his mid-2000s dominance, and called for the Big Cat to don a TW Vapor Mock polo on each tournament day at Augusta. Though Nike had no way of knowing what would transpire last week, it was certainly a bold move. Why? Because the clothes we wear tacitly communicate so much to those around us. With these ensembles, Tiger was basically saying, “Look at me. I’m the man.” He oozed alpha vibes. Wearing those mocks while everyone else was dressed alike in polos was a pure power play. I mean, did you SEE him at Augusta? He looked like a super hero, while everyone else just looked like … themselves.

Tiger’s self-belief is legendary, but his hyper-athleticism and Sunday red are also integral cogs in the Tiger Effect machine. Did Tiger’s mocks help him win the Masters? Probably not. But one thing’s for sure: if there’s any truth to the idea that when you look good, you play good, we may be in for a very exciting major season indeed. — Jessica Marksbury 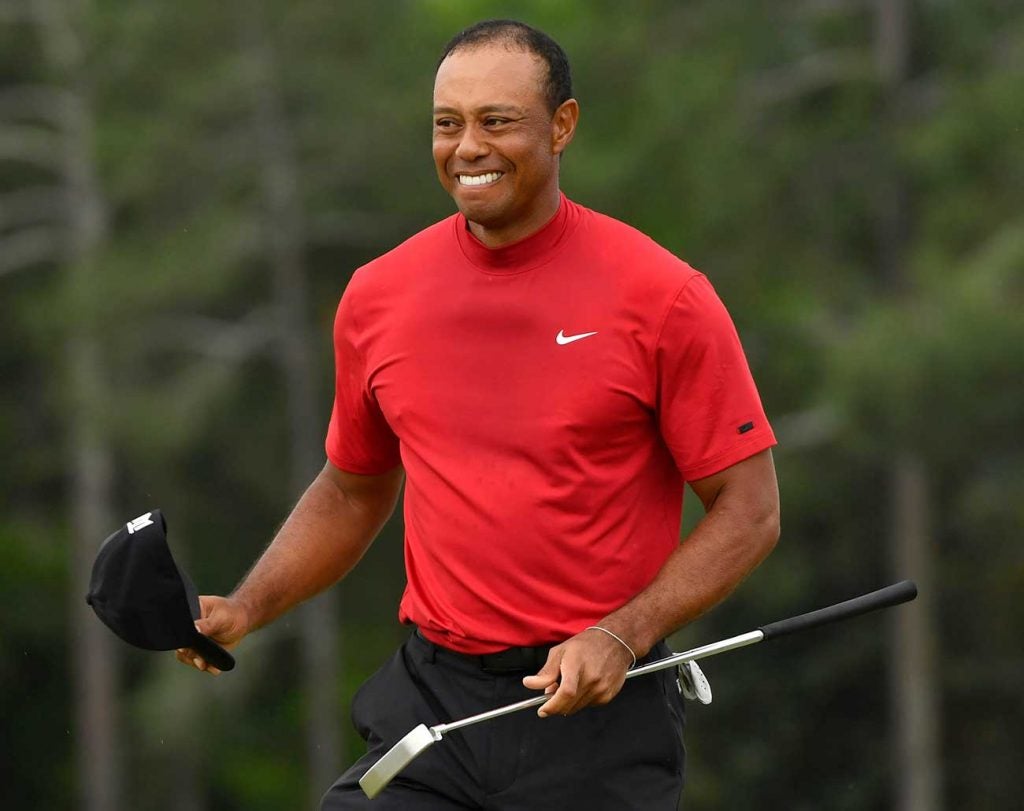 Rookie moves at the Masters

Being that this was my first trip to the Masters, I did a lot of first-timer things. I chipped away each day at Augusta National’s “must-see” sights, and as Sunday rolled around I had one thing left on my list: a picture at Founders Circle. It’s an iconic shot for golf fans.

Yes, it’s cliche and probably cheesy, but again, it’s my first time! For all I know this could be my last. So, I made my way bright and early to find that the line was way more manageable than I had come across days prior. We’ll call it a perk of the weather-adjusted schedule. I got the shot! But little did I know this would lead me to some exclusive time with Tiger.

On my way back to the media center, I made a right off the clubhouse and suddenly found myself 10 feet away from Tiger and his caddie proceeding to their warmup from the locker room. It was just Tiger, Joe LaCava, a security guard and myself on a peaceful two-minute stroll before they arrived at a cart waiting for them. It was surreal to observe Tiger march with such focus without crowds or roars to interfere. Given that Tiger went on to win his fifth Masters, I’ll never forget it.

Sometimes doing the touristy stuff is worth it after all. — Tim Reilly 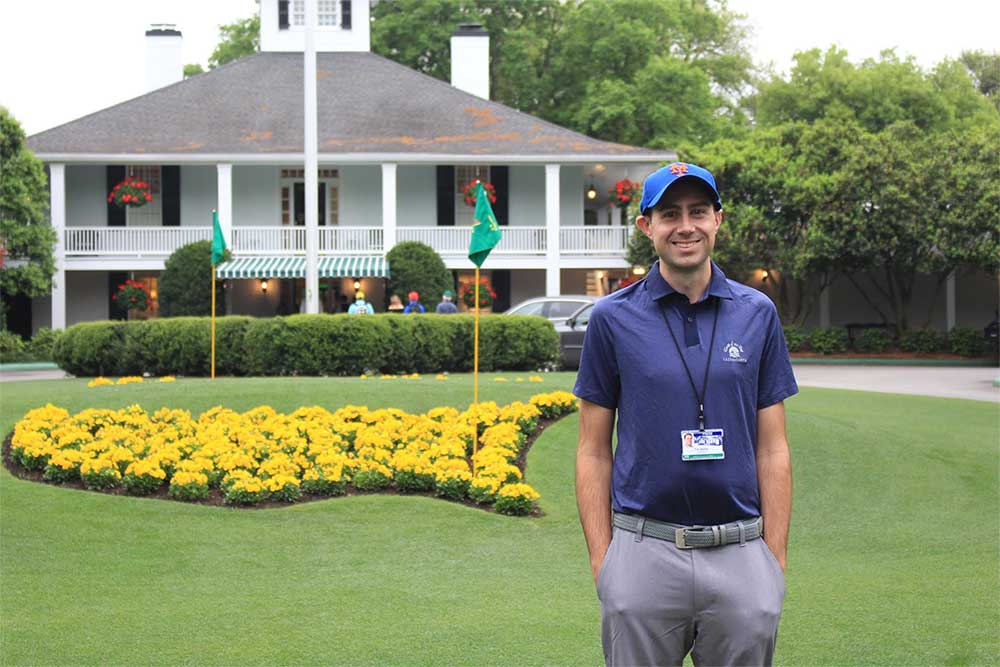