The last question of Tiger Woods’ 2019 Masters winning press conference was a doozy: Could he go through every approach shot he hit that day, club by club? Woods had no trouble with the recall; one thing that hasn’t changed is his sharp mind. But he answered the same question in 1997, during his first win. The differences in clubs tell us something about Tiger Woods — and Augusta National.

The 6,925-yard Augusta National has been traded out in favor of a 7,475 alternative. In the lead-up to this year’s event, Woods broke down the differences in the course. Let’s go through, hole-by-hole, to check out the contrasts and see what they tell us.

The issue for Woods has been finding this fairway, no matter how long it is. No problem on Sunday; he striped it. 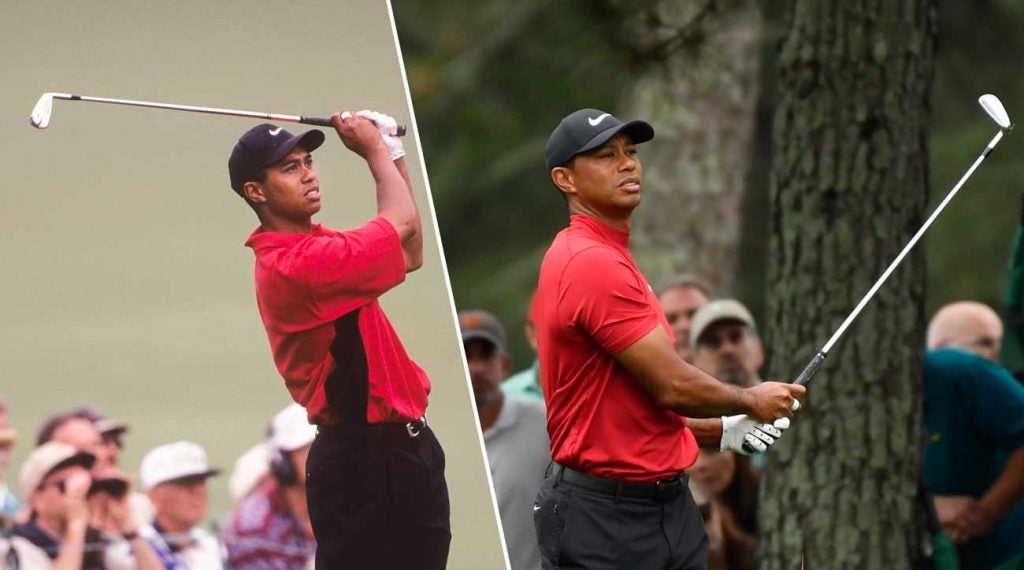 This year’s veteran version laid back off the tee — and made birdie. ’97 Tiger hit it up by the green but settled for par. Go figure.

This hole’s gotten much longer. That’s no Erin Hills 495; this is the real deal.

Finally, a hole that hasn’t changed — but a club that has.

Talk about a contrast. Back in the day, pros with short irons could eat up No. 7, just like the women in the ANWA did this year. Now it’s a tougher driving hole and a significantly tougher test with a mid-iron in hand.

In fairness to Woods, he nearly hit iron in this year before switching to 5-wood, which he promptly pounded some 30 yards over the green. Nice up-and-down, though.

“I remember Raymond [Floyd] telling me just on 9, just hit it as far right as you possibly can,” Woods said before the Masters this year. “Well, you can’t do that anymore, there’s a forest down the right.”

As for his approach, maybe he should have hit 9-iron on Sunday instead of tugging 8 to the back edge. Then again, that would have deprived us of the spectacular lag putt that followed.

Take note of that ’97 8-iron: It was the only club longer than a pitching wedge that Woods hit into a par-4 on Sunday.

Take note of that 8-iron: It was the only non-wedge that Woods hit into a par-4.

I defy you to stand on that new back tee at No. 11 and feel anything but fear. Woods’ take: “On 11 you used to try to hit the ball up against the gallery. Well, now there is literally a forest that is there. The fairway used to be 80 yards wide, that’s no longer the case.”

They didn’t need to change this hole; it’s nearly perfect. Note that Francesco Molinari hit 8-iron right before Woods and splashed it in the front water; Woods hit 9 anyway.

Finally, new Tiger catches up with that 8-iron! Both led to birdie, too. Only time and technology will tell what this hole becomes.

By my count, Woods was 44th in driving distance at this year’s Masters. In 1997, he led the field by some 25 yards. This was a different brand of victory, to be sure.

News
Masters 2019: 3 of Tiger Woods’s winning shots and how he hit them

Yes, that’s pitching wedge into a par-5. That’s the sort of thing Tiger Woods used to do all the time. But this year’s 5-iron from 227 was pretty special all the same.

Woods asked LaCava if he should hit a cut 7-iron at No. 16. LaCava knew he shouldn’t. Eight was the right club, he said. He was right.

Probably still the most forgotten hole at Augusta given where it sits on the back nine. Goes without saying it’d be easier to have sand wedge left in.