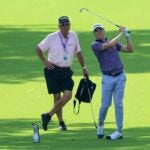 Justin Thomas is in contention at the PGA Championship.

TULSA, Okla. — On Thursday, Justin Thomas took it to Southern Hills. He played in the day’s toughest conditions, battled wind and firm greens and birdied his final hole — No. 18, the toughest on the course — to post an opening round of three-under 67. This has become a recent hallmark of Thomas’ game: low rounds in brutal conditions.

“I think it’s because I focus a lot more on what I’m trying to do in terms of the shot I’m trying to hit, the trajectory, the distance, and think less about golf swing,” he said post-round.

What’s interesting is that Thomas’ stellar round came after days of poor practice.

“I think I really wasn’t pleased with how my range sessions have gone this week and just how I’ve felt over the ball, and I got a little frustrated yesterday with my dad,” he said.

That’s where things get interesting, because Justin’s father Mike doubles as his swing coach. If you watch much PGA Tour golf, you likely already knew that, because when you see Justin, you often see Mike, too. That’s doubly true at this week’s PGA Championship, given Justin is a former winner and Mike is a PGA pro. This tournament is an homage to the family business.

Theirs isn’t a completely unique relationship — Xander Schauffele’s father Stefan serves as his coach, too, as do the Tour dads of others like Corey Conners and Cameron Young — but it certainly blends the lines between work and family. When Justin is in proper form, it’s all good. But when he needs a shove in the right direction, the line between father and coach gets more precarious.

“It’s a lot different,” Thomas acknowledged of their relationship. “I get pissed at him sometimes, and I think as a dad he doesn’t want to — he’s not going to go full Butch Harmon or Pete Cowan and tell me I suck or ‘that’s not very good’ or whatever it is, and sometimes I would love for him to say that just because I want to hear it.”

In other words, Thomas doesn’t want his dad to take it easy on him. He wants the same tough love that other legendary coaches give their respective pros.

“I mean, I have to remind him sometimes, you’re not my dad out here, you’re my swing coach, and I need you to tell me if something is wrong. I don’t need my ego boosted. I’m here to try to win a golf tournament and play well, so do your job kind of thing.

“It’s gotten a lot better over the last couple years, but it’s like any player-coach relationship. You need that accountability, I think.”

In the midst of that frustrating range session, what Justin needed was a hard reset. That’s where Mike came in.

“He was like, well, let’s just start trying to hit some shots, like put a stick out, like let’s hit some fades, hit some draws,” Justin said. It worked. “Then immediately just started flushing it and hitting it how I wanted.”

There’s the irony of golf coaching: Sometimes the best swing thought is not to have one. Thomas’ PGA performance is a testament to that style of play.

“When you get out there, it’s game time, and it’s time to just try to get it in the hole as soon as you can,” he said.