Golf fans won’t know for quite some time just which version of Jordan Spieth to expect on the golf course in 2019. But off the course, it’s already clear: he plans to speak freely. On Wednesday, Spieth openly admitted that the Sony Open, his first tournament of the new year, was a bit of a test run. After he struggled to a three-over 73 on Thursday at Waialae Country Club, he admitted that things didn’t feel quite right. 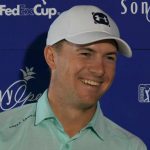 “Like, I’m over the ball and I’m uncomfortable,” Spieth said. “It’s going to happen in the course of a career. As long as I don’t let it get to me like I did a little bit last year, I’ll be able to get back on track sooner rather than later.”

The 25-year-old newlywed made just one birdie against four bogeys and never got anything going during his morning round, which he played alongside Bryson DeChambeau and Gary Woodland. He hit seven of 14 fairways and just nine of 18 greens and sits T127.

Spieth’s putter, which was his calling card for several years on Tour, has come under heavy scrutiny after a lackluster 2018 on the greens. Swing coach Hank Haney went as far as to say Spieth “visibly has the yips” in advance of the tournament. But despite finishing Thursday 136th out of 144 in Strokes Gained: Putting, Spieth actually said he felt better on the greens than he did with his full swing.

“I mean, I felt comfortable with the putter today,” he said. “Didn’t end up making anything, but felt like I hit my lines; felt comfortable. That’s closer than the swing is. It’s not to where I’m just over it and playing shots or over it and seeing lines and hitting putts. It’ll get there. I’m not worried about it.”

Nor should he be, just a single round into his 2019 campaign. Spieth, who is 12 shots off Adam Svensson’s lead, mentioned a desire to shoot five or six under and make a leaderboard charge. But even if he doesn’t, he’s taking a long view.

“I got pretty far off and I’m trying to backtrack significantly. But I need to get some tournament rounds to do it, even though it’s humbling at the same time.”