He knows you’ve been asking the question. He also thinks he has the answer. What’s wrong with Jordan Spieth?

Golf’s Golden Boy finished 2017 at No. 2 in the world, but he slid to No. 17 by the end of 2018. It was the first year on Tour he didn’t win an event, and he only notched one top 10 after the Masters. But this week, he begins a fresh 2019 campaign at the Sony Open. A reporter asked him at Wednesday’s pre-tournament press conference whether he’d noticed a loss of confidence from the public and the media, and Spieth had plenty to say in a thoughtful response.

“That’s nothing new. People lost confidence in me in 2016. I mean, I still won twice. I should have won another major that year,” he said, referring to the back-nine lead he gave up at that year’s Masters. “The thing for us is not to get caught up in today’s news. It’s easy to sometimes when you’re not used to it. I haven’t seen, read, or heard anything on it. I learned that lesson already because I know what’s wrong with Jordan Spieth, and I know what’s right with Jordan Spieth.”

What’s “wrong” with Spieth? He went on to give a few examples:

He’s been too dependent on his coach. “I think especially over the last year or so I’ve probably been too reliant and communicative and not figuring it out on my own,” he said.

He’s been inconsistent. “Last year I was really off with the putting the first half of the year; that started to get better and then the swing got off,” he said. “So just having tournaments where I shoot four under every round instead of two over, seven under, even. Instead of all of that bouncing back and forth, just some more consistency.”

He didn’t know what he was doing wrong. “It was also something I kind of embraced as an inevitable at some point in the career,” he said. “I almost took ignorance as bliss in a lot of parts of my game. I did things well, but I didn’t know why. I just did them. Then they got off, and so I had to figure out why I did them well and how to train it back.” 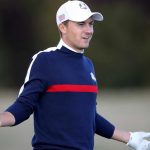 There’s plenty “right” with Spieth, too, he said.

He’s more mature. “I know how to get where I want to go with my golf game and have fun doing it,” he said. “I think it’s taken a bit of maturing to do that. Like, I kind of get credited with being mature from when I got out here, but in reality there was quite a bit of maturing to do as far as what you pay attention to, how other people’s opinion affects you and that kind of stuff. I think I do a better job of that now.”

Of course, we have to take Spieth at his word for each of these, both good and bad. If he really knows the wrongs, they can become the rights. And with each of the rights he included a fair amount of uncertainty. The proof, as always, will be in the golf — and that starts Thursday morning in Hawaii.