The Waste Management Phoenix Open has made a name for itself as the wildest, most raucous party on the Tour schedule. It attracts fans not just by the thousands, but by the hundreds of thousands. While noise is not only tolerated, but often welcomed within the confines of the 16th hole’s par 3 stadium setting, it is in fact frowned upon elsewhere.

Unfortunately, that doesn’t stop some fans from ensuring their voices are heard — even at the most inappropriate times.

Rickie Fowler and Jordan Spieth are two of the most popular and well-liked players in the field this week. But when Fowler missed the green on No. 16 on Thursday, the fans didn’t hold back.

“I was a little disappointed in some of the stuff that was said,” Fowler said after his round of 66 on Thursday.

For Jordan Spieth, the heckling also began during Thursday’s first round. In the middle of his downswing on his final hole, the par-4 18th, a female fan yelled, “Tater tots!” Jordan found the fairway and the fan was removed, but Spieth did not to speak to the media after posting a disappointing 72. 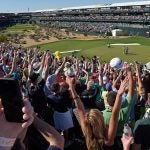 You may also like Extraordinary? Please. The raucous, obnoxious 16th hole at TPC Scottsdale actually makes the game more ordinary

“That girl just yelled right in Jordan’s downswing,” Thomas said. “There’s just no place for that.”

On Friday, Spieth found himself battling to make the cut. Facing a long birdie putt to get inside the cut line, Spieth took the putter back, and, as reported by Golfweek, a male fan yelled, “I have 100 bucks on you, Jordan!”

Needless to say, Spieth missed the putt as well as a chance to hang around for the weekend — his first missed cut in over eight months.