A ho-hum Wednesday morning activity is to examine a scorecard via the Al Gore invention we all take for granted here, latish in the first quarter of this 21st century. I am now looking at a gray-and-beige scorecard for the Stadium Course at TPC Scottsdale. The course was designed by Tom Weiskopf and Jay Morrish and each hole has four sets of tees, Forward, Resort, Players and Championship. The course has four par-3 holes, the last of them its 16th, which, according to the card, ranges in length from 98 yards to 163. The handicap ranking for men shows it to be the second easiest hole on the course. It couldn’t sound more ordinary, a chance for the resort guest to make a late-round par and think about coming back. And that is surely what it is 51 weeks a year.

This is the other week. This is the week when that hole represents the ongoing attempt to degrade ye olde game.

Maybe we should be asking, as we did on Tour Confidential the other day, if the party that is that hole this week is enough? Why don’t we have the fellas, when they get to the 16th hole on Sunday for the Waste Management Open, in the hours leading up to The Big Game, play to a hole that is not the perfect circle it normally is, measuring 4.25 inches in diameter. Why not reconfigure it in the shape of a clown’s nose? Why not require the players to use rubber-coated balls in various fluorescent colors? Aces could be rewarded with free rounds, not just for the player but his entire family.

It has become fashionable, over the past 20 years or so, to say of the raucous atmosphere surrounding the 16th hole of the old Phoenix Open that you wouldn’t want to see something like it every week but that one time a year it’s good or fine or whatever. I think it’s awful. Maybe I’m looking at it all wrong. For starters, I don’t believe that the golf played on the PGA Tour is an “entertainment product,” even though it is sometimes highly entertaining. I feel the Tour — the actual weekly series of golf events — is a year-long athletic competition that serves to identify the best players in the game. It should be (and typically is) us looking at them. Number 16 at TPC Scottsdale in the WMO is all about us. Look at me, look at me, look at me! Blech. I can’t stand it.

Golf’s roots are austere, as the Scots (to generalize) are an austere people with a cutting sense of humor. That’s our game! Golf is a place to practice discipline, including the discipline of silence. Golf is a place to be precise, in your ability to count and your ability to comport yourself. Golf is a place to be aware of other people, namely your playing partners/opponents and the golfers who are going to play after you, in every sense. These are the fundamental things that define the game’s particular culture, which has survived largely intact for at least 150 years, likely far longer.

All that hooting and hollering, from the fans and the players at 16, is just the game being co-opted by the game-show/reality-show mentality that is such a part of our culture these days. How’s that going for us?

The Masters is the Masters because it has had an absolute grip on the cultural expectations of what it means to be a golfer. That goes back Bobby Jones, the tournament’s founder, who knew that stuff so well. 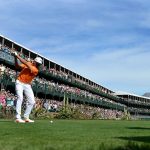 You may also like Viewer’s guide: Tee times, purse and how to watch the Waste Management Phoenix Open

The qualities of restraint that are fundamental to the game have actually, by and large, held up well. So when there are events outside the game’s normal standards, people take notice. The most recent example of that is the four minutes J.B. Holmes took to play the 18th hole at Torrey Pines on Sunday. He showed complete disregard for his competitors. (Jordan Spieth at 13 at the British Open last year was different, starting with the fact that his ball, after his tee shot, was in such an odd and unexpected place.) J.B. Holmes was all me-me-me. All together now: blech. Jack Nicklaus was slow, but methodical. You kind of knew what you were going to get. Holmes basically just grinded to a halt. He violated a fundamental part of the game.

All that noise at 16 does, too. What does it do to improve the competition? Nothing. You could say it is a one-off, and it is. But does this one one-off improve the game? No, it doesn’t.

The mandated diameter for a golf hole has been 4.25 inches since 1891 and was widely used for many decades before that. Any other diameter would be an experiment and a gimmick, a game that is different from the game we know and play and apparently like. Well, decorum is a fundamental part of the game, too. All that noise at 16 just makes golf, for a moment there, more ordinary, more like everything else you see on TV. But golf shouldn’t be like everything else we see on TV.

Have, if you like, the par-3 16th at TPC Scottsdale. I’ll take the par-3 16th at Augusta National, a player on the tee, a still pond, a quiet gallery, a shot — the best shot that guy can muster at that moment — waiting to be played. The player is over his ball, thoughts in his head or not, surrounded by all that silence. It’s beautiful.