‘They’re way better than I am’: Joel Dahmen’s insightful answer to what separates top-10 players

After one round at the Wells Fargo Championship, Joel Dahmen shared the lead at five under with Rory McIlroy. But suffice it to say that’s not getting to his head. Dahmen was asked about how he sees himself versus the top 10 players in the world, and his answer gave insight into that difference — and his perception of it.

“They’re way better than I am,” he began simply. When pressed, he expanded. “I mean, put it this way — like, week in and week out or over the course of a career, they’re going to be way better than I am. But golf is awesome because on any given week or given day, anybody can beat anybody.

“Yeah, like I played as well as Rory today and I beat everybody else in the field. That’s great, and there’s no reason I can’t do that for three more days. I think I’m getting to a point where I actually believe it where all right, you hit it straight enough, you putt well enough, you chip well enough, all that garbage, it’s great. I think there’s just believing in it and there’s believing in it in different levels.”

Dahmen, 31, has been hitting his stride of late. In 2018, he climbed from outside the world top 500 and now sits 125th. While he has contended on Tour — he’s had four top-10s since last summer — it has taken time to get into that winning mindset.

“Is my best as good as Rory’s? Absolutely not. Is my best top-10 in the world? No. But is it good enough to compete week in and week out? Absolutely.” 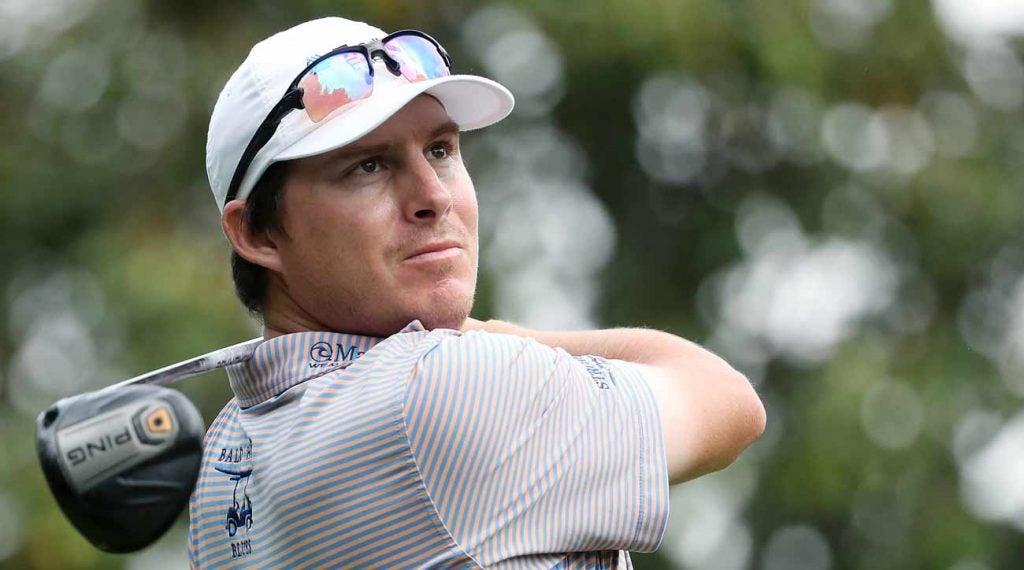 Joel Dahmen definitely isn't letting one round get to his head.
Getty Images

Dahmen’s answer is particularly intriguing because he is, in many ways, the prototypical average PGA Tour player. He’s 31 years old, 5 foot 11, ranks between 50th and 130th in all major strokes gained categories, sits 65th in the FedEx Cup rank and 68th in scoring average. He included Tiger Woods, his playing partner at last summer’s Quicken Loans, on his list of top players.

“Yeah, week in and week out he’ll be one of the best players, absolutely,” he said. “When I played with him, I mean, you can’t win every week, but every time I play with a top-10 player in the world, I think they should win every week.”

There’s one place Dahmen ranks near the top of the golf world: in front of a microphone. On Thursday, he notched several worthy ruminations.

On his mustache: “Well, it started as me celebrating a quarter million dollars at the Players because I was the richest man alive after that day. So I was drunk, shaved it into a moustache and then it just kind of kept going after that.”

On missing the Masters: “I was the only idiot in the world who didn’t watch it. That weekend we have a HackMasters, which is almost more important than the Masters. It’s just a bar tournament and I’ve played it for five or six years now in Scottsdale with a buddy and it starts at 7:00 a.m. and you’re drinking all day.”

On preparing for Bethpage Black: “Do they have a video game for it? I might do that. I’m playing with Lucas Glover this week, I think he won there at the U.S. Open, so I’ll ask him a couple questions. If you hit it on the fairway and on the green and hit it below the hole, I think every golf course is good.”

News
Joel Dahmen reflects on accusing fellow pro of cheating: ‘Unfortunately, I was just the messenger’

Dahmen has now incredibly held three first-round leads in his last five starts (he shot 66 at the Valspar and in Puntacana). But his best result over that stretch is a T12. He’ll look to improve on that this week.

“I want to be in the hunt with nine to play, that’s the goal,” he said. “I haven’t really been there yet. I’m good enough to. I should be there. I should have chances by now. I just kind of need to get out of my own way and let it go.”