Day holed a 6-foot birdie putt in the dark on the fifth hole of a sudden-death playoff Sunday. Noren followed with a 5-foot birdie putt on the par-5 18th hole at Torrey Pines. They had no choice but to return Monday morning to decide the longest playoff in the 67-year history of this event.

They each made birdie three times on the par-5 closing hole in the playoff. They made pars on the 16th and 17th holes, with Day having the best chance to end it on the par-3 16th until his 12-foot putt stayed on the right edge.

Ryan Palmer began the playoff with them at 10-under 278. He was eliminated with a par on the 18th on the first extra hole. 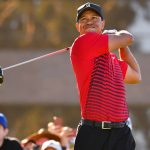 You may also like Tiger’s return raises a familiar question: Is the golf world too fixated on him?

Day closed with a 2-under 70. Palmer hit wedge to 2 feet for birdie for a 72 to get into the playoff. Noren had a 12-foot birdie attempt in regulation to avoid the playoff and narrowly missed.

By then, Tiger Woods was long gone.

It was the third playoff in three weeks on the PGA Tour, all of them lasting at least four holes. And while it was entertaining, thousands of fans weren’t around to see it. They left after Woods finished his round. In only his second PGA Tour event since August 2015, Woods closed with a 72 and tied for 23rd, seven shots out of the lead.

Woods said it was a mostly positive week, and it was hard to argue considering he was returning from his fourth back surgery. He at least was closer to the fairway in the final round, but hit only three fairways for the third straight day.