Dustin Johnson is two shots back at weather-delayed RBC Heritage

It was a long day of golf at the RBC Heritage, where a weather delay prevented a significant portion of the field from finishing the second round.

Here’s everything you missed from Friday’s action at Harbour Town.

Severe weather in Hilton Head, S.C., suspended play beginning at 12:48 p.m. ET, and it turned out to be a lengthy delay for players waiting to get back on the golf course.

At 4:31 p.m. ET, the green light was finally given, but unfortunately it there wasn’t enough daylight left for the entire field to finish the second round, with some players only halfway through. Play was suspended for the day at 7:47 p.m. ET.

Play @RBC_Heritage was suspended due to darkness at 7:47 p.m. #pgatour

Play will resume at 7:45 a.m. ET on Saturday morning, and third-round groupings will be announced once every player has finished and the cut has been made.

With two holes remaining in his second round, first-round leader Shane Lowry is hanging on at the top at nine under par overall — one shot clear of Trey Mullinax, who is the clubhouse leader at eight under par.

Leaderboard @RBC_Heritage when play was suspended:

Lowry is seeking his second career Tour victory this week. 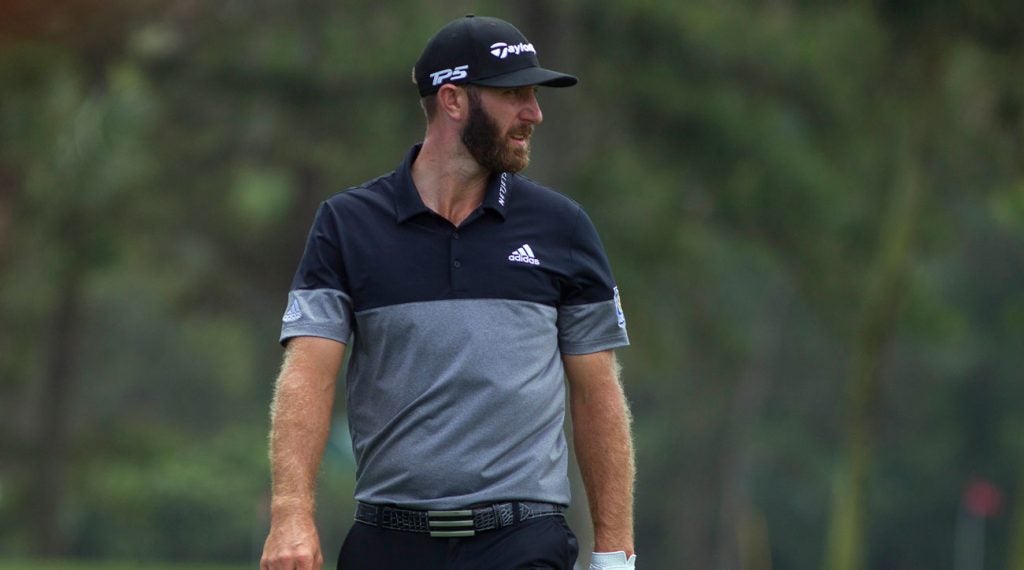 After firing a second round of four-under-par 67 on Friday, DJ is in fine position heading into the weekend. Not only does he get to sleep in while other players have an early wake-up call to finish their rounds, he’s also only two shots shy of Shane Lowry’s lead, at seven under par overall.

DJ can draw it.@DJohnsonPGA moves his ball right to left to grab a share of the lead.#QuickHits pic.twitter.com/oz9nH6BQnh

DJ is chasing his second win of the season, and the 21st of his Tour career. The newly-minted World No. 1 has an incredible six top-ten finishes in nine Tour events this season.

Though a significant number of players still need to finish the second round, the current projected cutline of even par could mean an early exit for some big names.

Bryson DeChambeau is on the razor’s edge at T73 following a second round of two-over-par 73, and one over par overall. He’ll need some help from the players finishing on Saturday morning.

Francesco Molinari is a player who could still change his fate. He’s currently T91 at three over par overall with six holes to play on Saturday.

Jim Furyk is another player who could do something miraculous. With four holes remaining in Round 2, he’s T103 at four over par.

News
Oldies but goodies: Furyk and Fluff still doing it their own way after all these years