It was a wet and soggy day in Pacific Palisades, Calif., where the first round of the Genesis Open was suspended for over seven hours because of excessive rain. Some players did manage to get some holes in by the afternoon, though.

Here’s everything you missed from Round 1 on Thursday. 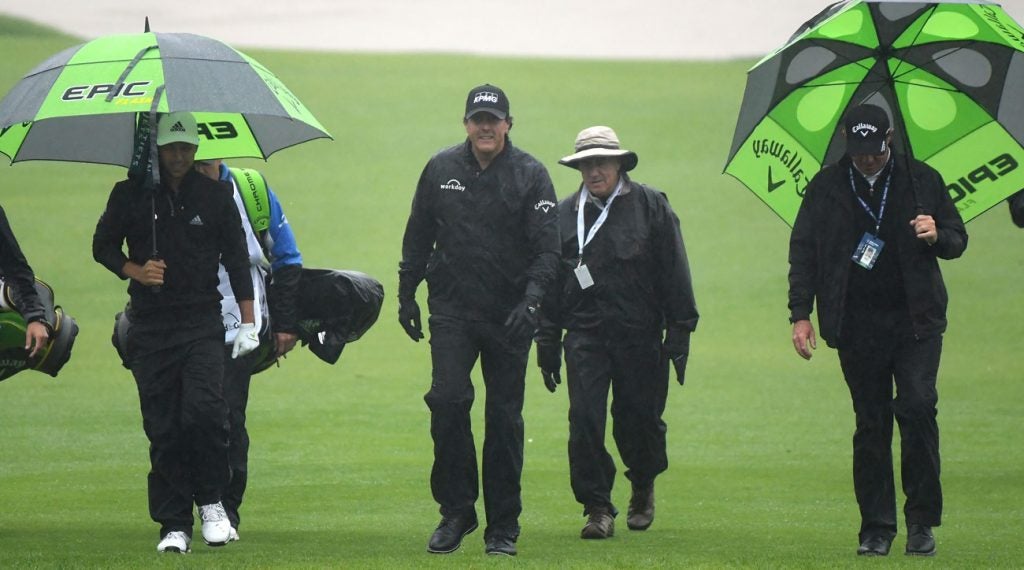 Phil Mickelson walks off the 10th hole after play was suspended on Thursday morning at the Genesis Open.
Getty Images
Rain, rain, came and stayed

While 10 groups optimistically teed off in Round 1 early on Thursday morning, they unfortunately didn’t get very far. Play was suspended at 7:30 a.m. PT, and those groups had to wait seven hours until they were scheduled to go out again.

R1 tee times will begin at 1:40 p.m. PT (a delay of seven hours for the morning wave). The afternoon wave will be adjusted at a later time. @genesisopen @PGATOUR

Tournaments
PHOTOS: Check out our favorite scenes from the 2019 Genesis Open at Riviera
History was made

Interestingly, the Tour decided to wipe out any scores recorded by the players in the ten groups that went out in the early morning downpour — the first time a complete restart has been ordered in over five years.

The last @PGATOUR event to restart a round was the 2013 @DellTechChamp (R3).

Jordan Spieth, Jimmy Walker, Tony Finau and Cameron Champ are just a few of the big names who found a way to post some red numbers once they got back out onto the course.

Spieth had his short game going, as evidenced by this sweet chip-in for birdie on No. 12.

As a quick reminder, Spieth is seeking his first Tour win since the 2017 Open Championship.

Tiger Woods had an unexpected day off

As one of the players with a tee time in the afternoon wave, Tiger didn’t hit a competitive ball on Thursday. He was originally scheduled to play at 12:22 PT, but that starting time will be revised for Friday’s play, as officials look to complete both Round 1 and as much of Round 2 as possible.